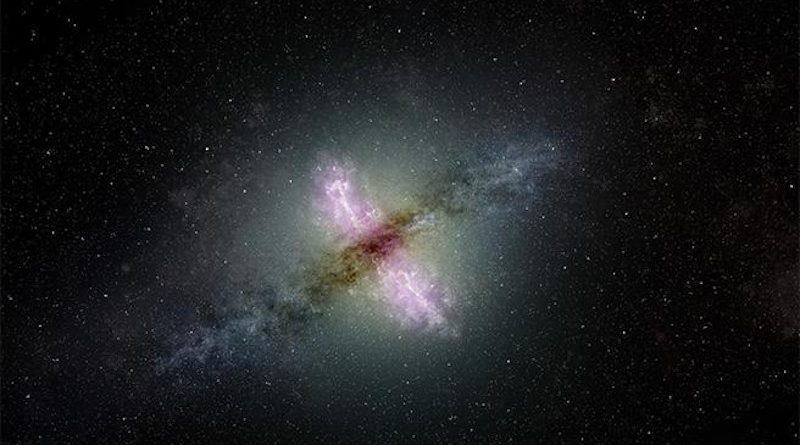 U.S. Naval Research Laboratory researchers led a team of scientists who discovered some of the youngest known radio jets launched by growing supermassive black holes in the centers of distant galaxies.

Watching and recording the jets, which are believed to be only decades old, in their infancy allows researchers to observe their formation and growth and study how they influence their environments.

“Timing and navigation are a fundamental portion of the Navy mission and constitute part of the key infrastructure the DOD relies on,” said Henrique Schmitt, Ph.D., an astronomer at NRL. “Understanding the evolution of jets in active galaxies is important for day-to-day tools like GPS. Such active galaxies define the celestial reference frame from which precision timing and positioning are derived.”

The team discovered the jets after reviewing images from the Very Large Array Sky Survey (VLASS) that contained unusually bright radio sources in comparison to previous studies with the Karl G. Jansky Very Large Array (VLA) in Socorro, New Mexico. The paper was accepted into publication by the Astrophysical Journal.

“This is a new topic that has yet to be fully explored,” said Kristina Nyland, Ph.D., a National Research Council postdoctoral fellow in residence at NRL. “Studying the launching of powerful jets is important for us to understand how galaxies and supermassive black holes grow in tandem over billions of years.”

According to Nyland, older jets shine for millions of years and may extend far beyond the confines of their host galaxies, while newborn jets stay within the boundaries of their hosts. Known as the interstellar medium, this area contains the raw materials that give rise to new stars and planetary systems. It is hypothesized newborn jets may interact with these dense clouds of gas and play an important role in galaxy formation and evolution.

“When you have compact, powerful jets of radio plasma colliding with a reservoir of star-forming gas, the jets may alter the efficiency of new stellar births and the future appearance and properties of the galaxy,” Nyland said. “Studying young jets in particular is essential for understanding our cosmic origins. It is important for us to measure the rate at which new jets are launched by supermassive black holes to ultimately understand how they influence the lives of the galaxies in which they reside.”

Living on the grid

Reference points on the grids can change in appearance over time. Researchers are trying to fill in sparse areas of the grid by coupling an optical reference frame to the celestial reference frame. However, the physics of the optical and radio energy emissions from the supermassive black holes are not fully understood. These emissions look different over time and researchers find that when optical and celestial grids are overlaid they do not always match up perfectly.

“Without understanding the physics of those radio sources, what you see is those two reference frames don’t always line up,” said Tracy Clarke, Ph.D., a radio astronomer in NRL’s Remote Sensing Division. “That’s because we are looking at a different part of the radio source compared to the optical host galaxy–they are shifted a bit.”

“Understanding the source of radio emission from AGN is a key area of interest to the USNO and the Navy, and helps us better understand the nature of the quasar sources that comprise the International Celestial Reference Frame,” said Megan Johnson, Ph.D. at USNO.

Numerous studies are underway to gain a better understanding of the physics. That information could be used to build a more comprehensive and predictive reference frame. Navy assets can utilize the reference frame in a GPS constrained environment. To do that, researchers want to give operators the sources of bias in a fixed grid (such as a shift in brightness in one of the jet sources) to offset the reference frame.

“The physics of what Kristina Nyland is doing helps us understand how to tie those two reference frames tightly together, and that’s going to give the Navy a fantastic multiwavelength reference frame,” Clarke said.

VLASS is building a richer understanding of space by combining imagery and data of the entire sky visible from a telescope taken multiple times over several years. NRL is supporting the VLASS through commensal observations with the VLA Low Band Ionosphere and Transient Experiment (VLITE), operated out of NRL. VLITE is a powerful addition to the survey, providing complementary information on radio source properties over a different range of frequencies and spatial scales.

“While VLASS data have allowed the discovery of these newly formed jets, understanding the history of galaxy evolution may require additional radio data,” Clarke said. “This is where VLITE comes in. VLITE operates at longer observing wavelengths and observes in parallel to VLASS.”

Clarke believes VLITE is a powerful addition to the survey since it provides complementary information on radio source properties that allows NRL researchers to better understand the evolution of the supermassive black hole that is powering each newborn radio jet.

Nyland is leading the research project in the remote sensing division of NRL through the NRC postdoctoral fellowship program. She continues to study the newborn jets and observe how they change over time.

“This research contributes overall to human exploration,” said Nyland. “It contributes to a richer understanding of fundamental physics and the fascinating link between supermassive black holes and galaxy evolution.”