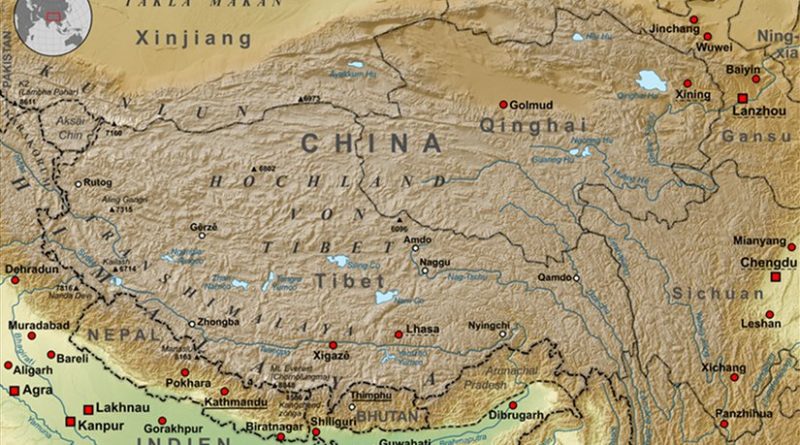 Traditional Tibetan culture has always been united by the twin banners of ethnicity and religion, which [when the ruling Chinese Communist Party took power in 1949] were in the keeping of the highest-ranking members of Tibetan society. It was impossible for outsiders like Han Chinese to seize hold of them.

If the Chinese Communist Party was going to control Tibet, it needed to succeed in dividing Tibetans and in winning over the lowest-ranking Tibetans. If it could achieve that, it would be able to wage a class war among this ethnic group.

The Communist Party were past masters of class struggle. If they could draw a line dividing social classes … Tibetan society would be torn in two.

There are rich and poor among all ethnic groups, as well as oppression and exploitation.

According to party logic, the poor people of the world were all part of the same family, while the rich were all carrion crows. Religion was the opiate that the rich used to numb the masses and keep them in line.

Once the banner of class struggle was raised, the Chinese Communist Party would cease to be the party of the Han Chinese, and become the leader and the mouthpiece for poor people everywhere, winning poor Tibetans away from religion and ethnic identity, or so the thinking went.

Then they would be able to direct poor Tibetans to overthrow the Tibetan elite and cast down the banners of religion and ethnicity like the last tree in a forest.

They wanted to disrupt the previously harmonious relations between the different classes in Tibetan society, replacing it with class struggle and a desire for revenge, so that Tibetans would turn their former leaders into “enemies of the people” and replace them with Chinese masters.

And so China sent out working parties to encourage ordinary Tibetans to tell their stories of oppression and to seek revenge.

They asked them: Why are the children and grandchildren of farming families so poor, while the farm owners eat well, wear nice clothes, and have plenty to spare? Just whom does the Tibetan government serve, and who is it protecting? Is suffering predetermined? and questions of that kind.

History had shown that the majority of Tibetans tended to follow their own elite unquestioningly, something which had a lot to do with religious notions of karma and reincarnation.

Historically, poorer Tibetans hadn’t been very keen on any revolution led by the Chinese Communist Party, out of a fear of karmic retribution, to the extent that they followed their elite into battle against the People’s Liberation Army (PLA) forces that came to “liberate” them [in 1950].

In the end, though, however deeply Tibetans felt the influence of their religion and culture, these were still a form of acquired behavior rather than part of that innate human tendency to act in one’s best interests and avoid harm.

The divisive politics of class struggle and the redistribution of property and privilege as practiced by the Chinese Communist Party improved the lot of the majority of low-ranking Tibetans, easing the suffering which they had traditionally regarded as their fate.

For this reason, it was bound to attract large numbers of Tibetans to the Chinese cause. For example, the party offered debt forgiveness programs canceling out burdens that could remain hanging over several generations. How could this not be welcome?

Against this background, the elite were no longer in a position to say no to revolution from their own people. Indeed, some of them would become apologists for the Communist Party and offer to implement the reforms in their own backyard.

And the lower classes, seeing that their elite had come to no good end and recognizing the mighty power of the Chinese government, cast aside their reverence for their elders and officials as if it meant nothing, and fought for their own interests alongside the Communist Party with all the courage of a people that has trampled its former masters underfoot.

Tibetans in exile, however, have always dismissed the “democratic reforms” pursued in Tibet by the Chinese Communist Party out of hand.

But the idea of “the people” is just that, and takes no account of the huge diversity contained within it, all the different views and opinions, all the more so when they have been subjected to a divisive class struggle.

On June 28, 1959, the preparatory committee for the Tibet Autonomous Region sat, with 600 delegates from every rank of society, including some serfs who were made “farmers’ representatives.” This was the first time this had ever happened in Tibet’s history.

Of course all of the delegates who attended the meeting were chosen by the Communist Party, and they were there for show.

But the power of the elite had weakened, and for Tibetan farmers to sit there and debate the future of Tibet under the same roof as their nobility was an honor beyond their wildest dreams.

This huge change gave them great encouragement, and they voted at that meeting to pass the motion implementing “democratic reforms” in Tibet.

*Wang Lixiong is a Chinese writer, historian and social activist specializing in the histories of the Tibetan and Xinjiang regions under Chinese control. Married to Tibetan poet and writer Tsering Woeser, Wang views the Dalai Lama and his advocacy of genuine autonomy for the Himalayan region under Beijing’s rule as the key to resolving conflicts between Tibetans and the ruling Chinese Communist Party.