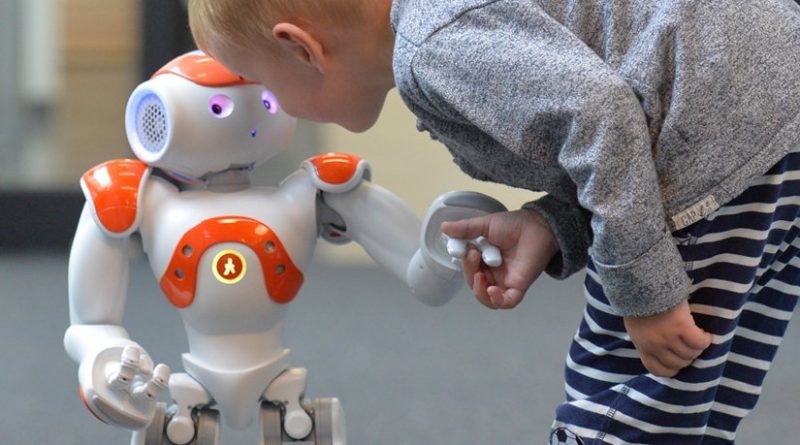 In a new EU project, Bielefeld researchers are investigating how the robot Nao can help children learn a language. Photo: CITEC/Bielefeld University

According to the Federal Statistical Office, one-third of children under the age of five in Germany come from immigrant families. Could technical assistants be used to help prepare immigrant children for school and teach them the new language? L2TOR, the new project financed by the European Union, is researching that very question.

The project will launch in January 2016 and will run for three years. One research group at the Cluster of Excellence Cognitive Interaction Technology (CITEC) of Bielefeld University wants to provide tutoring systems with Tablet-PCs and robots that can assist in language learning. To do this, researchers are developing modules that recognize a child’s language abilities and motivation so that the robot can react individually to each child.

Computer scientists, educators, and linguists are working together on this project in a consortium of five universities and two companies. Plymouth University in Great Britain is coordinating the research. The abbreviation L2TOR (pronounced ‘el tutor’) stands for ‘Second Language Tutoring Using Social Robots.’

“We are investigating how interactive robots can be used to help teach children between the ages of 4 to 6 a second language,” said Professor Dr. Stefan Kopp, who heads the research group Social Cognitive Systems, which belongs to the Faculty of Technology and is part of CITEC. “We are working to provide children with the language abilities that they need for school.”

Kopp’s team is cooperating with day care centers from around the Bielefeld region, where researchers are testing how their robots perform as language tutors. The company Aldebaran from Paris is a project partner who is producing the humanoid robot Nao. Combined with a Tablet PC, Nao is designed to lead children through a language course.

“When it comes to teaching the basics of a language, a robot can also have a positive impact,” said Dr. Kirsten Bergmann, who works in Kopp’s research group. “It is important that the robot recognizes how the child being taught feels, and whether he or she is frustrated or confused, for example. We program the robot so that it can shape its interaction with the child so that he or she is being supported in the best way possible.”

While teaching, Nao pays attention to what the children say, along with their facial expressions and gestures, and helps when they do not understand. Course content covers vocabulary and simple grammatical structures. Researchers will test how Nao may be able to help children learn to form sentences. To do this, difficult types of words such as prepositions (i.e. spatial expressions like ‘in,’ ‘on,’ or ‘next to’) are also taught.

“Children could ultimately be prompted to tell the robot a short story based on pictures displayed on a Tablet,” said Kopp. “The individualized language support provided by the robot complements the existing resources available in day care centers. It lets us give immigrant children the chance to acquire their new language in a playful way. This also goes for German children first experiencing a foreign language, such as English.”

Bielefeld University, Plymouth University in the United Kingdom, Tilburg University and Utrecht University in the Netherlands, and Koç University in Turkey, along with industry partners Aldebaran Robotics in France and Qatar Belgium Modern Technologies (QBMT) in Belgium are cooperating on this project. While CITEC researchers are working with children in Germany, colleagues at the other partner universities are working on language tutoring for children in England, Turkey, and the Netherlands. The European Union is funding the project with a total of three million Euro, 355,000 Euro of which is allocated to Bielefeld.