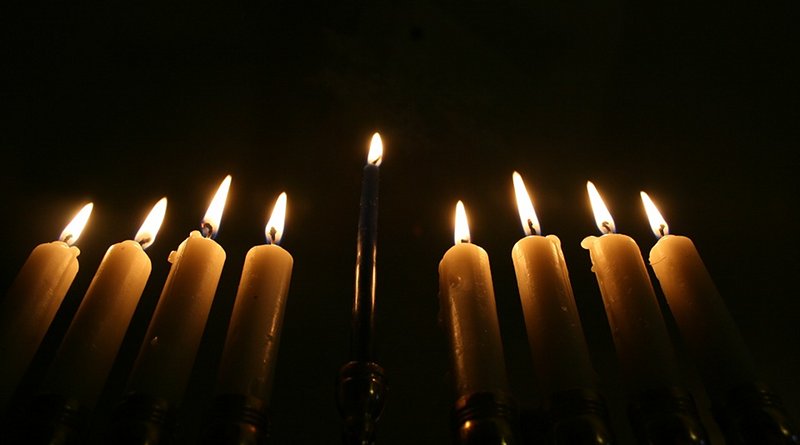 Why do Roman Catholic and Eastern Orthodox Bibles contain two different books about the historical events that led to the Jewish festival of Hanukah, while the Hebrew Bible doesn’t have even one? Because the Christian Church Fathers believed that there were valuable spiritual lessons to be learned; even from a history of military struggles.

All of us need to avoid negativity and despair, especially at times of persecution and oppression; and the best way to do that is to retain, and then strengthen, our trust in God and our hope for the future.

In Arabic, the word Jihad is a noun meaning the activity of “striving and/or persevering.” According to Prophet Muhammad there are two types of Jihad: minor and major. Once when Muslims were returning from a military expedition, which for him was a minor jihad, he told the fighters that now they had to go through the major jihad.

When Prophet Muhammad was asked what he meant by major jihad, he said it was the spiritual jihad. On another occasion, he said the real mujahid is the one who declares jihad against his/her carnal soul. (Tirmidhi).

Exercising self-control and using willpower and reason to overcome one’s anger is described by Prophet Muhammad as “the major jihad.” The message is clear: overcoming our own feelings of hatred and anger is much more difficult than overcoming our enemies.

In today’s world of fanaticism and extremism the words of Al-Ghazali, a 12th century Persian Muslim theologian, need to be repeated by all the world’s religious and political leaders: “Declare your jihad on thirteen enemies you cannot see – Egoism, Arrogance, Conceit, Selfishness, Greed, Lust, Intolerance, Anger, Lying, Cheating, Gossiping and Slandering. If you can master and destroy them, then you will be ready to fight the enemy you can see.”

The Jewish celebration of Hanukah is an excellent example of both the minor Jihad of physical warfare and the major Jihad of spiritual self-control and perseverance. Every year in December (starting the evening of December 22, this year), Jewish people throughout the world will celebrate the eight-day holiday of Hanukah. If you ask any Jew to tell you how Hanukah began, or why Jews celebrate this festival for eight days, he or she will relate the following story.

Once a Syrian Greek king polluted the Holy Temple in Jerusalem by erecting a statue of himself in it and telling the Jewish people that he (the king) was the embodiment of God. The Jews rebelled and after more than three years of fighting, Judah the Maccabee and his warriors recaptured the holy Temple in Jerusalem and began to purify its alter. Unfortunately, all the pure olive oil for the lamp that should burn continuously had been polluted except for one little jar of oil that miraculously burned for eight days.

This Hanukah story is about two kinds of battle: the physical struggle (political and sometimes military) against others; and the spiritual struggle within ourselves to trust in God and not to despair in times of persecution (represented by the oil).

When the Maccabees recaptured and rededicated the Temple in Jerusalem in 164 BCE, the physical struggle for religious freedom and independence did not end. It went on for another 20+ years until full independence was attained. But the spiritual struggle seemingly lasted only eight days.

Let us look more carefully at the oldest written sources around this story. About four or five decades after the first Hanukah, two books were written about the Maccabean Wars and the rededication of the Holy Temple in Jerusalem. The First Book of Maccabees, compiled sometime before 130 BCE, was originally written in Hebrew. Today all we have is an early Greek translation. Its intended audience was the Jewish community in the Land of Israel. It describes the recapture of the Jerusalem Temple, its purification and its rededication (Hanukah in  Hebrew).

“They also made new sacred vessels, and they brought the lamp stand … into the Temple. They burned incense on the altar and lit the lights on the lamp stand, and the Temple was filled with light.… For eight days they celebrated the dedication of the altar. … Then Judah, his brothers and the entire community of Israel decreed that the days of rededication of the altar should be celebrated with a festival of joy and gladness at this same time every year beginning on the 25th of the month of Kislev and lasting for eight days” (First Maccabees 4:49-59).

This first ancient source does not mention the “little jar of oil” miracle. At that time, the miracle was the military victory itself; that God had enabled the Jews in Israel to physically and militarily defeat the far mightier Syrian Greek Empire.

The Second Book of Maccabees was compiled a decade or two after First Maccabees and covers most of the same period. It was written in Greek for the Jewish community outside the land of Israel. That Jewish community, whose primary language was Greek, was concentrated largely in the Egyptian port city of Alexandria.

The purpose of Second Maccabees, as stated in the two letters that open the book, is to urge the Jews of Alexandria to adopt this new festival. The author states that his source for the history of the Maccabean war was a (now lost) larger five-volume history by one Jason of Cyrene. Second Maccabees describes the purification of the Temple, adding significant information that is not found in First Maccabees:

“Judah the Maccabee and his men, under the Lord’s leadership, recaptured the Temple and the city of Jerusalem. … After purifying the Temple, they built a new altar; made a new fire; … offered sacrifices and incense … and lit the lamps. … On the anniversary of the very same day on which the Temple had been defiled, the 25th of Kislev, they purified the Temple.

“They celebrated joyfully for eight days, just as on Hajj Sukkot, knowing that (only two months before) on Hajj Sukkot they had spent the festival (hiding) like wild animals in the mountains and caves. That is why they now came carrying palm fronds and fruit, and singing hymns of praise to God, who had given them the victory that brought about the purification of His Temple.

“By a vote of the community they decreed that the whole Jewish nation should celebrate these festival days every year” (Second Maccabees 10:1-8).

The story of the small jar of oil that lasted much longer than anyone expected is not mentioned in the early sources because they focus on the physical military Jihad battle to liberate the Jerusalem temple from Greek rule and restore Jewish political independence.

However, two and a half centuries later, the Holy Temple and Jerusalem itself were in ruins. In the generations following the destruction of Jerusalem by the Romans in 70 CE, the Jewish people could have despaired. They might even have lost faith in the one and only God when the Romans built a new pagan city on Jerusalem’s ruins, with a Roman Temple filled with statues of Roman Gods in its center.

So the rabbis started emphasizing the spiritual internal Jihad battle needed for Jewish survival. Everyone, even small children, need to believe in a better future. All of us need to avoid negativity and despair, especially at times of governmental persecution and oppression. Everyone needs to retain their trust in God and their hope for the future.

The rabbis now taught that when the Maccabee soldiers realized it would take a week or more to produce the ritually pure olive oil needed for the lamp that must burn continually before the Holy Ark, most of them wanted to delay the Hanukah celebration, because they feared disappointing and dismaying their supporters if the light went out and spoiled the eight day celebration.

Only a minority led by a young child favored using the little jar of oil that they found, and trusting that somehow it would be enough. As the rabbis expressed it in the Talmud (Shabbat 21b): “Why Hanukkah? Our rabbis taught: ‘On the 25th day of Kislev begin the eight days of Hanukkah on which mourning and fasting are forbidden.

“For when the Greeks entered the Temple, they defiled all the oil; and when the Maccabees prevailed and defeated them, they searched and found only one jar of oil with the official seal of the High Priest, but which was only enough for one day’s lighting. Yet a miracle occurred, and they lit the lamp with it for eight days. The following year these days were decreed a festival with the recital of Psalms and thanksgiving.”

Notice that the miracle is two fold. That the oil lasted is a physical miracle. That they still lit it, thinking that it couldn’t last, is the spiritual miracle. To this day Jews still use one candle to ignite all the other Hanukah candles.

The oppression of Judaism by Antiochus IV, the Syrian Greek king, was the first known attempt at suppressing a minority religion, but unfortunately not the last. Other well known attempts were the three century long Roman persecution of Christianity; and the terrible persecution of Muhammad and his followers by the majority of pagan Arabs in Mecca.

All three religions emerged from their varying periods of persecution stronger than ever, and this is the ongoing spiritual lesson of the Hanukah lamp that long ago filled believers with hope and trust in God; and lasted longer than anyone thought possible.

People who are oppressed by political governments today, such as the Rohingya of Myanmar and the Uighurs in China’s Xinjiang Province, need to remind themselves of the lessons of Hanukah and to trust that the greater spiritual Jihad is more important than the lesser Jihad of power and force.

The proof? Jews, Christians and Muslims are still here, long after the physical attempts to snuff them out – just like the oil lights of Hanukah.

One thought on “Hanukah And Religious Minorities Under Oppression – OpEd”