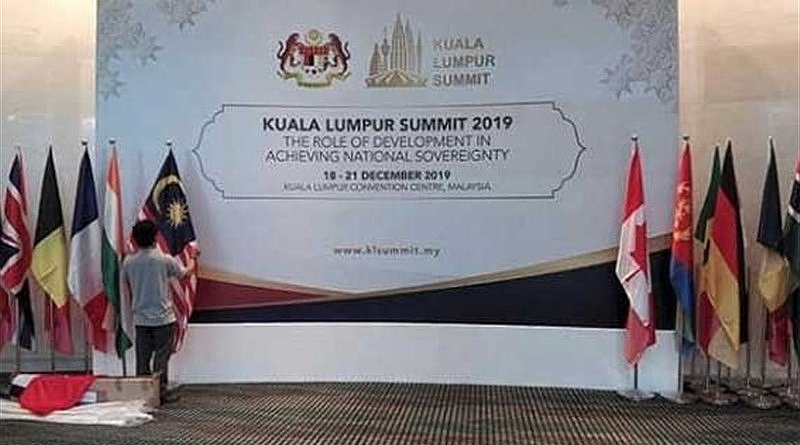 Contrary to the expectations of many Pakistanis, Prime Minister Imran Khan opted not to attend Kuala Lumpur Summit. The overwhelming perception is that that Khan decided to stay away from the Summit under the pressure of Saudi Arabia. It is no secret that the Kingdom has been extending help to the incumbent government to avert the economic crisis, ever since Khan came into power.

Reportedly, Khan had telephoned his Malaysian counterpart Mahathir bin Mohammad to express his regrets for not being able to attend the summit. He also conveyed the same to Turkish President Recep Tayyip Erdogan, who was also one of the driving forces behind the event.

It is worth noting that Pakistan was one of the first countries with whom Mahathir shared his plans for holding the summit, when he met Khan along with Erdogan on the sidelines of the UN General Assembly session in New York in September. Khan formally conveyed his acceptance of the invitation for attending the summit when deputy Foreign Minister of Malaysia called on him in Islamabad on 29th November.

Prior to the commencement of Summit, a statement issued by Malaysian Prime Minister’s Office saying, “Dr. Mahathir appreciates Prime Minister Imran Khan’s call to inform of his inability to attend the summit where the Pakistani leader was expected to speak and share his thoughts on the state of affairs of the Islamic world.”

There is a dire need to read the explanation put forward by Pakistan’s Foreign Minister, Shah Mehmood Qureshi. He confirmed that Saudi Arabia and the United Arab Emirates had concerns about the Kuala Lumpur Summit. They were worried that the event could cause fragmentation of Ummah and lead to setting up of another organization parallel to the existing Saudi-dominated Organization of Islamic Cooperation.

It is on record that prior to the commencement of Summit, Mahathir told reporters in Kuala Lumpur that Saudi King; Salman bin Abdul Aziz was averse to the Summit discussing issues facing the Muslims. Saudi King was of the view that the OIC should continue as the platform for discussing such matters.

In view of the reservations about the event, Qureshi said, it was decided that Pakistan would first attempt to bridge the gap between Riyadh and Kuala Lumpur and if that did not work there would be no participation in the Summit.

Foreign minister explained that Pakistan did attempt to patch up the differences and succeeded not only in getting invites for Saudis and Emiratis, but also convinced Mahathir to personally visit Riyadh and directly invite King Salman. Mahathir’s visit could not be scheduled because the dates proposed by Riyadh were not convenient for him to undertake the trip.

He also informed that Khan visited Saudi Arabia in an attempt to bringing Saudi Arabia and Malaysia closer, and not for getting a permission to attend the summit. Qureshi was of the view that by staying back, Pakistan had underscored its neutrality on the issue and conveyed that it was not inclined towards one side or the other.

According to media reports from the Malaysian capital, Mahathir and King Salman held a video conference to discuss Saudi reservations even after Pakistan had officially pulled out, but no common grounds could be found.

It was anticipated that two of the world’s most outspoken leaders, Malaysia’s Prime Minister Mahathir Mohamad and Turkey’s President Tayyip Erdogan would be giving their views during the four-day summit. Iranian President Hassan Rouhani and Qatar’s Emir Sheikh Tamim bin Hamid Al-Thani, two countries having tense relations with Saudi Arabia, were invited to attend the Summit.

Saudi Arabia was of the opinion that Summit was the wrong forum to discuss matters of importance to the world’s 1.75 billion Muslims.  Saudi King Salman believed that such issues should be discussed through the Organization of Islamic Cooperation (OIC).

However, some analysts suspected the Kingdom feared being diplomatically isolated by regional rivals Iran, Qatar and Turkey. A quote of James Dorsey, a senior fellow at S Rajaratnam School of International Studies and Middle East Institute in Singapore just can’t be overlooked.

He said, “The issue is that you’ve got blocs. “You’ve got a Saudi-UAE bloc, Turkey-Qatari bloc, and Pakistan in the middle trying to hedge their bets.”

Defending the summit, Mahathir’s office issued a statement saying there was no intention to create a “new bloc as alluded to by some of its critics”.

“In addition, the Summit is not a platform to discuss religion or religious affairs but specifically to address the state of affairs of the Muslim Ummah,” it said.

However, one just can’t ignore what Mahathir had told Reuters. He had expressed frustration with the OIC’s inability to forge a united front and act decisively.