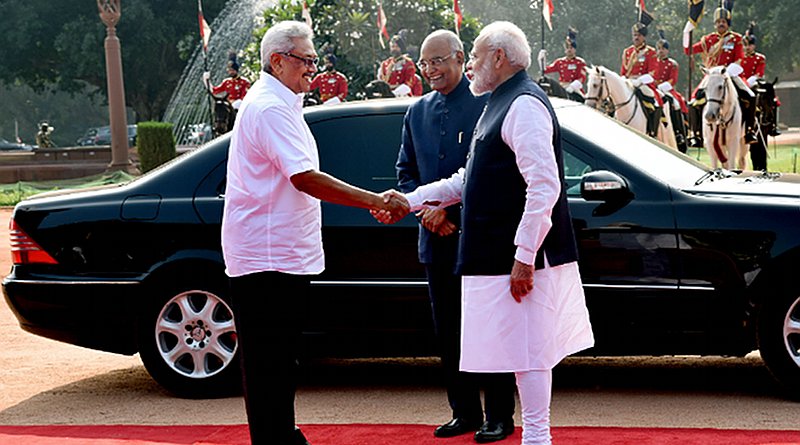 A quick succession of developments last month have generated hopes of a reset in India’s relations with Sri Lanka. First, Gotabaya Rajapaksa had a decisive win in the presidential election. Then he was sworn in at the Ruwanweli Saya temple, which commemorates the legendary victory of a Sinhalese warrior-king over a Chola invader.  External Affairs Minister (EAM) S. Jaishankar air-dashed to Colombo to meet the new president, who returned the gesture with similar alacrity by making India the first foreign country he visited. How optimistic is it to expect changes in this vital and complex relationship in light of the hard realities?

During the tenure of Mahinda Rajapaksa (Gotabaya’s elder brother) as president from 2005-2015, Sri Lanka’s visible policy tilt towards China became a cause for serious concern in India. The coalition government, led by President Maithripala Sirisena (the Sri Lanka Freedom Party) and Prime Minister Ranil Wickremesinghe during 2015-2019 did initially improve relations with India. But the government’s functioning was marked by serious internal tensions. It left behind a weak economy. The Easter Sunday bombings (April 2019) led to a  major security crisis. Earlier, the leasing of the Hambantota Port to China for 99 years caused widespread anxiety.

Given the history of the relationship, the Indian external affairs minister’s visit to Colombo was more a conscious decision than an impulsive act. The Modi government had kept open its channels of communication with the Rajapaksa camp. Mahinda Rajapaksa had a candid and fruitful meeting with the prime minister in September 2018 while the Indian security and political establishment knew Gotabaya Rajapaksa well in his earlier avatar as defence secretary under his brother’s dispensation. Also, when the recently concluded Sri Lankan presidential election came around, New Delhi adopted a hands-off approach.

The minister not only conveyed Prime Minister Modi’s congratulations and the invitation to visit India, but he also laid out clearly New Delhi’s terms and expectations for the reset desired by both sides. He stressed India’s continuing adherence to the ‘Neighbourhood First’ policy and the fundamentals of the Security And Growth for All in the Region (SAGAR) doctrine.  Sri Lanka has a special role to play in both policy frameworks.

At the same time, the Indian minister articulated India’s continuing interest in the new Sri Lankan leadership promoting national reconciliation, leading to “a solution that meets the aspirations of the Tamil community for equality, justice, peace and dignity”, as the official spokesman put it.[1]

New Delhi drew comfort from President Gotabaya’s assertion that he intended to serve as the president of all Sri Lankans, not just of those who voted for him. Some critics have averred that this is all just for form’s sake, insinuating that India is no longer interested or able to do much on the Tamil issue. This is an erroneous perception. India is committed to the welfare of all communities in Sri Lanka, but the Tamils have had a very close and deep connection with India.  Equally,  the pressing political compulsions of the Bharatiya Janata Party, the national ruling party  in Tamil Nadu, cannot be ignored. Gotabaya Rajapaksa’s win polarised the Sri Lankan polity sharply and he may not want to devolve powers to the provinces, but India’s imperatives will not change.

His political inclinations notwithstanding, the new Sri Lankan president won a wonderful photo opportunity by choosing Delhi over Beijing as his first foreign destination. Had he gone to China first, he may have blotted his copybook in Indian eyes. But to go beyond the optics, he gave several public assurances, conscious that he will be judged by them in the coming months. Key among them were:

Reciprocating the visiting president’s goodwill and positivity, Prime Minister Modi declared that India is Sri Lanka’s “closest maritime neighbour and a trusted friend”, while emphasising New Delhi’s basic policy goal: “A stable, secure and prosperous Sri Lanka is not only in India’s interest but also in the interest of the entire Indian Ocean region.”[3] Backing his words with concrete decisions, he made announcements of:

Critics may yet argue that this package pales into relative insignificance, considering the massive ongoing inflow of credits and investments from China for projects in Sri Lanka. While no third country can hold a veto on the sources of assistance, Sri Lanka must assess for itself the obvious dangers of excessive dependence on one country solely. The new president’s avowed plan then to renegotiate with China the terms of the Hambantota Port, the aim being to cancel the 99-year lease, is certain to be watched with close interest.

The two countries share an array of preoccupations, such as:  the Indian Ocean as a zone of peace; regional integration in South Asia; the future of the South Asian Association for Regional Cooperation (SAARC); ways to rejuvenate the Bay of Bengal Initiative for Multi-Sectoral Technical and Economic Cooperation (BIMSTEC); and expanding bilateral economic cooperation between India and Sri Lanka. Their paths converge in some areas, and not in others. The good thing is that the two political leaders have launched a new conversation.

Now, Indian and Sri Lankan diplomacy will have to navigate the choppy waters ahead with pragmatism. Keeping two aspects in mind may serve them well:

First, Sri Lanka, which is committed to expanding and accelerating its development, wants to change how it finances it, shifting from credit to investment as its principal vehicle. It is open to receiving investments from everywhere, but will need to woo India more actively – given the prevailing negative perceptions regarding security, corruption and lack of ease of doing business in Sri Lanka. Yet, over-indulged by Chinese investors, Colombo may not be interested in wooing Indian business.

Second, a clearer assessment of the scope and pace of the reset India-Sri Lanka relationship will be possible after President Gotabaya’s visit to China. Events there may have a direct bearing on how the Delhi-Colombo rapprochement shapes up.

*About the author: Rajiv Bhatia, Distinguished Fellow, Gateway House, is a former Ambassador. He served as Joint Secretary, Bangladesh, Sri Lanka, Maldives and Myanmar (BSM) Division in the Ministry of External Affairs during 1991-94.

[3] Ministry of External Affairs, “Translation of Press Statement by Prime Minister during State Visit of President of Sri Lanka to India”, Government of India, 29 November 2019, https://www.mea.gov.in/Speeches-Statements.htm?dtl/32126/Translation_of_Press_Statement_by_Prime_Minister_during_State_Visit_of_President_of_Sri_Lanka_to_India.