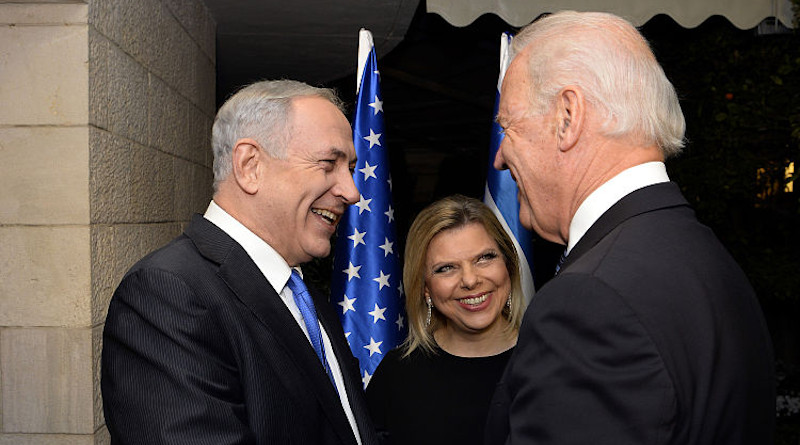 US Vice President Joe Biden is greeted by Israeli Prime Minister Benjamin Netanyahu and his wife, Mrs. Sara Netanyahu, upon arrival for his bilateral meeting at the Prime Minister's residence in Jerusalem on January 13, 2013. [State Department photo by Matty Stern/ Public Domain]

President-elect Joe Biden will take office in January facing a Middle East different from the one he left in 2017 as vice president during the Obama administration. What are the legacies left by President Donald Trump, and how might U.S. policy in the region change under the new administration? Here are several key points.

During his term, Trump secured the Abraham Accords, normalization agreements between Israel and its Arab neighbors, the United Arab Emirates and Bahrain.

Heralded by Trump as “the dawn of the new Middle East,” the accords altered the decades-long regional perception that Arab-Israeli peace could be achieved only after the question of Palestinian statehood was addressed. They reflect Israel’s improving ties with its Arab neighbors as they unite against Iran, a mutual enemy weakened by Trump’s maximum pressure campaign of sanctions.

The deals also signal that allies have accepted the reality of reduced U.S. engagement in the Middle East that was initiated under President Barack Obama, maintained by Trump and likely to be continued by Biden.

Gulf states are unsure about long-term U.S. regional commitments and are looking for ways to enhance their own security, said Alex Vatanka, director of the Iran program at the Middle East Institute. “That’s one of the things they hope to achieve with a friendship with Israel.”

Biden praised the Abraham Accords as a “historic step to bridge the deep divides of the Middle East” but added a caveat for the Palestinians’ plight.

“I believe that Israel has to be prepared to work toward a genuine two-state solution,” Biden said to VOA during his presidential campaign in September.

A Biden campaign statement pledged to “urge Arab states to move beyond quiet talks and take bolder steps toward normalization with Israel,” but analysts predict there will not be the same level of urgency.

“I’m not sure if personally, Biden will prioritize those kinds of negotiations in the same way that the Trump administration did,” said Natasha Hall, senior fellow with the Middle East Program at the Center for Strategic and International Studies (CSIS).

While Biden plans to restore U.S. aid to the West Bank and Gaza cut off by Trump, he has indicated he will not roll back his predecessor’s policies on Israel, including the relocation of the U.S. Embassy to Jerusalem and recognition of the Golan Heights as Israeli territory.

Despite the shift in regional strategic alliances, Trump is leaving office amid renewed tension with Iran following the assassination of its top nuclear scientist, Mohsen Fakhrizadeh.

Tehran blames Israel for the attack, which Israel neither denies nor confirms. The White House did not comment on the killing, but Trump retweeted an Israeli journalist who wrote Fakhrizadeh was “head of Iran’s secret military program and wanted for many years by Mossad.”

“What I suspect will happen is the regime will keep a restraint on themselves the way they did after the assassination of Qassem Soleimani and wait for the Biden administration to come in and see if they can cut some kind of deal with him,” he said.

The Fakhrizadeh assassination may complicate Biden’s plan to return to the Joint Comprehensive Plan of Action, the Obama-era deal that suspends Iran’s nuclear program in exchange for sanctions relief. Trump withdrew from the JCPOA in 2018.

A return to the JCPOA is already problematic under the current political landscape with more hardline candidates running in the Iranian presidential election in June, Hall said.

“Building back that trust with Iranian leaders is going to be quite difficult without some kind of back-channel negotiations, or even a symbolic sort of compensation for what’s happened with the sanctions,” she said.

Trump, who campaigned on ending “forever wars,” is pushing to reduce U.S. military presence from conflict areas around the world before he leaves office.

In mid-November, acting Secretary of Defense Christopher Miller said Trump had ordered troops reduced from 4,500 to 2,500 in Afghanistan, and from 3,000 to 2,500 in Iraq.

Like Trump, Biden has pledged to end “forever wars” in the Middle East and Afghanistan, focusing only on the al-Qaida and Islamic State terror groups and ending support for the Saudi-led war in Yemen.

Analysts warn that a decreased military presence in the region has repercussions.

Under the current administration, Arab countries saw opportunities with what some analysts call the president’s “transactional foreign policy” — one designed to further Washington’s interests in line with Trump’s “America First” doctrine in exchange for carte blanche on issues such as human rights, democratization and good governance.

“There was a sigh of relief in many of those Arab countries, because many human rights violations were basically completely swept aside,” said Merissa Khurma, program manager of the Middle East Program at the Wilson Center. “That made it even more compelling for these countries to strengthen their relationship with the United States.”

Despite a pledge to “revitalize our national commitment to advancing human rights and democracy around the world,” the Biden administration is not expected to aggressively demand these traditionally important issues in U.S. foreign policy.

“I don’t think this would be a presidency that says human rights or nothing else,” Vatanka, of the Middle East Institute, said. “Human rights hopefully will come back into the conversation, but I don’t expect it to be the top of the agenda.”

One important issue to watch is U.S.-Saudi relations. On the anniversary of the killing of Saudi-born activist and journalist Jamal Khashoggi in October, Biden said ties with the kingdom require “reassessment.” What that entails may deter the biggest and wealthiest country in the region from formally joining the new alignment with Israel.

While Trump prefers bilateral relations that are often based on his personal ties with foreign leaders, Biden is expected to adopt a more multilateral approach in engaging allies.

“People are not anticipating a sharp change in U.S. foreign policy toward the region, but certainly a different tone and different type of engagement,” Khurma said.

The region is also expecting a more stable foreign policy under Biden.

“To be predictable, or at least somewhat predictable,” Vatanka said. “Transactional foreign policy created too much chaos. Everybody was looking to jockey for the best position possible, and that is not the best place for the United States to be in.”

Home » How Will US Middle East Policy Change Under Biden? – Analysis