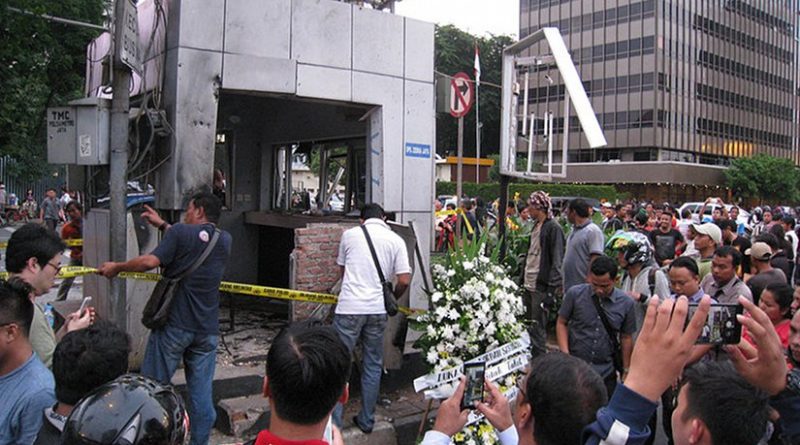 The terrorist episode on 14 January 2016 at a busy commercial hub in Jakarta which targeted the police and an iconic, wifi-enabled coffee chain, was an eye-opener. Updates on the attacks swarmed individuals’ mobile notifications with amateur videos and photos capturing the explosions at the point of detonation.

The broadcast especially via the mobile virtual platform, inadvertently magnified the effect of the actual attacks, making the terror ever so much closer and relatable to anyone with mobile connection.

On Twitter, Indonesians immediately took on the hashtags #KamiTidakTakut (We Are Not Afraid) and #IndonesiaTidakTakut (Indonesia Is Not Afraid) online, which were inspired by President Joko Widodo’s statement urging his nation not to be afraid of the acts of terror. The move is similar to #PrayforParis, the driving narrative to express condemnation on the horrific killings in Paris which had left more than 130 dead and over 350 wounded.

The hashtags #KamiTidakTakut and #IndonesiaTidakTakut were intended as a form of social proof – a psychological reference that guides users to react to a tragedy or news according to the accepted norms. The unanticipated consequence was to give the perpetrators the attention they sought, eventually making the terrorist identity widely recognised, reputable and feared.

The use of hashtags as a form of offensive response may just be as damaging as the terror itself. In The Psychology of Terrorism Fears, Daniel Antonius and Samuel Justin Sinclair define ‘fear’ as the consequence and anticipation of future terrorism and this can have serious effects on a variety of domains including shaping personal beliefs and emotional responses.

Not too long ago, the hashtag #jesuisCharlie used to express solidarity for the victims of the Charlie Hebdo attacks in January 2015, had crystallised into an online hashtag battle between it and its counter-narrative #jesuisKouachi which was coined in support of the Kouachi brothers who were responsible for the massacre. #JesuisKouachi, as a form of retaliation to the more successful #jesuisCharlie hashtag, was tweeted by around five million people in support of the terror attack with over 25,000 tweets.

The aftermath of the November 2015 Paris attacks saw Facebook allowing its users to change their profile picture to the tri-colour French national flag filter as an expression of solidarity. There was even a Safety Check feature that let users who were directly affected by the incident to inform their family and friends of their own well-being.

As clarified by Alex Schultz, Facebook’s Vice President, the Safety Check feature was inspired by an early version of the utility used during the 2011 tsunami and nuclear disaster in Fukushima. The tool is supposed to be accessible to users “whenever and wherever” there are “serious and tragic incidents in the future”.

Unfortunately, these features were not made available in the case of the recent Jakarta attacks. The absence of these technological tools reflected some disparity on the social networking service that has become the go-to platform for nearly 63 million people in Indonesia, making the country the third-largest Facebook mobile phone audience in the world.

The deadly Beirut blasts on 12 November 2015 for which the self-styled Islamic State had claimed responsibility too suffered from this indifference and discrimination. Unlike Paris, Lebanon was regarded as a place with on-going crisis where attacks are common and hence the Safety Check feature is deemed somewhat irrelevant.

An online statement released by ISIS claiming responsibility for the Jakarta 2016 attacks can be seen as a form of celebration of this horror. Its intention was to assert itself as a serious military threat in the Southeast Asia region. The acknowledgement which came in the form of a simple Telegram update was enough to inspire independent pro-IS operatives to launch future attacks in the name of the organisation.

Bahrun Naim, the alleged mastermind behind the Jakarta attacks, wrote in his now deactivated personal blog, www.bahrunnaim.site on 18 January 2016, that the attacks were a form of retaliation against Detachment 88, the Indonesian counterterrorism unit responsible for hunting, criminalising and even killing ISIS-affiliated groups.

His blog posting was entitled, “Nasihat Untuk Penonton” (Advice for Spectators) which seems to be directed specifically towards those who have become spectators of the attacks, the witnesses of the unfolding drama, or perhaps those who have tweeted or shared haunting visuals to their respective social contacts. It is as if Naim was asking these ‘spectators’ to come out of their passive cell and become active participants by outwardly displaying their condemnation on the government and police.

A War That Concerns Everyone

Who would have thought that many, if not most, people in the virtual space have begun to associate themselves with the occurrence of a terror attack? From taking videos to changing one’s social media profile picture or crafting unique personalised hashtags, terrorism has penetrated through the digitised social fabric of their lives.

The Jakarta and Paris episodes have become a testimony to ISIS’ successful endeavour to bring the threat landscape beyond the physical realm and into the personal space of a self-conscious, attention seeking hashtag-driven generation. The actual act of terror performed by a group of zealots in the name of ISIS is more than just an attempt to inflict mass civilian casualties in distant territory outside Syria and Iraq. It has become a symbolic move to create a war that concerns everyone – even the spectators and the bystanders who are on mobile connectivity.

Remy Mahzam is an Associate Research Fellow at the International Centre for Political Violence & Terrorism Research (ICPVTR) from the S. Rajaratnam School of International Studies (RSIS), Nanyang Technological University (NTU), Singapore. He graduated from the Wee Kim Wee School of Communication and Information (WKWSCI) in NTU and pursued higher education at the International Islamic University Malaysia (IIUM) in the field of Islamic Revealed Knowledge and Human Sciences.