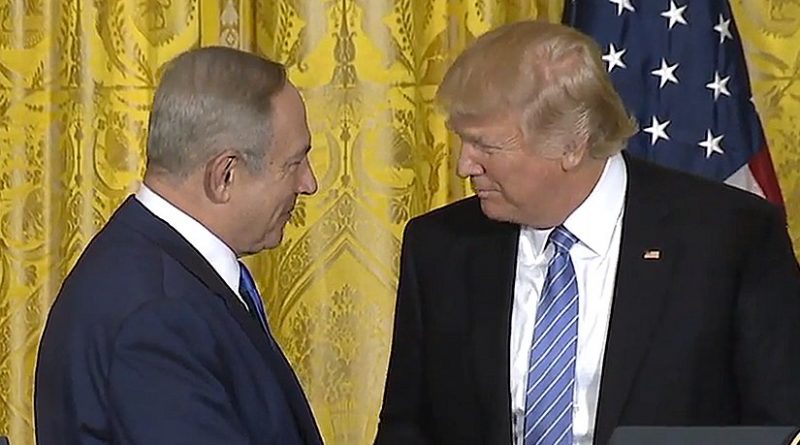 What Netanyahu and Trump have demonstrated during their press conference was that both seem to revel in illusions where they find a zone of real comfort, while leaving Israelis and Palestinians to an uncertain and ominous future.

President Trump remained true to his customary flip-flopping on just about every issue when he stated during a joint press conference with Prime Minister Netanyahu that he is “looking at two-state and one-state, and I like the one that both parties like… I can live with either one.” By stating so, Trump gave Netanyahu what he was hoping to get—a departure from the two-state solution. To achieve that, Trump is reportedly looking at other options that would enlist the Arab states—who presently share mutual strategic interests with Israel to form a united front against their common enemy, Iran—to help broker a solution to the Palestinian problem.

To be sure, the two leaders who are both in trouble—Netanyahu is under multiple criminal investigations for corruption, and Trump is being attacked from just about every corner for his outrageous statements, contradictions, and self-indulgence—found comfort with one another.

Netanyahu went back home feeling triumphant, as he seemingly managed to sway Trump from the idea of two states, while Trump presented himself as a statesman thinking out of the box by looking at an Israeli-Arab comprehensive peace through which to fashion a solution to the Palestinian conflict.

Although CIA Director Mike Pompeo met with Mahmoud Abbas the day before the press conference, I was told by a top Jordanian official in Amman that Abbas was abundantly clear during the meeting that there is not and will never be an alternative to a two-state solution based on the Arab Peace Initiative (API). Moreover, Abbas indicated that Hamas’s position on a two-state solution is unequivocal, and in any case, Gaza and the West Bank must constitute a single Palestinian state.

While Netanyahu often pretended that he still believes in the two-state solution, during the many encounters he had with former Secretary of State John Kerry (including a joint meeting with Egypt’s President Sisi and Jordan’s King Abdullah in Aqaba in 2016) where he was presented with a comprehensive peace plan, he repeatedly changed his position.

Netanyahu habitually claimed that his extremist right-wing partners oppose the creation of a Palestinian state under any circumstances and that his government would collapse if he were to actively pursue the idea, as if he could not form a new government with the left and center parties who are committed to a two-state solution. Nevertheless, he continued to sing the song of two states for public consumption and to get the Obama administration off his back.

Regardless of what new ideas Netanyahu and Trump concocted, one thing remains certain: there is simply no other realistic solution to the Israeli-Palestinian conflict other than two independent states, Jewish and Palestinian.

The viability of this solution does not only rest on preserving Israel as a democracy with a Jewish national identity while meeting the Palestinians’ aspiration for a state of their own. A careful scrutiny of other would-be alternatives floating around have no basis in reality.

Jordan is not and will never become a Palestinian state (as some Israelis advocate) because the Hashemite Kingdom will resist that with all its might; a binational state is a kiss of death to the Zionist dream; the establishment of a Palestinian state in Gaza while incorporating much of the West Bank into Israel is a non-starter; the creation of a federation between Israel, Jordan, and Palestine is a pipe dream; and finally, confining the Palestinians in the West Bank in cantons to run their internal affairs as they see fit, while Israel maintains security control, will be violently resisted by the Palestinians until the occupation comes to an end.

It is true that the Arab states view Israel today as a potential ally in the face of the Iranian threat, and there may well be a historic opportunity to solve the Israeli-Palestinian conflict in the context of a comprehensive Arab-Israeli peace. This opportunity, though, can be materialized only in the context of the API.

The central requirement of the API is a settlement to the Israeli-Palestinian conflict based on a two-state solution, which would subsequently lead to a regional peace. Indeed, only by Israel first embracing the API will the Arab states lend their support to a two-state solution by putting pressure on the Palestinians to make the necessary concessions to reach a peace accord.

Those who claim that the two-state solution has passed its time and new and creative ideas should be explored must know that many new ideas have been considered. None of them, however, could provide a solution that meets the Israelis’ or the Palestinians’ requirement for independent and democratic states enjoying Jewish and Palestinian national identities, respectively.

Netanyahu has found in Trump a co-conspirator. Both have a proven record of double talking, misleading, and often outright lying. Both are blinded by their hunger for power and are ready and willing to say anything to please their shortsighted constituencies. Neither has the vision or the courage to rise above the fray, and nothing they have uttered jointly meets the hardcore reality they choose to ignore.

What Netanyahu and Trump have demonstrated during their press conference was that both seem to revel in illusions where they find a zone of real comfort, while leaving Israelis and Palestinians to an uncertain and ominous future.