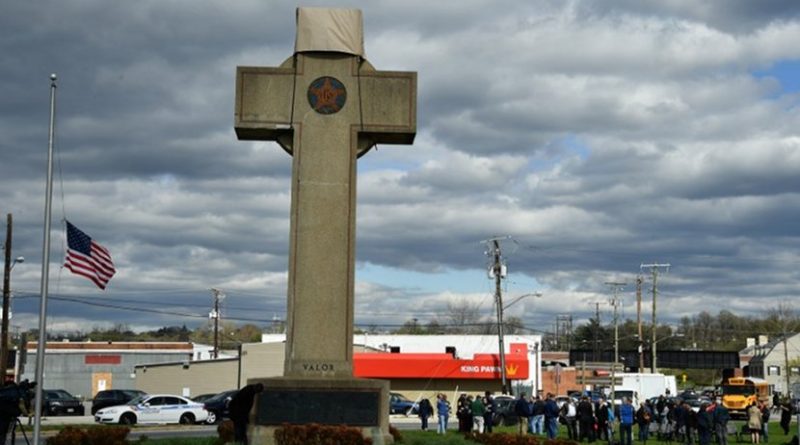 In 1919 the political landscape of Europe had been drastically rearranged, the United States had emerged from relative isolation onto the world scene, and the western world was in shock at the unprecedented scale of the carnage that the Great War had left in its wake.  Amid the victory celebrations in the United States, a group of mothers in Prince George’s County, Maryland, organized a community effort to erect a memorial to nearly 50 county residents, their sons included, who had lost their lives fighting in Europe.  The memorial was completed in the early 1920s and is today known as the Peace Cross in Bladensburg.

For nearly 50 years government action has been filtered through what is known as the Lemon test, first articulated by the Supreme Court in the 1971 decision in Lemon v. Kurtzman.  The three-pronged test requires that, in order to pass constitutional muster and not constitute the establishment of religion, a state action must be (1) secular in purpose, (2) neutral toward religion in effect, and (3) avoid “excessive government entanglement with religion.”  As it has evolved this test has focused on the question of whether a government action is tantamount to endorsement.  Counsel for the American Legion at First Liberty Institute are advancing the argument that judicial scrutiny should be centered on whether government action involves some sort of coercion of non-believers into belief or practice.  Such a shift in the analysis of the establishment clause would harmonize it with the other clauses of the First Amendment as well as create much clearer guidance for other courts in subsequent cases.

This case presents an interesting set of circumstances in that while the memorial presently stands on public property, this has not always been true.  The memorial was erected on what was then private land owned by the American Legion with funds raised privately.  Due to its proximity to what has become a major thoroughfare as the suburbs surrounding Washington have grown, the Maryland legislature made provision for a state agency to receive the property.  The conveyance process, begun in 1935, was completed in 1961, and today the memorial and the grounds surrounding it are entirely owned and maintained by the Maryland National Capital Park and Planning Commission.

This significant wrinkle brings to the fore the interconnectedness of religious and economic liberty.  One hundred years ago a group of private citizens raised private funds to erect a cross-shaped monument on private property.  Presumably this action was then and would be today constitutionally permissible.  The mere change in ownership of the once privately held property is what has imperiled the cross even though the conveyance of ownership was completed in service of a public good (i.e., traffic safety).  If the Court rejects the claims of the American Legion and rules that the memorial violates the establishment clause, a new pathway to the exclusion of religion and religious symbols from public life will emerge.

A church building or other structure dedicated to religious practice that changes hands from one private entity to another – and is converted for secular uses — is almost certainly going to be stripped of religious symbols. But this is to be expected because such a conveyance most likely changes the use of the structure and such symbols would no longer be appropriate.  Conveyance to a governmental agency, however, would change the calculus.  In some cases, the conveyors of the property may intend to discontinue the religious purpose or meaning, and the government agency’s re-purposing of the property would naturally involve removing religious symbols. But in cases involving memorials like the Peace Cross, where there is no intention to transform the purpose of the property, such symbols would only be as safe as the property rights of their owners.

Security connected to property rights should be very firm, given several constitutional provisions that protect them.  But the Constitution does grant the state the power to take private property for “public use” and only in exchange for “just compensation.”  This is known as the power of eminent domain.  The Peace Cross case does not involve the exercise of this power, but it is not difficult to envisage a case that might.  The power of eminent domain was drastically expanded when the meaning of “public use” was expansively defined by the Court in the 2005 decision in Kelo v. City of New London.

In the event that the Court rules against the American Legion in these cases it is not difficult to imagine the pathway that would allow a governmental authority to rid a community of religious symbols. A hostile government has the tools to take property under Kelo and then, under an adverse ruling in this case, the entity would have no choice except to remove the offending symbols.  While religious freedom is the first freedom — the foundational freedom that allows citizens to orient all of life in a direction aligned with their religious beliefs or lack thereof — economic freedom is inextricably intertwined with it.

Secure property rights allow all citizens to erect memorials, start businesses, and build homes without fear of undue external interference.  Property rights furnish the concrete apparatus that allows civil society, including churches and religious organizations, to form and to thrive.  Without property rights, neither economic nor religious freedom can be safe. While the Court will likely never consider or mention property rights in this case, a decision against the American Legion that would force the memorial down could imperil much more than the Bladensburg Peace Cross.

*About the author: Trey Dimsdale, J.D. is the director of program outreach at the Acton Institute. He holds degrees in law, theology, and ethics and has worked as an attorney, educator, non-profit administrator, and pastor. He is the co-editor of Work in Christian Perspective (SCM, 2018) and an editor of a forthcoming volume on Christianity and populism. He has spoken around the world on issues as diverse as housing policy, philosophy of law, and religious freedom. He served as a clerk for state and federal trial judges as well as a state appellate judge, and is an active member of the[email protected]

Home » A Legal Test For The Bladensburg Peace Cross – OpEd