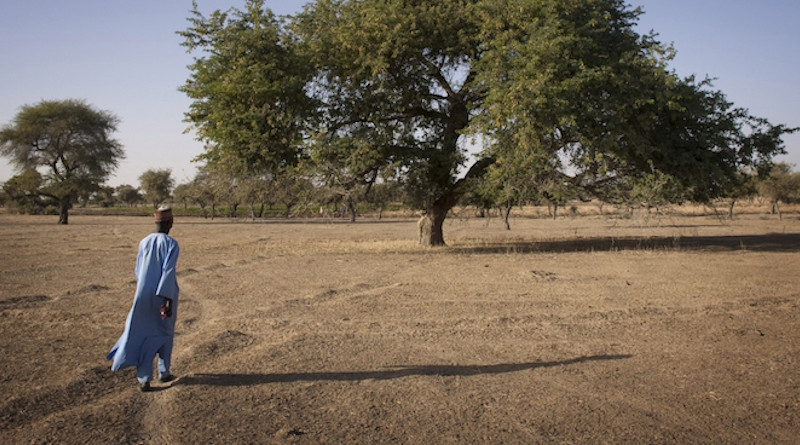 An area that used to be on the edge of Lake Chad. The drying lake has exacerbated suffering for millions. Credit: Africa Renewal.

Twenty-year-old Phoebe Musa remembers the day Boko Haram militants stormed her village of Gwoza in Borno State, northeast Nigeria, five years ago. They came in on horseback, motorbikes and screeching military vehicles and attacked everyone in sight. Amid bursts of gunshots, they set fire to dozens of homesteads.

The fighters then abducted Ms. Musa from her home, blindfolded her and dragged her deep into the nearby Sambisa forest, where she remained until she was rescued by Nigerian troops earlier this year.

“I was forcibly married to three terrorists at separate times that resulted in three children,” Ms. Musa told Africa Renewal during an interview at the Durumi camp for internally displaced persons (IDPs) in Nigeria’s capital, Abuja. With her lastborn child strapped on her back, she explained that her two older children had died of starvation in the bush.

Ms. Musa’s predicament represents the face of the worsening humanitarian situation in the Lake Chad Basin. About 10 million people living there are in need of humanitarian assistance, according to the UN High Commissioner for Refugees (UNHCR). The UN agency says that thousands of IDPs being sheltered in various camps in the region lack adequate accommodation, food, water and sanitation.

That Lake Chad, once one of Africa’s largest freshwater bodies and a source of livelihood for about 30 million, is vanishing fast is no longer breaking news. What is new is the unique and complex humanitarian crisis around the basin, which is among the most severe in the world.

The widespread violence has left 10.7 million people across the Lake Chad region in need of emergency assistance. Most of these people were already contending with high poverty rates, poor provision of basic services like education and healthcare, and the devastating impact of climate change.

Now 2.3 million people across the region are displaced; over 5 million are struggling to access enough food to survive; and half a million children are suffering from severe acute malnutrition,” said UN Deputy Secretary-General Amina Mohammed during a high-level event on the humanitarian situation in the region.

The water body has diminished by 90% since the 1960s due to overuse and climate change effects. Conflict between herders and farmers became common as livelihoods were lost. Families who relied on the lake started migrating to other areas in search of water.

Second, the governments want to end the violent conflict between herders and farmers over water and pasture.

Third, they are trying to find a lasting solution to the drying of the lake, which is exacerbating poverty in the region. An ambitious plan to restore the lake to its former glory involves a multibillion-dollar project that will channel water from the Ubangi River in the Democratic Republic of the Congo, which is 2,400 km from the lake. A feasibility was already underway in 2018.

The lake’s replenishment effort is being led by Nigeria’s president, Muhammadu Buhari, and supported by the eight countries that are members of the Lake Chad Basin Commission, the regional regulatory body of the basin’s water (Cameroon, Chad, Niger, Nigeria, Algeria, the Central African Republic, Libya, and Sudan).

President Buhari raised an alarm over the disappearing lake at an event in New York on the margins of the UN General Assembly in September 2019.

“Lake Chad is shrinking while the population is exploding. It’s a challenging situation. With less land, less rainfall, these are very unique problems for the country,” said President Buhari.

The United Nations’ engagement in the Lake Chad Basin has taken the form of humanitarian assistance, development aid, human rights, justice and law enforcement, as well as preventing and countering terrorism, according to Deputy Secretary-General Mohammed.

In the last two years, the UN has co-hosted two back-to-back international donor conferences, the first in Oslo where donors pledged $672 million in emergency assistance, and the second in Berlin, where donors announced $2.17 billion, including $467 million in concessional loans, to support activities in Cameroon, Chad, Niger and Nigeria.

Nigeria’s National Commission for Refugees, Migrants and Internally Displaced Persons, the lead agency charged with the welfare of IDPs, maintains that IDPs’ durable options are to return home or be settled in host communities.

Governments need to integrate the IDPs and refugees into mainstream society by “empowering them to start some business or farming so that they can take care of their families,” Daniel Soetan, national coordinator of Goodwill Ambassadors of Nigeria, an NGO involved in distributing relief materials to IDPs, told Africa Renewal.