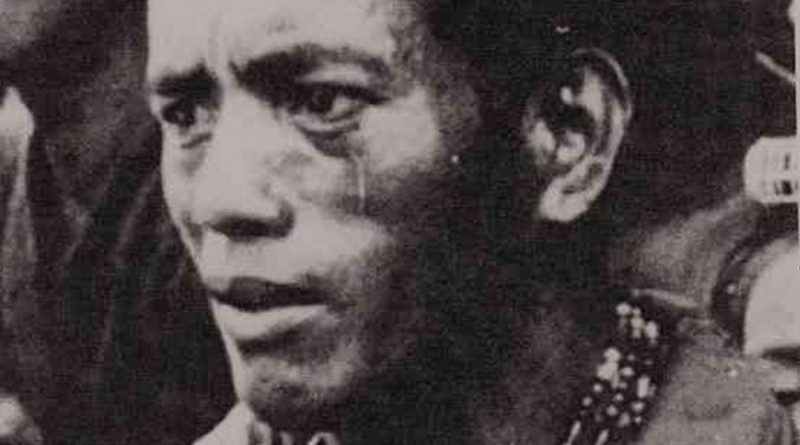 If the land could speak, it would speak for us. It would say, like us, the years have forged the bond of life that ties us together. It was our labor that made the land she is.

“It was her yielding that gave us life. We and the land are one! But who would listen? Will they listen? Those invisible ones, who, from unfeeling distance, claim the land is theirs because pieces of paper say so? The pieces of paper are backed by men who speak threatening words. Men who have the power to shoot and kill. Men who have the power to take our men and our sons away? If the land could speak, it would speak for us. For the land is us. We will not move away from our lands!”

Exactly 28 years ago, Macli-ing Dulag, a lowly highway labourer from the Igorot indigenous tribe of the Philippines spoke those words which today prod indigenous people to rise against dams, mines, and landgrabbing — and he was murdered for speaking out.

Dulag’s death was planned from the very beginning when he championed the rights of the Kalinga and Bontoc indigenous peoples against the Chico dam. A pet project of then dictator Ferdinand Marcos with $US120 million ($163 million) funding from the World Bank, the proposed Chico dam was envisioned to provide nearly 200 megawatts of hydroelectric power. It will irrigate about 65,000 hectares and keep industries and manufacturing companies in Manila running.

On the other hand, it would submerge three towns of Mountain Province and five in Kalinga. Nearly 100,000 hectares of ancestral lands, rice fields, farms, forests, hunting grounds, water sources, natural orchards, burial grounds and pasture lands would be submerged and lost forever. Some 250,000 Bontocs and Kalingas will be directly relocated and affected.

Macliing, as a tribal leader, opposed the dam project as early as 1974. A year before his death, he organised a “budong” (peace meeting) which drew nearly 4,000 from Kalinga and Mountain Province. The participants vowed to resist the dam and to die fighting against it. On that day, Dulag became a marked man.

Lt Leodegario Adalem was the leader of the killers. Some of the politicians, technocrats and high ranking military men behind Dulag’s death are still alive.

Dulag’s death galvanised a stronger resistance not only against the dam, but the Marcos regime as well. It sparked self-determination and the ancient courage of the indigenous Igorots. Men, women and children, young and old alike took allegiance to stop the dam themselves at all costs.

Before Dulag died, he said “In your search for the good life, at the same time destroy life, we question it. The need for electric power is no reason for our deaths. The building of the dam will be the destruction of the environment which our life depends upon. When that happens, there will be no tears to shed. Just tears of blood”.

Bold words of truism, backed by his very own life, continue to ring aloud among indigenous peoples today in their unending fight for justice, human rights and equality.

The fight is not only for land now but for life itself as land is synonymous to life. Now that Declaration of Rights of Indigenous Peoples by the United Nations has been ratified, it remains to be seen if there will be changes for the better.

While Article 7 section 5 of the Philippine Constitution states that the government shall “protect the rights of the indigenous cultural communities and their ancestral rights” in reality, the welfare of the indigenous peoples are never in the heart of state policies when it comes to development.

The latest government move to disassociate Cordillerans from their lands is the 1995 Mining Act or Republic Act 7942. The law allows transnational companies to operate mining areas in ancestral domains and lands. Most onerous under the Act are the Financial and Technical Assistance Agreements (FTAA) and Mineral production Sharing Agreement (MPSA).

Under FTAA, foreign mining companies can invest in local mining industry for a minimum area of 81,000 hectares of mineral land for a period of 50 years.

The government is intent to embrace globalisation policies in an effort to keep in pace economically with its richer neighbours. In doing so, it is nurturing globalisation agreements dubbed by environmentalists as “pacts with the devil”.

As Dulag is remembered this day, some in the Philippines have forgotten or are ignorant of his symbolism, especially the young. But many still continue to be inspired by him, including indigenous peoples in other countries.