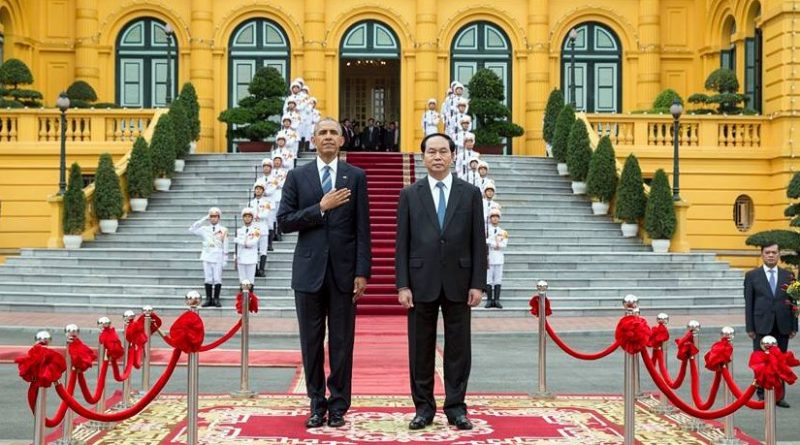 US President Barack Obama and Vietnam's President Tran Dai Quang listen to the U.S. national anthem during the arrival ceremony at the Presidential Palace in Hanoi, Vietnam, May 23, 2016. (Official White House Photo by Pete Souza)

As the U.S. lifted its decades-long arms embargo with Vietnam during President Barack Obama’s visit there, human rights advocates argued that the country had not sufficiently improved its human rights record to warrant the deal.

After the U.S. had pressured Vietnam “for years” to improve its “human rights record,” he continued, it had not responded in kind. “It has not repealed any repressive laws, nor released any significant number of political prisoners, nor made any substantial pledges,” he said.

Weeks in advance of President Obama’s visit to Vietnam, human rights advocates were insisting that the U.S. make any deal with the country contingent upon human rights concessions. Rep. Chris Smith (R-N.J.) asked that the trip not even be made unless the Vietnamese government released religious prisoners. There should be no agreement struck “until there is significant, verifiable, and irreversible improvements in human rights in Vietnam,” he said.

At a joint press conference on Monday, President Obama said the lifting of the embargo stemmed from “a lengthy process of moving towards normalization with Vietnam.”

Human rights, he continued, were “not directly tied” to the lifting of the embargo, and he admitted that “this is an area where we still have differences.” Vietnam’s President Quang said, through an interpreter, that “the consistent position and viewpoint of the Vietnamese state and government is to protect and promote human rights.”

The White House has said that it is pushing Vietnam to improve its record. “During the April 25-26 annual U.S.-Vietnam Human Rights Dialogue, the United States called on Vietnam to release all prisoners of conscience and cease harassment of individuals exercising their fundamental freedoms, including those relating to expression, assembly, and religion,” the White House said Monday.

Yet human rights advocates say that words have not been supported by actions from the administration.

Shortly before the president’s visit, the government released a Catholic priest and well-known religious prisoner, Fr. Nguyen Van Ly, two months away from the end of his sentence. However, “the Vietnamese government has insulted the president by detaining or harassing dissidents yesterday and today,” Sifton said Monday.

And overall, the human rights situation in Vietnam remains “dire,” Human Rights Watch reports, because the Communist government “maintains a monopoly on political power” and the state is responsible for widespread human rights abuses like torture, seizing of private property “without adequate compensation,” and the jailing of human rights and democracy activists.

As for religious freedom in the country, the overall situation is “nuanced and complex,” the U.S. Commission on International Religious Freedom noted in its 2016 annual report, and because of the government’s maltreatment of certain religious groups, the commission has recommended it as a “country of particular concern” since 2001.

That term is an official State Department designation given to countries “the government of which has engaged in or tolerated systematic, ongoing and egregious violations of religious freedom.”

Vietnam meets this criteria because government harassment, imprisonment, and physical abuse of members of certain religions has continued for years and has not stopped, the report explained.

There have been reports of Catholic schools being threatened with destruction by authorities, and “Catholics, including nuns” have been attacked in the Gia Lai province. Other Christian pastors or priests have been imprisoned, attacked, or threatened by the government; some activists were attacked even after they were released from prison.

Vietnam reportedly has between 100 to 150 “prisoners of conscience” detained for their religious beliefs.

The wife of an imprisoned Christian human rights lawyer, Vu Minh Khanh, testified before the House Subcommittee on Africa, Global Health, Global Human Rights, and International Organizations on May 10. In her written testimony, she said her husband was arrested in 2007 for “conducting propaganda against the state.”

After his prison sentence – four years in prison and four more years in house arrest – he was taken again by authorities in December and faces anywhere from 3 to 20 years in prison, she said.

“My husband has been detained for almost 5 months now, yet I have not received any information about him,” she stated, noting he has no access to lawyers or family. She added that “if in fact my husband has been tortured physically and/or mentally, or even given false information, I would not know.”

Now that the arms deal is in place, the U.S. must work with it “to create incentives for Vietnam to improve its human rights record,” Sifton stressed in his statement.

“President Obama and the US Congress will need to tell Hanoi clearly that specific arms sales will be restricted if the government doesn’t start releasing political prisoners, repealing the laws that are used to prosecute them, and easing up on harassment and restrictions on dissidents and journalists.”

Home » Was It A Mistake To Lift Arms Embargo Against Vietnam?