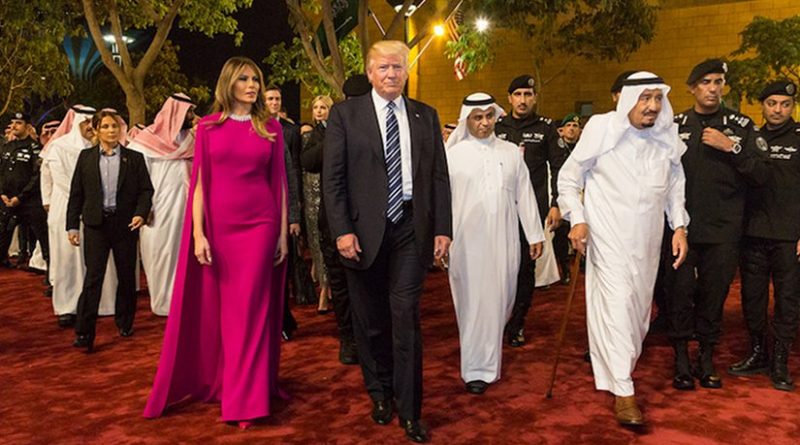 Donald Trump is the antithesis of leadership. Walking into the cauldron of the Middle East and denouncing Iran when it had just – almost at the same moment – re-elected as president a man who presided over the deal that de-fanged his country’s nuclear program and whose support is badly needed in fashioning an end to the Syrian war, stabilising Iraq and beheading ISIS was a show of how not to make friends and win people over.

In Saudi Arabia he seemed to act as if enormous amounts of military hardware would be enough to convince its leadership that he was a changed man – as a presidential candidate he had said many harsh words about the country. I doubt if the Saudi Arabians were so quickly convinced that he is a sophisticated leader capable of untangling the criss-crossing of alliances and interests that bedevil parts of the Middle East. The lack of loud applause when he gave his “big” speech tells it all.

What is leadership? First having a blueprint of what one wants to achieve, and that is more than 100+ days in the making. It’s no use trying to say nice things after one is elected. Observers, searching to find the personality and inner convictions of a man who confronts them as the president of the United States, look at the record. After all, for them the stakes are high, and much hangs in the balance. The day after a big speech or a flying visit the question is, is he more than a guy who can knock the heads together of a municipality to be allowed to buy land to build a golf course or new hotel?

We need from the president of one of the world’s superpowers that he knows how to give tangible leadership and perceptive, well-informed, well-thought out and perceptive direction to those many strands of change now afoot.

We need a leadership in every country that knows how to transcend mankind’s divisions, to diminish our most primitive instincts and to enhance our nobler ones. It must have the power of personality that inspires the best of us and takes us onward and beyond what we do so often unsatisfactorily and insufficiently to what we could do if human energies were liberated form the confines of too simple and narrow a perspective. We need to move beyond religion, country, race, language and life-style to what Martin Luther King called the beloved community. “We seek only,” he said, “to make possible a world where men and women can live as brothers and sisters.”

Leadership, we know, is an intangible quality that can only be described as it is observed. But we can list some of the ingredients it needs if it is to have any chance of working in today’s world. It must believe that the application of force is the signature of defeat and that true peace comes from careful compromise where no-one is asked to debase themselves before their opponent. It must be inspirational and take us into the reaches of our best performance, even enabling us to move far beyond what we have achieved before. It must be practical and down to earth, sifting the essentials and concentrating on what really are the priorities of living. It must be moral, selfless and yet convinced of its own purpose and audacity. In the end it must be immensely courageous, for the problems it faces can appear at times quite daunting and overwhelming.

We inhabit a precious but vulnerable planet. We can make the best of it or the worst. We can live by law, respect and a sense of community or we can pull apart from both each other and the habitat of which we partake and live in division and disunity, all the time diminishing the quality and expectation of daily life.

Donald Trump is not a cut of this block. I’m sure if he read what I’ve just written he would pour scorn on it and tell me that I should scrub my memory of what he said when he was a candidate. Indeed he would add that I’d quoted him all wrong and obscured his real thoughts.

If I were Saudi, Israeli, Palestinian, or even the Pope, I wouldn’t take anything at face value. He will use his charm, his speech-writers’ talents, his pretty daughter and beautiful wife to attempt to bowl over the opposition.

Will it work? I don’t think so. He thinks if he smiles a Trumpian smile, signs an executive order or sends off a Tweet, he has done something inspirational. In fact he may have just pulled the rug from under the worthy and the needy.  But this man has little empathy for those on the other side of the fence, whether they be the poor back home or the alienated abroad. The man does not know leadership. [IDN-INPS – 23 May 2017]

*Note: For 17 years Jonathan Power was a foreign affairs columnist for the International Herald Tribune. He has forwarded this and his previous Viewpoints for publication in IDN-INPS. Copyright: Jonathan Power.