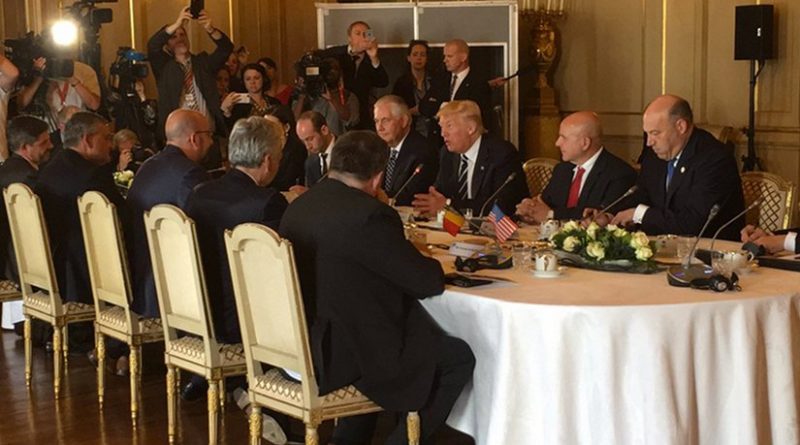 US President Trump in Brussels. Photo Credit: Department of State and US Embassy Brussels

(RFE/RL) — U.S. President Donald Trump has arrived in Brussels ahead of a NATO summit where he will push the security alliance’s 28 members to meet their spending obligations and do more to combat terrorism amid a backdrop of the bombing in Britain that killed 22 people.

The fight against terrorism will be top of the agenda at the May 25 meeting in the Belgian capital, a stop on Trump’s first trip abroad since he took office in January.

U.S. Secretary of State Rex Tillerson told reporters aboard Air Force One as it flew toward Brussels that the president wanted NATO members “to step up and fully meet their obligations” of spending 2 percent of gross domestic product on defense.

“I think you can expect the president to be very tough on them, saying: ‘Look, the U.S. is spending 4 percent. We’re doing a lot. The American people are doing a lot for your security for our joint security. You need to make sure you’re doing your share for your own security as well,'” Tillerson said.

“So I think that’s going to be the core of his message to NATO,” he added.

Trump called NATO “obsolete” during the U.S. presidential campaign last year, saying it was not doing enough to fight terrorism. He has also chided some members for not following NATO guidelines on spending.

He has since softened his criticism, and Tillerson said the United States would like to see NATO become more engaged in the global coalition by becoming a full member of the 68-country U.S.-led group whose goal is to defeat the Islamic State (IS) extremist group.

Ahead of Trump’s arrival in Brussels, NATO Secretary-General said the “brutal” bombing in Manchester on May 22 showed that the alliance must agree at the meeting to do more to combat terrorism.

“I expect NATO allies to step up and agree to do more in the fight against terrorism, not least because of the attack we saw in Manchester,” Stoltenberg told a news conference on May 24.

IS claimed responsibility for the attack, in which a suspected suicide bomber set off explosives as concertgoers were leaving Manchester Arena after watching American pop singer Ariana Grande perform.

The blast killed 22 people and injured about 60 others. Many of the victims were children, including an 8-year-old girl who was among the dead.

Stoltenberg said the “brutal attack” showed that the threat of terrorism remained ever present.

“We are still discussing whether NATO should become a full member of the global coalition,” Stoltenberg said, referring to a 68-member U.S.-led coalition whose goal is to defeat IS.

However, diplomats from NATO members, speaking on condition of anonymity, told RFE/RL the alliance was expected to decide to join the coalition — which is fighting IS militants in Iraq and Syria — on May 25.

Twenty-three of the global coalition’s 68 partners have over 9,000 troops in Iraq and Syria in support of the effort to defeat the IS group, while its air assets have conducted more than 19,000 strikes on IS targets.

All 28 allies have joined the coalition as individual countries, but Stoltenberg said that if NATO became a member, it would significantly boost coordination in the war against IS in Syria and Iraq.

It would also send “a strong message of unity…and especially in light of the attack in Manchester, I think it is important to send this message of unity against terrorism,” Stoltenberg said.

“Many allies would like to see NATO as a full member of the coalition,” he said.

NATO currently provides AWACS surveillance planes to help anti-IS operations and trains officers in Iraq, but it stresses that these are and should remain noncombat roles.

“I expect we will agree to expand our AWACS support for the coalition,” Stoltenberg said.

While the attacks in Manchester will be on the minds of many attending the NATO meeting, Russia and how to engage it will be lurking right behind, according to James Appathurai, NATO deputy assistant secretary-general for political affairs.

“I think the general feeling is that we have a pretty good balance, to have a strong position of deterrence and defense, to engage with Russia or try to on the basis of strengths, and also to help the other countries in Europe to preserve their political independence and territory integrity,” Appathurai told RFE/RL in an interview on May 24. “Ukraine and Georgia being obvious examples, and I think that’s why Ukraine will come up.”

Home » Trump In Brussels To Push NATO On Spending