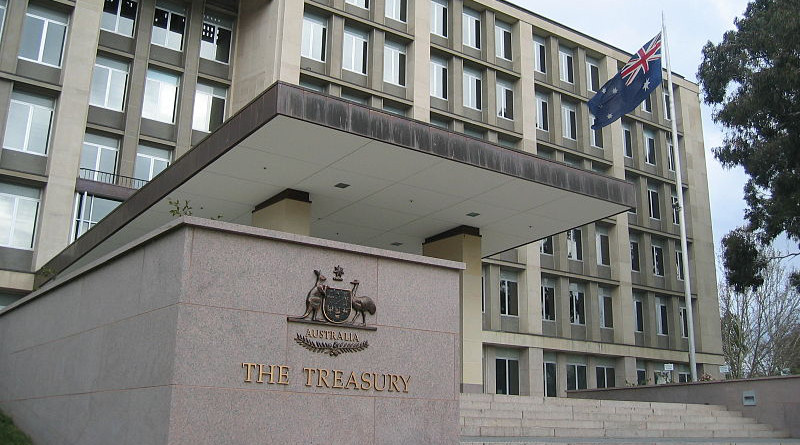 The main office of Australia's Department of the Treasury. Photo Credit: Wikimedia Commons

Hell has, in its raging fires, ringside seats for those who like their spreadsheets.  The seating, already peopled by those from human resources, white collar criminals and accountants, becomes toastier for those who make errors with those spreadsheets.  Even in their self-celebrated expertise, blunders will happen.

Few errors are as magisterial as that of the Australian government’s on JobKeeper.  In funding its job preservation scheme to cushion the shock of losses occasioned by the coronavirus pandemic, a miscalculation on the number of employees who should have been covered was revealed.  The initial coverage was ambitious: 6.5 million employees.  Treasury and the Australian Tax Office have now revised the figure, effectively halving it.  The “reporting error” occurred with respect to 1,000 business applications, a drop-in-the-ocean of 910,000 businesses who had put their names to the scheme.  A mind boggling $130 billion has been shaved and will now cost $70 billion.  Any comparisons on generosity – for instance, with the United Kingdom’s Coronavirus Job Retention Scheme – were invalidated.

Not that the scheme was that generous to begin with.  Anthony Forsyth, a sharply taloned legal eagle, teased out a few compromising details when the scheme was announced.  “Australia’s payment is 70% of the median wage.  The government’s claim that employees in retail and hospitality will get the median wage in those industries simply reinforces their low-paid status to begin with.”  Numerous other groups were also sidestepped with callous budgetary acumen.  Casual workers unable to show a period of employment of a year were simply ignored.  This knocked out the university sector, one increasingly rapacious in the way it uses such labour.  Ditto migrant workers or those on certain visas, the bread and butter recruitment for many small businesses.

The problem with such cockups is the opportunity they present.  More money to spend, surely a good bit of news.  But what on?  Those purposely excluded from the program might well be included now.  The original purpose of the initiative might be reiterated.  This is certainly the position taken by various state governments, including Tasmania’s Liberal Premier, Peter Gutwein, and the Labor Chief Minister of the Northern Territory, Michael Gunner.  According to Gunner, “if we can keep JobKeeper for longer, we should.  Industries like tourism and hospitality have been hit hard, so if it needs to be targeted, let’s make sure we look after them.”

The misers in treasury will obviously wish it to be kept in the coffers, sugar coating the message that things are not as dire as all that.  No need to spend that much; besides, all of this represents a glorious saving.  As the ABC put it, “The JobKeeper bungle now means the Federal Government is essentially $60 billion richer, which is good news for the budget’s bottom line.”  This is all well and good for handbag economics, which focuses on the fiction that government expenditure somehow resembles the old housewife’s weekly expenses.  In a sophisticated world of Keynesian stimulus and necessarily invigorating injections to lift expectations, retaining such money is a sin.  But it is a sin the Morrison government is keen on committing.

Instead of seeking scalps and culprits to crucify, the optimists abound.  The savings will, according to Danielle Wood from the Grattan Institute, “mean the deficit is probably a bit smaller than we expected it to be.”  Assistant Treasurer Michael Sukkar was enthused by a chance to give incompetence a distracting gloss. “In the end, what it means is our country is less indebted than it otherwise would be.  This is all borrowed money; there’s not a pot of money that we have sitting aside waiting to be spent on programs like this.”  His superior, Josh Frydenberg, celebrated the “welcome news that the impact on the public purse from the program will not be as great as initially estimated.”

Frydenberg has shown little interest in seeking a reallocation.  There were no villains in the affair, no one set for the chopping block.  “This is a very uncertain time.  I’m not blaming Treasury’ I’m not blaming the ATO.  No underpayments were made, no overpayments were made.”  Such statements merely underline the manic myopia that governs decision making, even during the most debilitating of crises.

Pop the corks, people, though Warren Hogan, formerly of the Treasury, is not convinced that any champagne be taken off the ice.  “There isn’t a sporting analogy for how big a miss this was.”  That size intrigued Federal Labor leader Anthony Albanese, who took to the cosmos for his comparisons.  “This is a mistake you could have seen from space.”

Opposition Senate leader Penny Wong is also scouring the record for answers.  Her main target of interest: Treasurer Frydenberg, who had not, as yet “fronted up and taken responsibility”.  The Senate Committee into the COVID-19 response will, in due course, press the treasurer for some explanation, but he is bound to be in the pink, excited that he has more cash to play with.

Such are the times that incompetence over such matters, however monumental, will not lead to sackings, demotions or any measure of retribution.  The flames of hell are yet to come; in the meantime, there is a resounding cheer coming from the Treasury.  All that cash, and no initiative to spend it.  Things are really looking up.