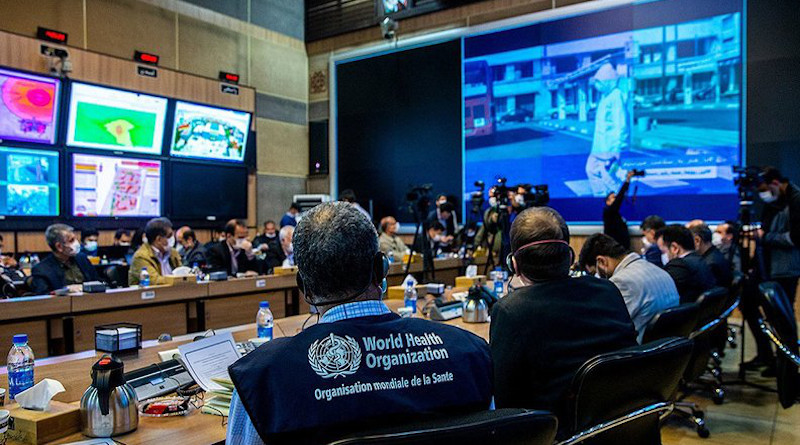 World leaders want to get past the blame game and press the urgency of cooperation. They also want to focus on lessons that can be learned to improve pandemic response to better handle the next one. This was evident in the opening event of the 73rd World Health Assembly last May 18 where member states unanimously adopted a resolution calling for an independent inquiry on the global response to COVID-19. Instead of assigning blame, the evaluation aims to identify lapses and strengthen international response.

The consensus was unsurprising. The same sentiment echoes the prevailing view of most G7 and G20 leaders in similar virtual summits held last March. Countries want the global health agenda to be spared from great power politics. In fact, U.S. efforts to label the pandemic the “Wuhan virus” led to the failure to issue a joint statement in the G7 meeting chaired by Washington. But while China and the World Health Organization (WHO) are not yet out of the woods and their standing seriously blemished, support for the global health body remains strong and China’s medical outreach is being recognized.

Due to their role in global trade and travel, any crisis that would emanate from either U.S. or China will have severe and far-reaching consequences for the world. This was manifested in the 2008 financial crisis and the 2009 H1N1 flu. We are seeing it again in the present novel coronavirus pandemic and the economic recession it will leave in its wake. If the U.S. was able to weather two successive calamities and regain global confidence, China thinks it can too.

However, COVID-19 takes place at a time of heightened great power rivalry. Trade tensions were already rife even before the onset of the pandemic. Chinese technology advances, notably Huawei’s 5G, are coming under intense American suspicion and global calls for boycott. The high infection rate and death toll from COVID-19 and the economic havoc brought about by the lockdowns will only exacerbate this animosity in the lead-up to the U.S. presidential elections in November. Decoupling and disruption of global supply chains are likely to accelerate post-pandemic. Thus, unlike the 2008 financial crisis and the 2009 H1N1 pandemic, rancor, conspiracy theories, and demands to hold China to account for its initial mishandling of the outbreak surfaced.

While the immutability of sovereign immunity will likely remain firm, COVID-19 will raise the bar for transparency and state responsibility in dealing with outbreaks of new diseases hitherto unknown to science. This is especially so for capacitated states. A higher threshold of state accountability may also open a Pandora’s box. This may expose not only the pandemic’s country of origin, but also countries which failed to undertake appropriate measures despite early alerts, expert assessments, and other telltale signs.

Hopefully, the pandemic will also translate to greater support for improving public health system in less able states. To this, pledges made during the World Health Assembly meeting were encouraging. President Xi Jinping, for one, underscored the need for greater support for Africa. Besides medical equipment, Beijing also dispatched five expeditionary medical teams to augment the 46 Chinese resident medical teams already in the continent to aid in the fight against the pandemic. He also announced the establishment of a cooperation mechanism for Chinese hospitals to pair up with 30 African counterparts and promised to fast track the construction of the Africa CDC headquarters. Beijing also earmarked $2 billion for over two years to support COVID response and socio-economic development, especially for developing countries. Department of Health and Human Services Secretary Alex Azar II, on the other hand, said that theU.S. will allocate over $9 billion for the global COVID-19 response. This includes more than half a billion dollars for planned health investments targeting over 40 of the most at-risk countries. The U.S. and China once cooperated in containing the Ebola outbreak in West Africa in 2014. Such cooperation is sorely missed but may not be in the immediate horizon despite overwhelming desire for it.

Concerns about zoonotic transmission may also enhance global efforts to clamp down on the illicit wildlife trade. While bush meat is traditionally consumed in many parts of Asia, Africa and beyond, COVID-19 may demand improved sanitation and better regulation of markets selling exotic farm-raised game. As a huge market for such commodity, much will be expected of China. COVID-19 should also challenge the marginal resources and erratic attention given by most governments to pandemic risk assessment and response.

Because of their brewing mutual antipathy, U.S. attempts to bring China to account will always be colored. The ability to resist pressure from either Washington or Beijing will weigh heavily on other powers overseeing an impartial probe. For Australia to initially call for such an investigation is a gallant move. For it to be threatened of economic backlash speaks of how Beijing sees its security alliance with the U.S. and its Quad membership as making it a biased advocate, a view not necessarily shared by other countries. For the European Union to sustain Canberra’s initiative and eventually garner global support, including from China, shows the bloc’s perceived ability to hold its ground. Whether its diverse membership can play to its strength in an increasingly polarized environment remains to be seen.

China’s hypersensitivity to any insinuation of responsibility and America’s reproach of China’s initial handling of the epidemic and its influence over WHO will continue to cast a long shadow in any effort to get to the bottom of COVID-19. The clash of narratives will continue to play out. Against this context, insulating global health agenda from great power game will be tough.

This article was published at analyzingwar.com