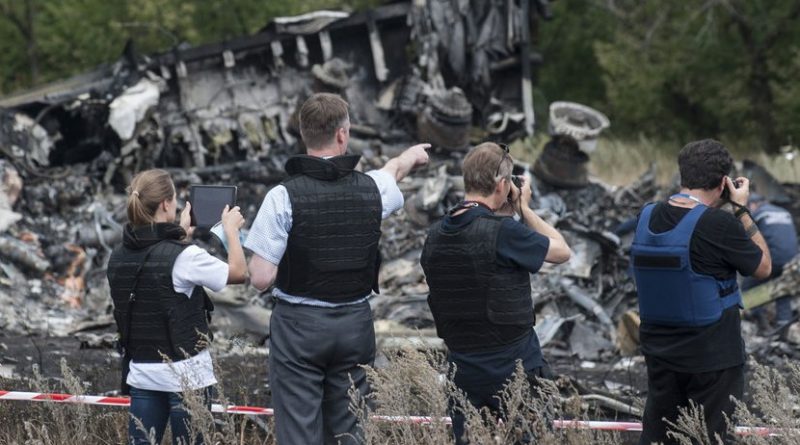 International justice has received another setback. At blame is a Dutch prosecutor who just brought unsupported murder charges in the tragic 2014 MH17 airplane disaster. The impact of his puzzling actions is to sabotage any immediate hopes of shedding light on what led to that international tragedy.

It was five years ago that the Amsterdam to Kuala Lumpur flight traversing Ukraine’s war zone was attacked. All 298 people aboard were killed.

Responsibility for the MH17 attack, like that for the raging border war in Ukraine, has been a hotly contested political issue. Now it looks like politics are trumping justice in the search for the truth.

From the start, before significant investigative evidence was collected, two opposite sides of the story emerged. From the US-NATO side came instant allegations of Russian involvement. A full day hadn’t passed before then-President Barack Obama issued an innuendo-laced statement blaming Russia. Sometime later when Russian president Vladimir Putin reacted by denying those allegations, he was unreasonably called defiant in media reports.

Clearly there was no dedication to a quest for justice. First came the allegations, then came a search for rationalizations for those preconceived notions.

Now Dutch prosecutor Fred Westerbeke has announced his theory for the prosecution. He is charging four individuals, one Ukrainian, three Russian, with murder. It is widely believed that MH17 was brought down by an old Soviet surface-to-air missile system. Westerbeke is not claiming that the accused individuals pulled the trigger to launch a missile. Instead he alleges that they were responsible for providing the weapon involved.

That skirts one big problem. There is much contention about who was in possession of the weapon at the time. Russia has provided evidence of that exact same weapon being delivered to the Ukraine military even before the Soviet Union ended.

I had serious questions about who had control of the weapon at the time of the MH17 attack. So I personally sought the input of Elmar Giemulla, a German lawyer and aviation law expert. He gained prominence as the successful litigator for German victims of the July 2000 Concorde crash in Paris. Now he was looking into the MH17 disaster.

What Giemulla told me was both shocking and very logical. According to him he had ordered private high resolution satellite pictures of the probable launch site of the missile. They placed it on Kiev controlled land. The photos suggest that there is a visibly high number of empty beverage bottles, highly likely beer or vodka. That in turn suggests that the Ukrainian missile crew pushed the launch button while intoxicated.

Of course this is speculation. But so is the story that Westerbeke is staking his reputation upon. Honestly, the prevailing scenario for how the weapon was moved into place and fired sounds absolutely preposterous. It alleges that the missile launcher was transported from Russia into the self-proclaimed independent border areas of eastern Ukraine. Then an international airliner was routed by air traffic control to fly over that very same war-torn spot whereupon the plane was shot down. Doesn’t that sound fantastic?

But apparently based on that scenario Westerbeke contends the accused individuals are guilty of murder because they caused the weapon to be on that site.

To examine Westerbeke’s argument, let’s suspend for a moment disbelief in that prevailing scenario. Suppose that the four individuals actually did bring the weapon to that site. What about those who made the decision to bring the aircraft to that same spot? Shouldn’t they be accused of murder too? But they have not been. There seems to be a double standard in Westerbeke’s logic.

According to what Giemulla told me, the number one crime was committed by Ukraine in allowing civil aviation over a conflict zone. The record shows a couple of earlier shoot-downs in the period preceding the MH17 flight, albeit not in the same exact spot. What were the aviation officials thinking of? Was Malaysian Air flight 17 set up for disaster?

Even Malaysian prime minister Mahathir Mohamad has vociferously argued against the Dutch-NATO-US politicization of the tragedy. Dr. Mahatir said, “From the very beginning it became a political issue.” He apparently believes the agenda was just to accuse Russia of wrongdoing, adding, “It is very difficult for us to accept that.”

There is solid reason to suspect that Westerbeke’s allegations are disingenuous. I saw the report of the Dutch National Police Corps on the MH17 case. It seems not nearly as clear about the MH17 circumstances. It says that “it can be assumed that both the [weapon] and its crew came from the Russian Federation.” Is a mere “assumption”: really a rational basis on which to proceed with allegations of what would be a mass murder? And why was Russia excluded from participation in the investigation, especially when it was in possession of direct evidence about the weapon involved. Why was Russia denied discovery in the forensic case?

In a larger sense there is even more reason to suspect the Dutch motives. We must acknowledge that the MH17 investigation and subsequent criminal charges have taken place amidst a massive campaign by the US and NATO to cast Russia in a compromising role with regard to Ukraine’s political chaos.

In the book Ukraine in the Crosshairs by William Dunkerley I read of how the US State Department distributed fabricated photos to allege Russian military instigation in Ukraine. There is also documentation that photos of an artillery battery being used against the Ukraine military could actually have shown just a collection of grain harvesters. Obama was quick to advance an anti-Russia story about MH17. And now that the murder charges have been lodged, what is NATO’s position? It sounds gleeful.

NATO Secretary General Jens Stoltenberg said, “I welcome [the] announcement by the Joint Investigation Team that four suspects will be prosecuted for crimes in relation to the downing of Malaysia Airlines flight MH17 in July 2014. This is an important milestone in the efforts to uncover the full truth and ensure that justice is done for the killing of 298 people from 17 countries.”

This is far too important and consequential a matter for that kind of foolishness to be taken seriously. To blame the Russian Federation is nonsensical, period. No sane government would condone or order such barbaric actions as have been alleged.

Perhaps the shoot-down was an error made at a much lower level than that of then-president Poroshenko or any senior Ukrainian general. But in any event it is totally unjust to blame the Russian Federation. That’s especially true since international standard forensic procedures have totally excluded Russia from providing evidence and to get access to data pertaining to finding out who has done it.

My take, it was not Russia.