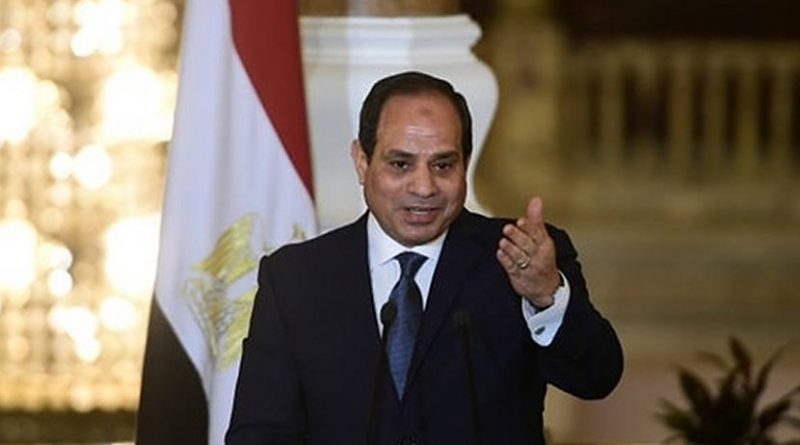 A day after Egyptian President Abdel Fattah El-Sisi on Saturday delivered a stern warning to Libya’s Government of National Accord (GNA) and allied militias, backed by Turkey, that Sirte and the Al-Jufra airbase constituted a red line for Cairo and that Egypt was ready to defend its western borders, messages of solidarity poured in from Riyadh, Amman, Abu Dhabi and Manama. The message was clear: Egypt’s national security is off limits.

El-Sisi, who was speaking to senior military officers and the heads of Libyan tribes at an airbase close to Egypt’s border with Libya, also said that Cairo now has the legitimacy to intervene in the conflict, with the intention of protecting its western border and bringing stability. But he also called for a political solution to the nine-year-old Libyan conflict based on UN resolutions, the Berlin conference and his own initiative, which he launched this month.

The threat of an Egyptian military intervention was shunned by the Tripoli-based GNA. The US, which backed El-Sisi’s call for a cease-fire, also warned against military escalation. At the heart of Cairo’s fears is the fact that Turkey is now extending its military influence into neighboring Libya. Egyptian worries mounted when forces belonging to the Libyan National Army (LNA), loyal to Field Marshall Khalifa Haftar, were pushed back from most of western Libya last month. Haftar’s campaign to march into Tripoli stumbled as Turkey stepped in — at the invitation of the UN-backed GNA — earlier this year, bringing in Syrian mercenaries and advanced weapons, including drones and air defense systems.

Haftar, whose forces control most of eastern Libya, including Benghazi, has had the covert support of Egypt, the UAE and Russia, even as the UN attempted to mediate between Libya’s various parties while enforcing a weapons embargo. He had ignored the Skhirat agreement of 2015 and avoided committing himself to a power-sharing deal with Tripoli in subsequent meetings.

El-Sisi’s call for a cease-fire and a political solution were rebuffed by Tripoli, whose latest military victories have brought its forces to the outskirts of the strategic city of Sirte, which is considered the gateway to the oil-rich region still under Haftar’s control.

But Libya has become a conflict within a conflict. With foreign powers backing opposite sides, the geopolitical risks of an extended outbreak of proxy wars and even direct confrontation between foreign players have become dangerously real. Russia, which used military contractors to back Haftar, dispatched fighter jets to the Al-Jufra airbase last month in an attempt to counterbalance Turkey’s rising influence. The crisis has strained ties between Ankara and Moscow.

Even the EU is divided over Libya, with France condemning the Turkish military intervention and Italy continuing to support the GNA and Turkey’s role.

Egypt finds itself in a difficult position as the crisis evolves. Being no friend of Turkey, Cairo has every right to be worried about the Turkish-backed GNA, with its Muslim Brotherhood ties, getting close to its western borders. Washington, which recognizes the GNA, is wary of Russia establishing a foothold on Libyan soil.

But El-Sisi must be careful not to get dragged into an open-ended conflict in Libya. By hinting that he would be arming Libyan tribes in the east of the country, he too risks being sucked into a proxy war. Pitting tribes against tribes would deepen the Libyan wound and may result in the permanent partition of the country.

On the other hand, the GNA must understand that, by allying itself with Turkey and being backed by Qatar, it is also risking handing over whatever remains of its legitimacy to Ankara. Turkey’s agenda in Libya raises many questions, and one could argue that President Recep Tayyip Edogan’s ideological beliefs will supersede the national interests of the Libyan people and their country’s geographical unity.

There is no doubt that a direct Egyptian military intervention in eastern Libya will constitute a challenge for Cairo at a time when it is embroiled in a more dangerous threat over Addis Ababa’s refusal, so far, to reach a deal over the controversial Grand Ethiopian Renaissance Dam.

The priority must be given to finding a political solution that affirms the principles reached in previous meetings, resulting in a road map toward implementing these principles. It is also important to note that the solution must not be tied to the whims of one man. Haftar may have become more of a liability than an asset. Instead, the elected legislature in Tobruk, under Aguila Saleh, could become the party to carry out future negotiations. Saleh has already proposed an initiative of his own; one that could provide a solid ground for fresh talks.

One country that could play the role of an honest broker is Algeria, which, under President Abdelmadjid Tebboune, has urged all Libyans to find common ground away from foreign influence. Tebboune met this week with the GNA’s Fayez Al-Sarraj and last week with Saleh in a bid to restart dialogue. His warning to both sides that Libya could face a Syria-like scenario must be taken seriously before it is too late.