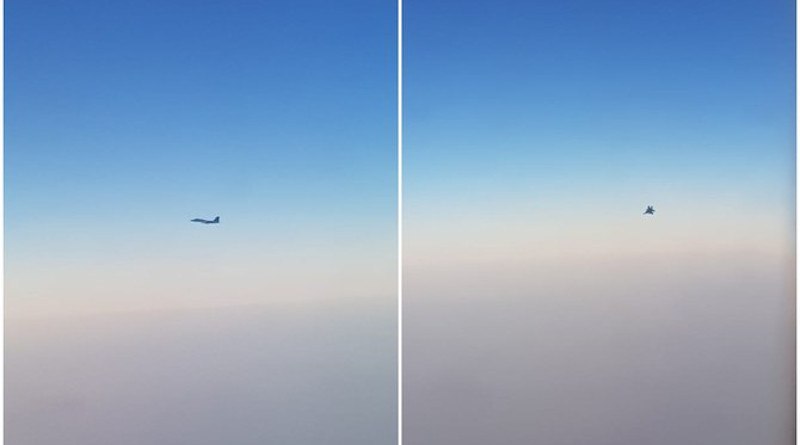 An Iranian passenger plane was intercepted by two fighter jets in Syrian airspace during a flight from Tehran to Beirut.

The pilot of the Mahan Air plane said two US jets approached the airliner forcing him to change altitude to avoid a collision, Iran’s IRIB news agency reported.

Earlier, the agency said the Airbus A310 had been approached by a single Israeli jet.

Aviation experts told Arab News that the plane, Flight 1152, landed at Rafic Hariri International Airport at 7.50 p.m. after flying from Tehran through the airspace of Iraq and Syria.

The two warplanes intercepted the plane at 6.14 p.m.

“The pilot was forced to suddenly increase the altitude by 350ft to avoid the intercepting planes, which led to the state of turbulence inside the plane,” a source from Lebanese Plane Spotters said.

Immediately after the plane landed, video circulated on social media showing the shocked passengers on board, a child with a bandaged head and another person with a head wound. The passengers’ contents were scattered across seats and along the floor. Some passengers were wearing life jackets.

In another video passengers could be heard screaming and in panic.

Ambulances were seen on the runway in Beirut transporting four injured passengers, including an elderly man, to hospital.

The US imposed sanctions on Mahan Air in 2011, saying it provided financial and other support to Iran’s Revolutionary Guards

In a separate incident, Lebanese Army Command said an “Israeli enemy reconnaissance plane” entered Lebanese airspace in the morning over the town of Kafr Kila, and carried out a circular flight over southern Lebanon.

The military adde that a similar enemy plane “violated Lebanese airspace” over the town of Aitaroun shortly after.