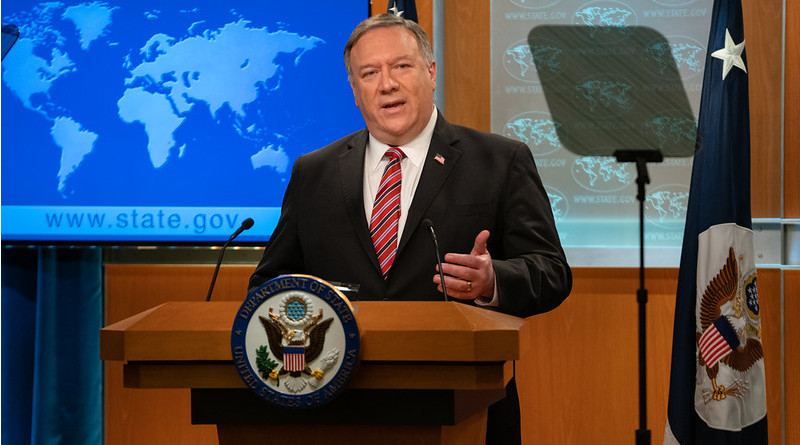 U.S. Secretary of State Michael R. Pompeo delivers remarks to the media in the Press Briefing Room, at the Department of State in Washington, D.C. [State Department Photo by Ronny Przysucha / Public Domain]

U.S. Secretary of State Mike Pompeo outlined how the relationship between the United States and China has gone from one of guarded optimism, as witnessed in the era of the Nixon administration, to one today that he called “hard truth.”

Pompeo spoke Thursday in California at the Nixon Foundation in Yorba Linda.

“[Former President] Richard Nixon was right when he wrote in 1967 that ‘the world cannot be safe until China changes.’ Now it’s up to us to heed his words,” Pompeo said.

The secretary said the “old paradigm of blind engagement with China has failed. We must not continue it. We must not return to it.”

Instead, “we need a strategy that protects the American economy and our way of life. The free world must triumph over this new tyranny,” he said.

Pompeo paid respect to Nixon’s historic trip to Beijing nearly 50 years ago and his philosophy that “we simply cannot afford to leave China forever outside of the family of nations … the world cannot be safe until China changes. Thus, our aim – to the extent that we influence events – should be to induce change.”

But Pompeo argued that the engagement Nixon sought benefited China more than the U.S.

The United States ordered the closure of China’s consulate in Houston, saying Wednesday that the move was done to “protect American intellectual property and Americans’ private information.”

“We are setting out clear expectations for how the Chinese Communist Party is going to behave, and when they don’t, we’re going to take actions that protect the American people, protect our security, our national security, and also protect our economy and jobs,” Pompeo said Wednesday during a visit to Denmark.

China rejected the U.S. action as a “political provocation” and said it would respond with “legitimate and necessary actions.”

“China strongly condemns and firmly opposes such an outrageous and unjustified move which sabotages China-U.S. relations,” the Chinese Embassy in Washington said Thursday in a statement. “The U.S. accusations are groundless fabrications, and the excuses it cites are farfetched and untenable.”