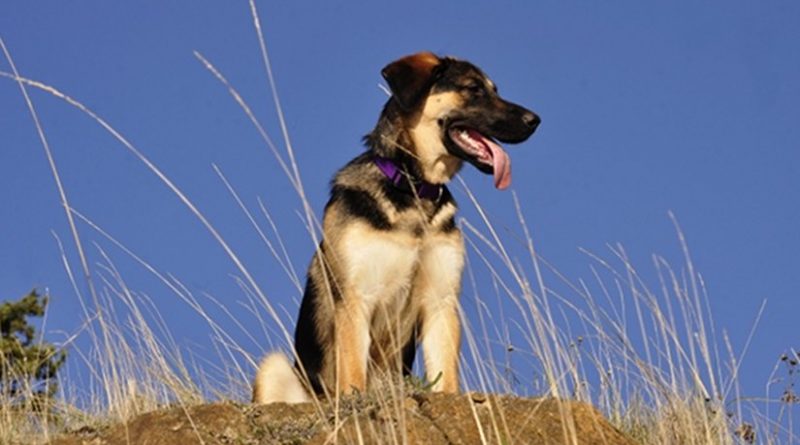 Specially-trained victim recovery dogs can perform phenomenal feats in sniffing out the whereabouts of bodies and body parts, even beneath mounds of rubble or deep below water. But University of Huddersfield researcher Lorna Irish is investigating ways in which they can carry out their grim but vital tasks even more efficiently.

In the course of her work she is forming links with a number of police forces throughout the UK and some of their handlers are bringing VR dogs to the University to take part in specially-devised experiments.

Recent visitors were John Ellis and Mark Adams, from South Yorkshire Police, who brought trained victim recovery dog, springer spaniel Kip to the University. Lorna set out a sequence of vials containing different odours that she had prepared in the lab. These chemicals are known to be produced from the decomposition process. Alongside these test chemicals were “positive controls” associated with human cadavers, such as human bone – from archaeological sources – and pork at various stages of decomposition. Pork meat is used for training such dogs due to the ethical and legal problems associated with obtaining human material. It is thought to be the closest analogue for human flesh for decomposition studies. There were also “negative controls” – smelly chemicals not associated with decomposition, such as clove oil.

Kip correctly identified the odours derived from decomposition and was not distracted by the “negative control” smells. It was a successful demonstration. But in the field, VR dogs can sometimes be distracted by “false positives,” such as dead animals, or even mushrooms, explained Lorna. If she can arrive at a greater understanding of the chemistry of odours from human cadavers, then VR dogs can be extra efficient.

“If you train a dog with a chemical that is specific to human decomposition, you can enhance its ability. It is not about changing the way the dogs do it, but improving it,” she added.

Lorna, aged 24, from Ilminster in Somerset, achieved first class honours for her BSc degree in forensic and analytical science. She then successfully applied to undertake a PhD project revolving around The Identification and Quantification of Gaseous Products in relation to Cadaver Dog Efficiency that had been devised by the forensic anthropologist Dr Anna Williams, who came to the University of Huddersfield in 2013. Lorna too relocated to Huddersfield to continue her research, for which she is supervised by Dr Williams and by the analytical chemist Dr Gareth Parkes.

Lorna has just passed the half-way stage in her research – due for completion in September 2015 – and has found the project and its analytical chemistry “absolutely brilliant,” in and out of the lab.

In the UK there are approximately 70 VR or cadaver dogs, mostly used by police forces, although organisations such as search and rescue teams also have them. There is not a very widespread awareness of the VR dogs and their work, says Lorna, although they have been used for many years.

“They are mostly used for human remains detection, not just in murder cases but for suicides too. For example, if somebody has been hit by a train, the dogs are used to locate body parts. They have also been used after incidents such as the 7/7 bombings.

“They can also be used for blood detection, if there has been an assault for example, and in Lancashire they train their dogs to identify semen as well, so they can be used in sexual assault cases,” said Lorna.

During her research she has travelled widely, visiting a number of police forces’ operational cases, and her visits to Northern Ireland have enabled her to witness the work of its VR dogs who have the astonishing ability, from on board a boat, to detect the odour from an underwater cadaver. The chemicals given off by submerged remains have become a key strand of Lorna’s research.

She has plans to visit more police forces around the UK that have VR dogs, in order to witness their training methods, and there will be further visits to the University of Huddersfield – for example, victim recovery dogs and their handlers from Dyfed Powys in Wales is scheduled to come in October.

Lorna’s research fascinates her as a scientist and she is a dog lover too, although her collie crosses Leila has not been trained in cadaver detection… yet!