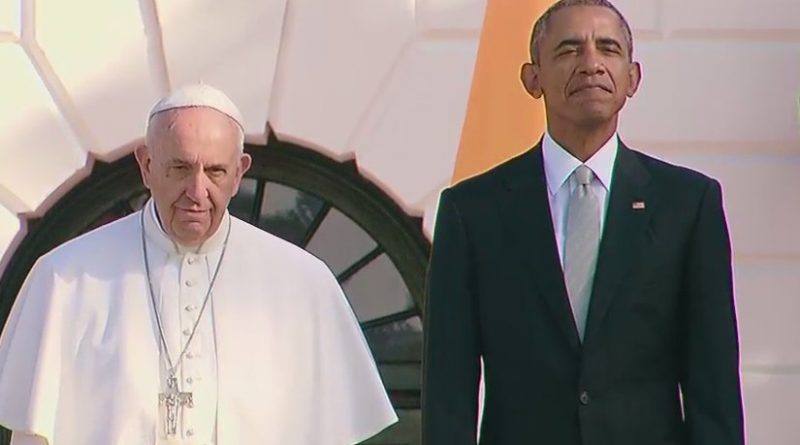 Yesterday morning at the White House, I saw Pope Francis urge world leaders to protect the most vulnerable and build an economy that leaves no one behind.

As I watched Pope Francis, I was jubilant. After all, the organization I direct, Jubilee USA, was founded by religious leaders and Pope John Paul II to do just that – win global economic reforms to benefit those living in poverty.

Debt relief is part of the broader concept of Jubilee – of creating an inclusive global economy where we are all protected from becoming too rich or too poor.

Pope Francis is not only talking about debt. Almost everyday he refers to the actual policies that trap people in poverty. He’s raised concerns about tax havens to a gathering of dignitaries from known tax havens. He endorsed a United Nations global bankruptcy process. He declared a ‘Jubilee Year’ in the Catholic Church focused on mercy and compassion for the poor. Whenever he speaks, we hear about how corruption, austerity and trade policies impact the poor.

Much will be written this week about Pope Francis as he tours the U.S. Much will be said about what the Pope thinks or even feels – about what his views are on this or that political or religious hot button issue. It’s helpful to remember that the Pope himself is a prolific writer and speaker. His words speak for themselves.

“Working for a just distribution of the fruits of the earth and human labor is not mere philanthropy. It is a moral obligation. For Christians, the responsibility is even greater: it is a commandment. It is about giving to the poor and to peoples what is theirs by right. The universal destination of goods is not a figure of speech found in the Church’s social teaching. It is a reality prior to private property. Property, especially when it affects natural resources, must always serve the needs of peoples. And those needs are not restricted to consumption. It is not enough to let a few drops fall whenever the poor shake a cup which never runs over by itself. Welfare programs geared to certain emergencies can only be considered temporary responses. They will never be able to replace true inclusion, an inclusion which provides worthy, free, creative [and] participatory… work.” – July 9, 2015

“While the income of a minority is increasing exponentially, that of the majority is crumbling.” – May 16, 2013

“A way has to be found to enable everyone to benefit from the fruits of the earth, and not simply to close the gap between the affluent and those who must be satisfied with the crumbs falling from the table, but above all to satisfy the demands of justice, fairness and respect for every human being.” – June 20, 2013

“Certainly every country needs economic growth and the creation of wealth, and the extension of these to each citizen, without exclusion. And this is necessary. But the creation of this wealth must always be at the service of the common good, and not only for the benefit of a few. On this point we must be very clear.” — July 11, 2015

“Those charged with promoting economic development have the responsibility of ensuring that it always has a human face. Economic development must have a human face. We say no to an economy without such a face! They have in their hands the possibility of providing employment for many persons and in this way of giving hope to many families. Putting bread on the table, putting a roof over the heads of one’s children, giving them health and an education – these are essential for human dignity, and business men and women, politicians, economists, must feel challenged in this regard.” – July 11, 2015

On Corporate Tax Avoidance and Corruption

“[There] is widespread corruption and selfish tax evasion which have taken on worldwide dimensions. The will for power and possession has become limitless.” – May 16, 2013

“A new, invisible and at times virtual, tyranny is established, one which unilaterally and irremediably imposes its own laws and rules. Moreover, indebtedness and credit distance countries from their real economy and citizens from their real buying power.” – May 16, 2013

“The new colonialism takes on different faces. At times it appears as the anonymous influence of mammon: corporations, loan agencies, certain “free trade” treaties, and the imposition of measures of “austerity” which always tighten the belt of workers and the poor. We, the bishops of Latin America, denounce this with utter clarity in the Aparecida Document, stating that “financial institutions and transnational companies are becoming stronger to the point that local economies are subordinated, especially weakening the local states, which seem ever more powerless to carry out development projects in the service of their populations.” – July 9, 2015

“I think of the difficulties which, in various countries, today afflict the world of work and business today; I am thinking of how many, and not only young people, are unemployed, often due to a purely economic conception of society, which seeks profit selfishly, beyond the parameters of social justice. I wish to extend an invitation to solidarity to everyone, and I would like to encourage those in public office to make every effort to give new impetus to employment.” – May 1, 2013

*Eric LeCompte is the Executive Director of Jubilee USA Network and serves on UN expert working groups that focus on global financial issues. He has advised the Vatican on finance issues and global poverty. Learn more: www.jubileeusa.org

Home » Pope Francis In His Own Words – OpEd