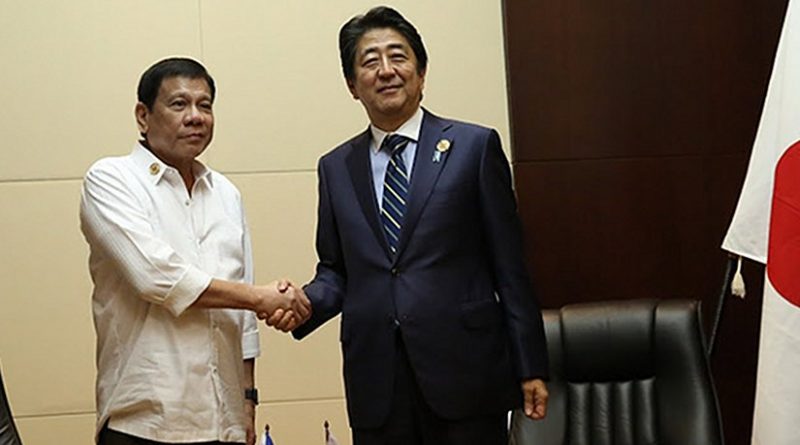 President Rodrigo Duterte had gone on a total of 21 foreign trips, including all ASEAN Member States, China, Japan, Peru, New Zealand, Saudi Arabia, Bahrain, Qatar, Hong Kong, and Russia. He went on these trips in a span of one year, effectively making him the most traveled president during his first year in office.

Duterte’s visit to the said countries bears significance for a number of reasons. His visit to Myanmar on 19-20 March 2017 marked the completion of his tour of all Member States of ASEAN. He successfully visited the nine other Member States less than a year into his presidency, a feat which his predecessors had not accomplished. The round of visits to ASEAN is particularly significant given the Association’s 50th founding anniversary and the Philippines’ chairmanship this year. It also manifests the government’s resolve in engaging and cooperating with its neighbors in matters of mutual interest.

Meanwhile, Duterte’s engagement with countries in Northeast Asia, Middle East, and Russia is politically significant as the Philippines seeks to expand and forge relations as a manifestation of an independent foreign policy. The diversification of partnerships recognizes the growing interdependence among states and contributes to the Philippines’ national interest and domestic agenda. It will prove to be essential in facing domestic security concerns stemming from the spread of illegal drugs and terrorist activities in the south, among others; along with financial and societal reforms aimed at attracting foreign investments, accessing new markets, curtailing unemployment, and boosting overall economic development.

In ASEAN, it has been both tradition and protocol that the first state visit of a new Head of State is to a fellow ASEAN Member State. In the Philippines, this tradition was carried out by every new administration since ASEAN’s establishment in 1967.

Duterte’s debut on the international stage was at the 28th and 29th ASEAN Summits in Vientiane, Laos on 6-8 September 2016. At the closing ceremony of the Summits, Duterte accepted the Philippines’ chairmanship of ASEAN for 2017 and revealed the theme, “Partnering for Change, Engaging the World,” which encapsulates the importance of continued collective efforts by ASEAN Member States to create positive change for the peoples of the region and to involve Dialogue Partners in the stewardship of regional security, stability, and growth.

After Lao PDR, Duterte visited the following ASEAN Member States: Indonesia, Vietnam, Brunei Darussalam, Cambodia, Singapore, Thailand, and Myanmar. Highlighted during the visits were discussions of common issues and interests, including addressing the threat of terrorism, strengthening maritime security cooperation, combating transnational crimes, committing to a drug-free ASEAN Community, and improving air and sea connectivity for enhanced trade and people-to-people exchanges. On economic cooperation, the three countries recognized the need to create an environment conducive to business in areas such as agriculture, food processing and development of halal products, tourism services, and expansion of Islamic banking. Meanwhile, technical cooperation was also in the agenda in President Duterte’s visits to ASEAN Member States. Cambodia, in particular, expressed its intent to seek opportunities for technology transfer of rice seeds from the Philippines, while Thailand has sought Philippine cooperation in the fields of science and technology, and agriculture, particularly swamp and dairy buffalo production.

Duterte’s visits to China and Japan have resulted in cooperation on the improvement of the Philippines’ lagging infrastructure by drawing pledges for mass transportation systems, railways, dams, and ports. Japan, for its part, has boosted support for maritime law enforcement by providing aircrafts, boats, ships, and vessels to the Philippine Coast Guard (PCG) for search and rescue and counter-terrorism operations. Similarly, Duterte’s visit to Russia explored means to deepen cooperation on defense, military, technical, and investment cooperation between the Philippines and Russia. Meanwhile, countries like New Zealand and Saudi Arabia have expressed their willingness to cooperate on counter-terrorism. Moreover, the visit to Saudi Arabia and Qatar focused on labor relations given the presence of many Filipino Overseas Workers in these countries.

What’s at stake during diplomatic visits?

Diplomatic visits may come in the form of a state visit, official visit, or working visit.  Exchange of visits among state leaders are often little understood, which lead people to overlook the value of a president’s foreign travels. State visits accord the highest level of hospitality, honor, and formality between leaders; thus reflecting the strength and vitality of a bilateral relationship. It must therefore be viewed optimistically and regarded as a vital part of foreign policy-making and diplomacy.

The rounds of discussions and negotiations are all aimed at ensuring the public’s socio-economic welfare and safety, especially at a time when traditional and non-traditional threats pose risks to states and their peoples. It is because a country’s domestic agenda influences its foreign policy and vice versa. The Philippines’ pressing political-security issues such as combatting transnational crimes, including the spread of illegal drugs, are considered high priority in the agenda of bilateral talks. Equally important, the expansion of bilateral relations will contribute to the achievement of the administration’s 10-Point Socioeconomic Agenda that prioritizes the acceleration of infrastructure, development of rural and value chains, enhancement human capital through health and education systems, promotion of science and technology, and improvement of social protection programs, among others.

Diplomatic visits are about maintaining and strengthening existing relations, if not about developing new relations between states. They provide leaders the opportunity to pursue common and national interests by forging agreements, attracting investors, expanding trade and investments, exchanging best practices, and discussing pressing issues towards cultivating a better understanding of one another. In Myanmar, for example, Duterte pledged USD 300,000 in humanitarian assistance to Rakhine State, demonstrating the Philippines’ resolve to play an active role in regional affairs by promoting harmony amongst the peoples of ASEAN. Moreover, a highlight of Duterte’s foreign visits is his regular meetings and dialogues with overseas Filipino communities to reach out to Filipinos abroad, which is equally important in strengthening state-to-state relations.

Given the increasing regional security challenges, complex domestic concerns, desire for economic growth, and need to fast-track regional integration, the Philippines finds itself at a critical juncture of having to carefully calibrate and balance its domestic and international interests through engagements with other partner countries. The President’s visit to ASEAN states has been essential in gaining support for the country’s ASEAN Chairmanship and in pushing for a united stand on issues affecting the region. As for his visit to other countries, it is a gesture of his intent to diversify Philippine foreign relations in a changed strategic and economic environment. It also reflects the country’s aim under the Duterte administration of not being reliant on solely one partner or being too vulnerable to another. These are all in view of pursuing an independent foreign policy anchored on shared values of democracy, adherence to the rule of law, and strengthening ties with neighbors and external partners. More importantly, the visits gave the Philippines an opportunity to show its determination to partner for change and engage the world towards achieving a more secure, stable, and prosperous ASEAN Community.

About the author:
*Jeremie P. Credo is a Foreign Affairs Research Specialist with the Center for International Relations and Strategic Studies of the Foreign Service Institute. Ms. Credo can be reached at [email protected]

Source:
This article was published by FSI. CIRSS Commentariesis a regular short publication of the Center for International Relations and Strategic Studies (CIRSS) of the Foreign Service Institute (FSI) focusing on the latest regional and global developments and issues.