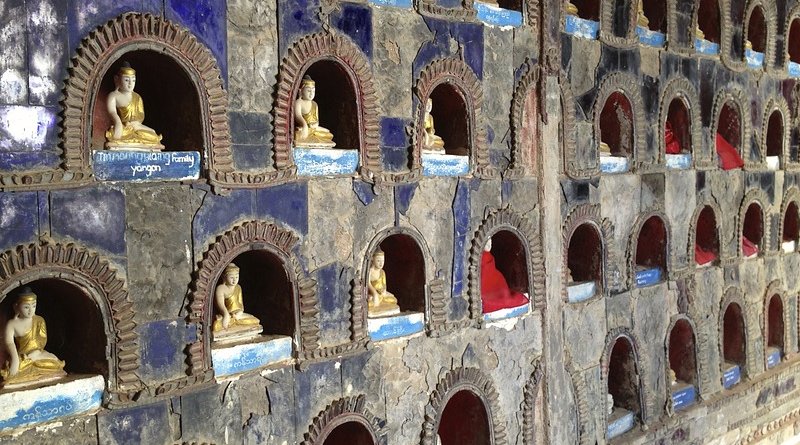 Despite declaration of “unilateral” cease fire by both sides, there has been intensive fighting between the three groups of the Northern Alliance- the TNLA, MNDAA and the AA- the Arakan Army with the Myanmar Army- Tatmadaw.

The offensive by the three groups on August 15th disrupting communication and trade on the Chinese border near Musse for many days is said to have surprised the Army and the Myanmar Government. It is doubtful whether the Chinese could also have been surprised.

The pre-planned simultaneous attack at many places in the northern Shan State and even in places close to Mandalay region could not have been done without proper planning and preparations for many days. The movement of insurgents spreading out over a wide area and transport of military supplies over many days    could not have happened without knowledge if not acquiescence from the Chinese authorities in Yunnan.

Despite three rounds of meetings on China’s intervention, the most recent one being on the 18th, no agreement could be reached.  All that was agreed was that they would meet again for further discussions!

Some common characteristics among the three groups were

Even when the talks were going on, between the three groups, there was heavy fighting near Minbaya township in Rakhine State and the Myanmar Army is alleged to have used helicopter gunships against its own people. The Arakan Army has continued to inflict causalities on the Myanmar Army.

In the negotiations that were taking place between the three groups ( they call it ‘Brotherhood’ alliance), the Army’s main demand has been that the three groups should go back to their original places- that the Arakan Army to Laiza, the MNDAA back to Kokang where they belong to and the TNLA to the Palaung Self -Administered Zone before any bilateral ceasefire could be agreed. This is unlikely to happen in the near future and prolonged fighting between the three groups on one side and the Army on the other is expected to continue for a long time.

Individually the three groups are small in number and cannot sustain themselves for long without outside support.  It is said that both the AA and the TNLA are fostered by the KIA- the second largest ethnic insurgent outfit and the MNDAA by the “Wa” group.  And all of them come under the umbrella of FPNCC (Federal Political Negotiation Committee and the group as a whole led by Wa have not signed the National Cease fire agreement.

The Wa Group which is the strongest and the biggest of ethnic groups is said to have its own courts, schools and hospitals and even a modern TV station!  What is more the currency used is Yuan and not Kyat and the common language spoken is not Bamar but Chinese.  Except for reiterating periodically that they are part of Myanmar the Wa group has nothing in common with Myanmar and for all practical purposes is a part of ‘Yunnan province.

There was some problem in deciding on the venue for the third round of talks.   The three groups of the Northern Alliance had suggested either Pangshang the Headquarters of the Wa groups or in China.  The Government was not willing to accept Pangshang for security reasons and finally they settled for Kengtung in Shan State.

It is now being increasingly felt by the stake holders that without China’s involvement the ethnic strife cannot be managed. Thus China has positioned itself to be relevant in the negotiations.

It may be recalled that new Chinese Ambassador Chen Hai declared on August 22 that China “seriously” condemns the violent attacks in the Northern Shan State and the Mandalay garrison and that it would continue to support Myanmar’s peace proposals in all possible ways and the peace dialogue. It does not take much time for China to get at least those operating near their border the TNLA and the MNDAA to end the fighting.

Following the August 15 attacks, China called all the three leaders of the groups to Kunming for urgent talks.  Sun Guoxiang, the special emissary of the Chinese who is dealing with the Myanmar insurgent groups told them that the “fighting was unacceptable” to China. Yet clashes have continued.

So, on the surface, it looks that China is doing all that it could to bring the fighting between the three groups of the Northern Alliance and the Myanmar Army to an end.  All the three meetings were held at China’s behest and it is learnt that Sun Guoxiang met both Suu Kyi and the Army Chief before the last round of meeting at Kengtung on the 18th of this month that failed to reach an agreement even on the first step of having a bilateral cease fire.

If one is to make a “benefit analysis” it would appear that China would gain most with the projects like the Musse- Mandalay road, high speed railway from China through Mandalay to Yangon, the pipe line and the development of Kyaukphyu port and economic zone being completed in a stable and peaceful environment. Is it possible that these small groups like TNLA and the MNDAA are defying the Chinese and going ahead with attacks on the infrastructure on the Myanmar China border causing disruption to traffic and trade?

There is an increasing suspicion and has been expressed by some even in Myanmar media that China is not doing enough and does not want to do enough either. Only then China would continue to be relevant in the peace process and Myanmar will have look upon the Chinese authorities to control the insurgents.

It is said that even smaller groups like the Kokang are taking the offensive just to keep themselves relevant- but the general view shared by many is that China is in a position to bring the fighting to an end and get the seven groups alliance led by Wa to join the peace process and not push for a  new narrative on the peace deal as it has been doing so far.

Though the Wa group has been producing in a limited way some its arms, the weapons and ammunition used by the three groups now engaged in fighting the Myanmar Army are supplied by the Chinese directly or or in flourishing arms market at Rui li.  One way of putting pressure China is to stop supplying arms and also ensure that Wa does not support the other groups with arms.  This is not happening.

Though not related to China, there was an interesting report in the media that the Indian Intelligence had reported that the Arakan Army had set up several camps across Mizorm’s Lawngtala district and thus posing a threat to the Indian Kaladan Project.  This appears to part of a “fake” narrative and so far, the AA has not interfered with Indian projects except for one odd incident when some bridge laying equipment was burnt. India is in no position either to stop such attacks if the Arakan Army decides to do so.

There are no verifiable reports that the fighting between the Arakan Army and the Myanmar Tatmadaw has spilled into India. The chief of the Arakan Army had also declared in one of his interaction with the media during the 30th anniversary celebrations in the Wa capital at Pangshang that they will not disrupt development projects in the region. There is no reason to give credence to such fake reports that seem to be circulating in the North east.