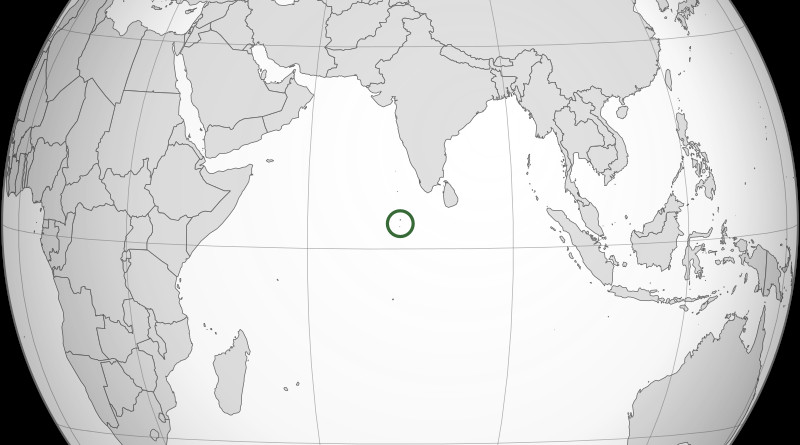 Location of Maldives in the Indian Ocean. Credit: Wikipedia Commons

On 10 September 2020, Washington and Malé signed the “Framework for U.S. Department of Defense-Maldives Ministry of Defence Defense and Security Relationship.” This agreement ostensibly intends to deepen bilateral efforts towards maintaining peace and security in the Indian Ocean Region (IOR). Maldives’ defence minister claimed that the framework reiterated mutual commitment towards a free and open Indo-Pacific. However, the implications of this agreement are far more profound for IOR’s security architecture than meets the eye.

Much of the discourse on global security architecture and international politics has been China-centric for the better part of the 21st Century. The China fixation has led to the birth of a loose, undefined security grouping of Australia, India, Japan and the US (the ‘Quad’), which has also re-conceptualised the geographic expanse of Asia-Pacific as the Indo-Pacific. This has left the mandarins in Beijing with much to be suspicious of.

The Maldives–US defence agreement has only reaffirmed the Indo-Pacific concept and general global concerns vis-à-vis China. For Maldives, the deal is of greater significance. Under the administration (2013-18) of the currently imprisoned former President, Abdulla Yameen, Maldives moved substantially close to China, leaving its traditional well-wishers concerned about bilateral ties. The cause for concern pertained not only to political bonhomie and economic cooperation but also the strategic implications it engendered.

First, Maldives, like its fellow island-neighbour Sri Lanka, straddles critical sea lanes of communication (SLOC) in the IOR. It was to secure these SLOC that Beijing began investing its military, economic and political capital in the IOR and beyond. The Malé-Washington defence agreement not only sets out to counteract this outreach and influence China hopes to achieve in the IOR, but also re-establishes the US’ predominance in the region.

Second, Maldives is located near the US military facility in the British Indian Ocean Territory of Diego Garcia. Given the continuing dispute (between the UK and Mauritius) over Diego Garcia’s ownership despite the International Court of Justice’s (non-legally binding) ruling in Mauritius’s favour, the Malé-Washington agreement indicates that the US is diversifying the locations of its military presence in the IOR. For the US, which thus far did not have a formal security agreement with the Maldives, the pact enables shoring up of US presence and commitment not only in the wider Indo-Pacific but also in the more active seas of the IOR.

Third, the Maldivian archipelago is located near the Chinese-funded, developed and later, owned, Hambantota Port in Sri Lanka. This port project now symbolises the debt-trap driven negative aspects of China’s global outreach through its Belt and Road Initiative (BRI) and continues to be a source of concern for India in terms of regional security and strategic architecture.

This defence agreement, which has been in the works for nearly a decade, was rumoured to have been scuttled at New Delhi’s behest in 2014 by the then Maldivian President, Yameen. However, Yameen’s keen willingness to sign onto China’s BRI in 2014 raised a few questions. It was his embrace of Beijing that irked New Delhi; until recently, Maldives and Sri Lanka had been considered as being in India’s security and strategic sphere of influence.

Apart from geographical proximity, New Delhi’s maritime outlook has also been a driving force in guiding Indian assistance to Maldives during times of crisis. Be it via ‘Operation Cactus’ during the failed 1988 coup attempt; during the 2004 tsunami; or during the fire-mishap that destroyed Male’s sole desalination plant causing a drinking water crisis in December 2014, India was always there for Maldives.

On shared concerns vis-à-vis neighbourhood seas, India, the Maldives and Sri Lanka signed a Trilateral Maritime Security Cooperation Agreement in 2013. A year earlier, India and the Maldives had expanded their biannual India-Maldives ‘DOSTI’ Coast Guard exercises (which had been initiated after ‘Operation Cactus’), to include Sri Lanka.

Such engagements nearer home paved the way for India to deepen its ties with other IOR island states such as Mauritius and Seychelles, bolstered by Indian Prime Minister Narendra Modi’s 2015 visit. The scope of the newly created Indian Ocean Division (IOR) in India’s Ministry of External Affairs now also includes Madagascar, and Réunion (a French overseas territory).

For the US, the defence agreement with Maldives may be in line with similar arrangements elsewhere. In the South Asian context, its political and security implications are different. While India has been reluctant to entertain direct military involvement of third countries, especially extra-regional powers, in the neighbourhood (including of the erstwhile Soviet Union during the Cold War years), the perceived change in India’s stance, if true, begs several questions.

Has India relinquished its security commitments to the neighbours and allowed the US to assume that role in South Asia? If yes, will this not engender aggressive Chinese counter-engagement, and encourage countries like Sri Lanka to go their way? If so, will it in turn make South Asia the arena for contestation in a neo-cold war between the US and China, that too, in the shared Indian Ocean waters, more than it is already?

*Dr. Sripathi Narayanan can be reached at [email protected]