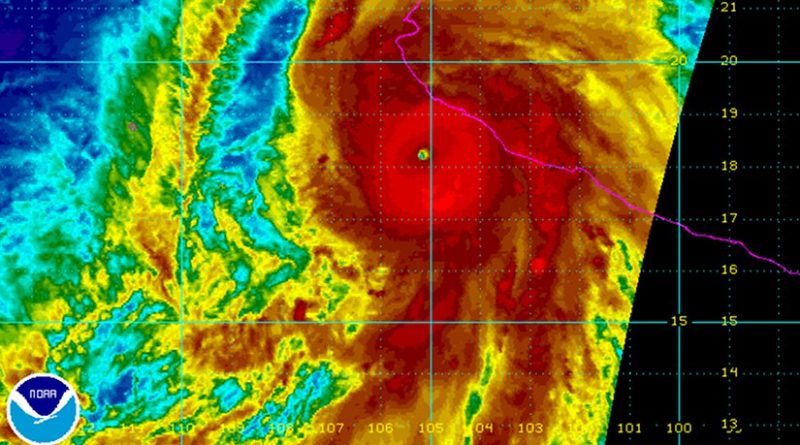 Hurricane Patricia, predicted to be one of the most dangerous storms on record, has begun making landfall in Mexico’s western state of Jalisco, according to the country’s National Meteorological Service, and could level towns and villages across the region.

According to the National Hurricane Center, Patricia officially made landfall at 6:15 pm, CDT, as a Category 5 with winds of 165 mph. It came ashore near Cuixmala, Mexico.

Residents were warned to prepare for 200-mph — which later slowed to 190-mph — winds as the storm made its way toward Mexico’s Pacific coast. Robert Ramirez de la Parra, director of CONAGUA, the Mexican agency that includes the national weather service, said those wind speeds could make “Patricia the most dangerous storm in history.”

Officials are also concerned over flash floods. With rainfall estimates between 8 and 12 inches – with some areas expected to receive as much 20 inches – the US National Hurricane Center has issued a warning to the nearly 7 million residents living near the coast.

Some experts also predicted that the storm could cause 40-foot waves.

“Residents in low-lying areas near the coast in the hurricane warning area should evacuate immediately, since the storm surge could be catastrophic near and to the east of where the center makes landfall,” the agency said in a statement.

The Mexican government declared a state of emergency and acted quickly to install preventive measures, especially in the states of Jalisco, Colima, Michoacan, Guerrero, and Nayarit. Over 1,780 shelters have been set up, with 50,000 aid workers ready to assist, and 4,000 officers of the Mexican navy were dispatched.

Experts were also alarmed by how quickly Patricia became a Category 5 storm. It rose from tropical storm in a 24-hour period.

The Pacific coast is also dotted with a number of beach resorts. While many vacationers evacuated ahead of landfall, some have decided to wait it out.

“It’s almost as if it’s literally ‘the calm before the storm,'” Laura Diane Rebholz, an Arizona resident vacationing in Puerto Vallarta, told NBC News. “It’s very much business as usual around the resort with staff seemingly unfazed by the hurricane.”