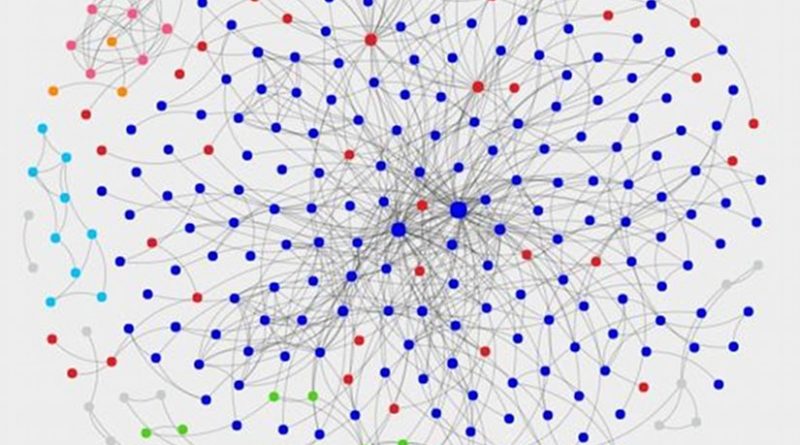 In the social network underlying the Ossianic epic, the 325 nodes represent characters appearing in the narratives and the 748 links represent interactions between them. Credit: Coventry University

The social networks behind one of the most famous literary controversies of all time have been uncovered using modern networks science.

Since James Macpherson published what he claimed were translations of ancient Scottish Gaelic poetry by a third-century bard named Ossian, scholars have questioned the authenticity of the works and whether they were misappropriated from Irish mythology or, as heralded at the time, authored by a Scottish equivalent to Homer.

Now, in a joint study by Coventry University, the National University of Ireland, Galway and the University of Oxford, published today in the journal Advances in Complex Systems, researchers have revealed the structures of the social networks underlying the Ossian’s works and their similarities to Irish mythology.

The researchers mapped the characters at the heart of the works and the relationships between them to compare the social networks found in the Scottish epics with classical Greek literature and Irish mythology.

The study revealed that the networks in the Scottish poems bore no resemblance to epics by Homer, but strongly resembled those in mythological stories from Ireland.

The Ossianic poems are considered to be some of the most important literary works ever to have emerged from Britain or Ireland, given their influence over the Romantic period in literature and the arts. Figures from Brahms to Wordsworth reacted enthusiastically; Napoleon took a copy on his military campaigns and US President Thomas Jefferson believed that Ossian was the greatest poet to have ever existed.

The poems launched the romantic portrayal of the Scottish Highlands which persists, in many forms, to the present day and inspired Romantic nationalism all across Europe.

Professor Ralph Kenna, a statistical physicist based at Coventry University, said: “By working together, it shows how science can open up new avenues of research in the humanities. The opposite also applies, as social structures discovered in Ossian inspire new questions in mathematics.”

Dr Justin Tonra, a digital humanities expert from the National University of Ireland, Galway said: “From a humanities point of view, while it cannot fully resolve the debate about Ossian, this scientific analysis does reveal an insightful statistical picture: close similarity to the Irish texts which Macpherson explicitly rejected, and distance from the Greek sources which he sought to emulate.”