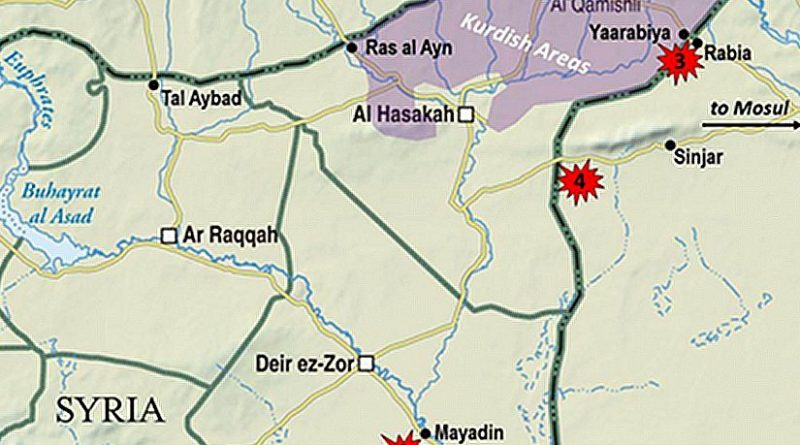 Many believe the subjects of the Islamic State (ISIS) live in a constant state of terror. Some may also think that there is no such thing as normal life in these areas. I myself have written a great deal about the crimes and inhumane acts carried out by the group in its territories in Eastern Syria, particularly Raqqa and Dar al-Zour. Indeed, most of what has been written on these topics is true. But most authors have written from a narrow point of view and with one eye closed. Many of these authors haven’t spent time on the ground and only imagine the reality. They accept the stereotypes repeated ad nauseam by the media. I grew up in the Jazeera and have traveled their a number of times since ISIS took over, spending time in different cities in order to explore the attitudes of acquaintances and relatives alike.

In al-Bukamal, I found a city that was surprisingly safe; one where individuals are unable to attack others, defraud people in the market, or festoon the streets with cigarette butts. Indeed, the city looked cleaner and seemed healthier than I had ever seen it; smoking has disappeared completely, as did any appearances of people sitting around wasting time in cafes as they used to do. It was a city completely different than the one I knew at the outbreak of the Syrian crisis. A consensus among its inhabitants, which number around 400,000 in the city and its surrounding towns, has emerged regarding ISIS rule. Perhaps the biggest proof of this is the fact that ISIS areas are among the regions of Syria from which young people are least likely to flee to Europe, a point that many seem to have missed. For if life were truly hellacious in this city and its surrounding towns, everyone would have migrated to Germany, Austria, or even Turkey. Yet most people have stayed put; they do not abandon their homes and land.

I disregarded the well-known question: Do you hate ISIS? This is because I already know the answer of why some people hate this group, and the question I had come to answer was how others can love such a bloody and criminal organization, which cuts off heads and drags people in the street after killing and cutting them up. The answers I was given were realistic and coherent, converging on a single theme: ISIS had brought “justice” to the city.

With my own eyes, I saw how the people of al-Bukamal are not as oppressed as they had been in the past. In al-Bukamal most of the people that ISIS have imprisoned are ISIS members themselves. The ISIS regime does not hesitate to punish its own members when they break the law. Even an ISIS emir was prosecuted and thrown in prison by the local governor when it was found that he had abused his power and assaulted innocent people.

This is the model of justice that ISIS is strives to bring the residents of al-Bukamal as well as to Raqqa. The cities of the region have embraced ISIS and ceded their right to use violence in order to punish those who commit crimes or do wrong. They forfeit the use of violence willingly in order to live a life of greater justice and equity. The strong are not permitted to dominate the weak, nor the rich exploit the poor, nor tribal leaders their tribesmen. All live under ISIS law equally, without “wasta” or exception.

The single most important factor that has persuaded people to accept the “Caliphate” is the fact that citizens can go out at any time of day or night without being harassed by the Free Syrian Army or being robbed blind by men claiming to be from Jabhat al-Nusra. This is most true in the tribal areas of the province.

More than one person has told me that the honor of women is never violated. Even the enemies of ISIS in the region concede this. They admit that since ISIS assumed authority, not a single incident of assault against a woman or young girl has occured. This is contrary to the desultory state of social life when Jabhat al-Nusra ruled al-Bukamal. Then, brothels operated openly. Today, you can rest assured that traveling from Dar al-Zur to al-Anbar, a distance of some 350 kilometers, you will not be harmed as long as you obey the law.

One of the main reasons ISIS has been accepted by a vast majority is that corruption was rampant in the area during the first years of the uprising against Assad. First, the militias that called themselves the Free Syrian Army ruled. They disported themselves no differently than thieves and bandits. Civilians lived in a state of anxiety that their possessions would be lifted from them one after the other and fear that they would be harassed and possibly killed. Then came al-Nusra, which was concerned only with power and gave little care to justice or good government. Between the Free Army and Nusra, society was lost. No one dared approach the authorities to resolve disputes. Once the Caliphate established control over the region, however, people have breathed easier and feel less oppressed.

In fact, the residents of al-Bukamal cannot hate members of the organization and those who work with them when they see them trying to deliver water and electricity to the people at affordable prices. Nor can they hate the organization when prices are set at reasonable levels. The ISIS fighters are vigilant on their behalf and up into the night in order to provide for them. This reality destroys hatred, and although some people in the area may not want the organization to remain in power, the weak do, as do the poor who have no one else to fend for them. It is true that some fighters have special privileges, but these are a minority and do not compare to those enjoyed by the officials who were previously aligned with the government, or the fighters of the Free Syrian Army or al-Nusra.

ISIS has all the moral and material capability it needs in order to rebuild the cities it controls. More importantly, it possesses the will to provide a better life for the people. It is still unable to adopt the modern techniques necessary to improve the lives of its people as it promises, but it strives to attain them.

The planes that fly over ISIS-controlled territories have had only one real victory. It is not the killing of fighters or the obstruction of the movement of the organization. Rather, they have simply prevented the group from delivering services to the community, and this is the only real achievement of the coalition fighting ISIS.

I seek to draw a realistic image of ISIS, one that can be compared with and contrasted to the picture of a bloody organization. For it is impossible for a bloody murderous regime to rule without inducing physical and societal security. But this is rarely mentioned in order to tarnish the image of the organization, one that does not need any more than the truth to do so.

The question is, has there developed an ISIS society, meaning has the organization integrated into the larger community? Until now, the group cannot speak of an “ISIS society” in any real sense; in that it is fear and terror that still rules the community. But with the passage of time, if the regime stays in power at least three more years, I expect that there would be a real ISIS society, and this is the biggest fear with regards to the Eastern regions. From this ISIS society will be born extremist and terrorist ideas.

*Omar Al-Wardi is a pseudonym for a Syrian who was brought up in the Jazeera region of Syria, where ISIS now rules and who has visited the region many times since.
Translated by Richard Hanania, a political science PhD student at UCLA

Home » A Trip To The ‘Caliphate’: Oppressive Justice Under Islamic State – OpEd