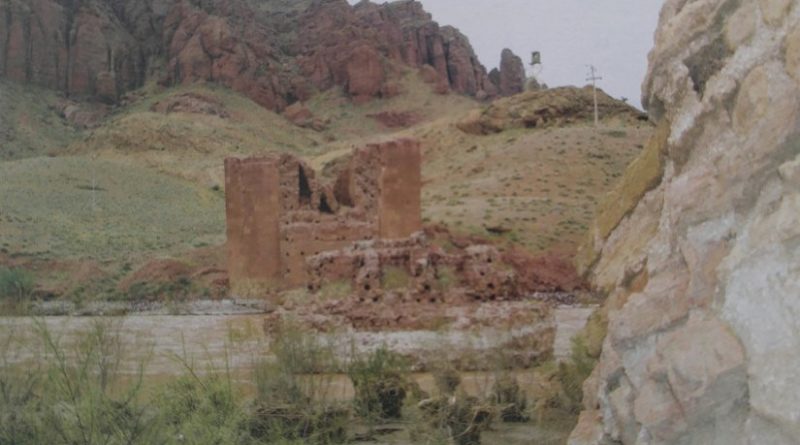 The overall cultural image and treasures of the Autonomous Republic of Nakhchivan, are significantly enriched through the study of the Goynuk Fortress, Gulum Gulum Sacred Place, Ganza Bath House, Gulustan Tomb and the Gulustan Bridge.

The fifteen hundred years old architectural monument of Ganza Bath House in Ganza Village (Ordubad Region) is considered as one of the oldest monuments in Nakhchivan. It is located towards the North east section of Haji Huseyngulu Mosque. This religious monument was built by Haji Huseyngulu and belonged to the bath houses group of buildings.

When I visited this monument in late 2014, observed that the entrance to the bath house was on the North east side, the building was 22.6 meters in length, 9.4 meters in width and the total height was 5.6 meters. The 213 square meters bath house consisted of a cloak room and bathing with subsidiary rooms joined by two domes. The cloak rooms are joined by other corridors and little verandas. A pond with hot water was built near the bathing room. In ancient times the water was delivered to the pond by means of ceramic pipes from the mountains, it was filtered into a water tank, warmed up and reached the bathhouse and every pond. Visitors in the bath house would take hot water from the pond running into the bathing room and cold water from other tubes. Underneath the bathing room and adjacent rooms there are installed special heating channels. The bath-house had three smoke channels. Some of the differences that characterize this building were that the walls, dome and spanned ceilings have been built by stones. One of them is over the furnace to the south of bathing room; the other two are in the north of the bathing room.

The difference between these bathing houses from the ones of the Middle Ages is that the walls, dome and spanned ceilings of this have been built of stones. The inner ambience of the bath house is enlightened by smoke ducts installed in the dome and in the center of the spanning ceilings. Under the floor passed the tubes that were used to heat the water in the pond.

The architecture style belongs to Ajami who is the author of the geometric and semi geometric structures with glazed ornaments that are a breathtaking tradition that contribute towards strengthening the architecture heritage of Azerbaijan.

Gulustan tomb, located left to Aras River, is surrounded by pastures that once were ancient settlement buildings that unfortunately all have been destroyed. At the present there are the remnants of the walls hit by mortar in some places. One of them is 48 meters in length and 45 meters in width. During the excavations one can find glazed and unglazed ceramic items burned in pink color. The glazed archeological artifacts are a characteristic for the developed period of the Middle Ages. Based on the archeological discoveries, Gulustan tomb settlement has been established during the period of X-XIV centuries.

Gulustan Bridge or the ZIYA – UI MULK bridge, located over the Aras River, continues to be an important landmark in understanding the culture and architectural accomplishments of the Silk road era, well as remarkable complexities that Nakhchivan’s architects have applied over the centuries; these dynamic characteristics deserve a greater attention by UNESCO and other international organizations that address the preservation of cultural, archeological and ancient architecture monuments of the World. The region of Nakhchivan within the context of Azerbaijan’s wealth in cultural and architectural landmarks, has earned a special place due to its strategic location and its magnificent contribution towards adding important new perspectives in the study of world history.

The Ziya-UI Mulk Bridge was built of hewed stones where the Aras River was weaving, rubbing through the edges of the mountain base near Julfa. By establishing a bridge, the important role of an ancient city – the ruins of which are easily observed until today – that has became the center stage of the Silk Way. The bridge was very strong, had a very beautiful presence with two larger and ascending spans. On both sides of the higher bridge there was a door of stone. One of the spans was used as a caravan station. Construction techniques of this bridge continue to be admired by today’s international architects. At the present there are only five support structures of the bridge; all supports are in bad condition with the exception of the first column.

Stones of other columns are found in the area, a step bearing four lines of round shaped spaces is found, it is very likely that these structures were holding wood frames that helped support the area from river erosion, such hollows are seen in other sections of the bridge. In the section of bridge support, facing the river there are the remnants of a bid door divided into three parts with thin and high partitions as well as in the second support section inside the river there are three partitions. The wall remnants are the very same ones that were described in the works of Ali Yazdin, a middle ages historian who has extensively written about the Autonomous Republic of Nakhchivan. According to the Encyclopedia of Nakhchivan Monuments: “Lime solution and the rosy sandstone were used as the main construction materials in building the mosque, in different parts of the construction site, square angled bricks laying are still visible, which are a characteristic of this highly productive period. In 1386 Amir Teymur came to Nakhchivan from Marand and Zar Valley while using the connection established through this bridge. The remnants of ZIYA-UI MULK Bridge are called by the locals as the Bridge of Alexander. According to Hamdullah Gazvini, a XIV century historian, in his work “Nuzhat Algulub” (Entertainment of Hearts) asserts that the bridge was built by Ziya-Ul Mulk Nakhchivani, however there is no information about life and activity of this architect.

Gulustan Tomb, built in the Middle Ages, near Gulustan Village in Julfa region, was built under the influence of Momuna Khatun Tomb at the beginning of the XIII Century; it is included in the collection of tower shaped tombs of Azerbaijan. This unique piece of architecture was built of red sand stones, but it rostrum with original structure (cubic formed corners) built by hewed stones. Contrary to the other tombs in Azerbaijan, the vault of Gulustan tomb is situated above ground. The rostrum consists of section pyramid outside but cylindrical structure inside.

The upper pyramid section in plan turns into twelve angles and another chamber is built above. Due to their special importance, the government of Nakhchivan has recently decided to renovate the historic sites and monuments in Julfa region. The upper cover of the tomb was completely destroyed; unfortunately it is very difficult to ascertain the pyramidal cover of the tomb. As we have seen in other tombs designed by Ajami Nakhchivani, the Gulustan tomb has the same geometric designs that are present in other medieval tombs; according to the Nakhchivan Monuments Encyclopedia “there are three systematically repeated geometric designs in [in the upper-outer sides]. The body part joining with the bottom as well as the point of passage to the tower has been encircled with a belt of stalactite form. The structure of the Gulustan Tomb is unique, breathtaking and inspires many scholars who are keen to observe an exemplary structure where the square bottom section emerges as a perfect circle towards the upper section, from a cubic shape to a perfect conic base.

Gulustan Tomb is a living proof of the cultural unity between the ancient tribes of Azerbaijan and the Seljuq Empire during the XI-XIII centuries. Hope remains high in order for UNESCO to pay more attention and grand proper recognition to historic Nakhchivan, a remarkable landmark in order to further understand the life and works of human architecture and European culture.