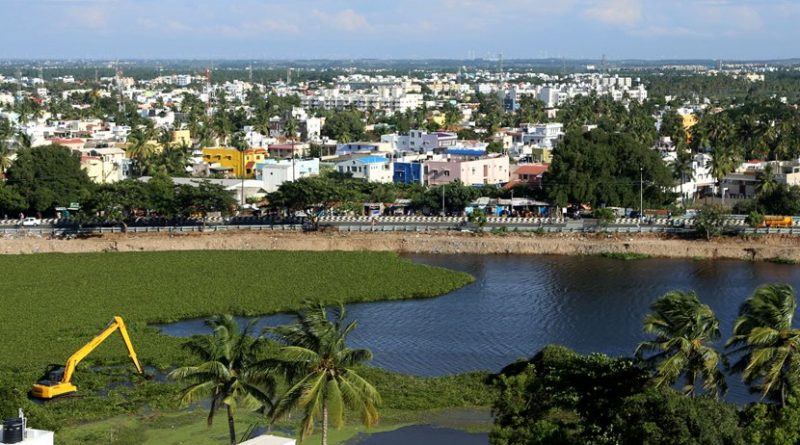 At the beginning of October, the project “Smart Water Future India”, funded by the German Federal Environment Ministry from the Export Initiative Environmental Technologies, was launched.

The aim of the project, which is coordinated by the Fraunhofer Institute for Interfacial Engineering and Biotechnology IGB, is to develop a concept for intelligent water management for Coimbatore in southern India, a city with more than one million inhabitants. In doing so, it should be indicated how India’s booming metropolises can be supported with the help of German water and wastewater technologies.

India’s economy is booming. As a result of this, the people of this predominantly rural emerging economy are increasingly moving to the economically important conurbations. While in 2016 about one third of India’s 1.31 billion people lived in cities, the urban population will grow by another 400 million by 2050, according to forecasts by the United Nations. However, the expansion of urban infrastructure in the country with the second largest population in the world is already barely keeping up with the rapid pace of urbanization. Housing is scarce, public transport is hopelessly congested at peak times, and the city’s power supply system is collapsing more and more frequently due to high demand.

Furthermore, India’s metropolises are also struggling in particular with the lack of an adequate water supply and the disposal of wastewater. In many places the supply of drinking water is limited to a few hours a day, and many districts are not yet connected to the water supply network. Similarly, many urban areas lack sewage systems and sewage treatment plants. Wastewater is therefore discharged untreated into rivers and lakes, which simultaneously provide drinking water for the municipal water supply system.

With intelligent concepts for the water innovation hub

“Smart Water Future India”, a project coordinated by the Fraunhofer Institute for Interfacial Engineering and Biotechnology IGB and funded by the German Federal Ministry for the Environment, Nature Conservation, Building and Nuclear Safety since the beginning of October, aims to develop intelligent solutions for making rapidly developing cities more livable, efficient and environmentally friendly. A concept for the sustainable water management of an intelligently networked city is to be developed using the example of the southern Indian metropolis of Coimbatore, a traffic junction in the state of Tamil Nadu.

The core of the new approach is to look at urban development challenges not only separately from traditional sectors. Dr. Marius Mohr, water expert at Fraunhofer IGB and coordinator of the project, explains: “Instead, solutions for the water supply, energy supply and food safety are to be developed across the board and intelligently networked in order to reduce competition for resources, according to the nexus water-energy-food-approach.” For the requirements analysis, the project is based on the “Morgenstadt City Lab” methodology developed within the framework of the Fraunhofer Morgenstadt Initiative, which Mohr has already successfully applied in the Georgian capital of Tbilisi.

Specific recommendations for action should show urban decision-makers how they can sustainably improve the water supply and wastewater disposal situation. Ultimately, the environment also benefits from these measures – through the reduced consumption of resources and the relief of groundwater and surface waters.

At the same time, the project can help German companies in the water sector to gain access to the huge Indian market for water and wastewater management. Although the study being implemented without any preconceived notions as to the results and is solely based on demand in India, the aim of the project is to pave the way for long-term partnerships between German companies and the Indian water industry – also beyond the end of the project. Above all, small and medium-sized companies in the German water sector can therefore benefit from the network, which is to establish a “water innovation hub” in Coimbatore.

With 1.7 million inhabitants in an area of 257 square kilometers, Coimbatore is one of the over 50 typical industrial cities with more than a million inhabitants. There are currently around 50,000 households in Coimbatore that are not connected to the water infrastructure or power supply network. It is estimated that the population of the South Indian city will grow by another million people over the next 30 years. Securing the water supply and wastewater disposal is one of the most urgent problems: Here too, the water supply can only be maintained for a few hours a day. Not even 40 percent of the wastewater is discharged via a central sewer system. Coimbatore is one of the three “Smart Cities” in India supported by Germany (see info box).

The project “Smart Water Future India” is being funded from October 2017 to March 2019 as part of the Export Initiative “Environmental Technologies” of the German Federal Ministry for the Environment, Nature Conservation, Building and Nuclear Safety. In addition to Fraunhofer IGB, project partners include the Stuttgart-based consulting and planning company Drees & Sommer Advanced Building Technologies GmbH, the ISOE – Institute for Social-Ecological Research in Frankfurt am Main and the Cologne-based trAIDe GmbH – partners for the initiation of international business contacts.

With this program launched in 2015 by the Indian government, new technologies and investments in a continuous water and electricity supply, a functioning public transport system and better educational opportunities are intended to create efficient, sustainable and livable urban areas.

Within the framework of the German-Indian cooperation, Germany is supporting three of these Indian cities, including Coimbatore, in implementing their Smart City plans. The city of Coimbatore aims to collect and treat all wastewater by 2045. During this process, 70 percent of the water is to be reused, including the use of rainwater.