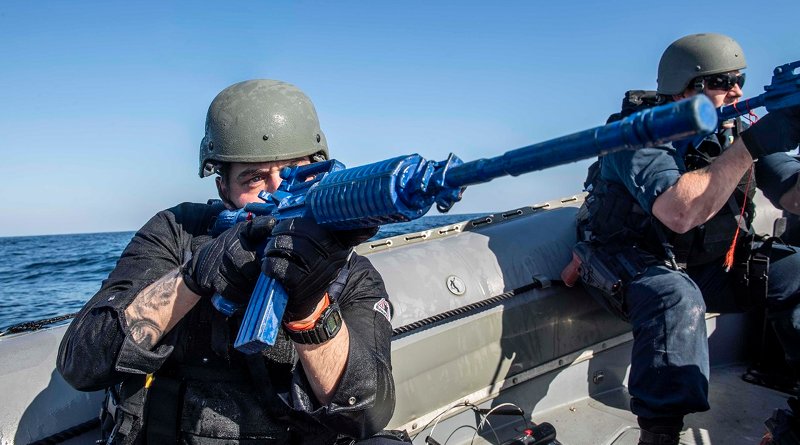 Freedom of navigation by air and by sea is important globally, including in the South China Sea, where trillions of dollars in commerce transit each year, he said.

However, over the years, China has been militarizing islands in the South China Sea and has increased its capability there, he said.

Now, China wants to come up with a code of conduct between it and the Association of Southeast Asian Nations for operating in those waters, he said.

ASEAN is a group of nations in Southeast Asia that promotes economic, political, and security cooperation among its 10 members: Brunei, Cambodia, Indonesia, Laos, Malaysia, Myanmar, the Philippines, Singapore, Thailand and Vietnam.

Davidson urged ASEAN nations to ensure such an agreement, if reached, does not restrict their freedom of navigation and limit their ability to operate there for commerce and exercises.

The admiral said ASEAN nations have been assured that the U.S. and its allies and partners will support their right of freedom of navigation.

Canada, New Zealand, Australia, Japan and India have all sailed through those waters and participated in military exercises there, he noted.

As well, navigation in those waters will pick up as the U.S. continues to rotate its forces through Singapore and projects air and sea power from bases in Japan, he added.

Davidson then discussed a wider threat from China.

China is expanding its military presence beyond the South China Sea, Davidson said. They are now operating globally, to include areas around South America, Europe and Africa.

They are also developing and fielding advanced ballistic missiles and hypersonics.

In response, the U.S. is ramping up its missile defense systems and is developing long-range precision fires as a deterrence measure, he said.

Davidson concluded that ”freedom and support of the international order is worth defending.”

The western United States has experienced such intense droughts over the past decade that technical descriptions are becoming inadequate. In