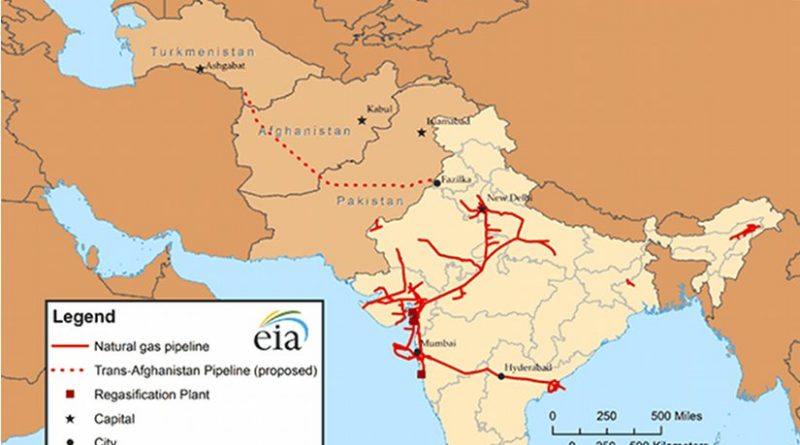 In the last one month, two significant developments have brought the TAPI project back into the lime light. Reportedly, Dragon Oil evinced interest in participating in the TAPI project’s pipeline construction1. This is a major breakthrough for this ambitious, multilateral project that was facing the prospect of a silent burial a few months ago due to the absence of any leader for the consortium. But with Dragon Oil’s participation, construction of the proposed project can be expected to move ahead with full speed2.

Following closely on the heels of this development, the four nations who have invested in the project participated in a ground-breaking ceremony in Ashgabat to commence pipeline construction3. But, despite the progress made in the last few weeks, the project still faces certain commercial constraints that have the potential to stall the pipeline construction. Foremost among these revolves around gas pricing concerns, primarily of India and Pakistan.

As per recent reports in The Economic Times on November 9, 2015, India apparently is not happy about the unit price of gas quoted by Turkmenistan and is hoping to re-negotiate the issue4. Couple of years ago, similar concerns associated with gas prices for TAPI pipeline project were echoed by the Sustainable Development Policy Institute, an Islamabad based think tank5. It will be interesting to see how the Turkmen government responds to this fresh Indian move on gas price negotiations. For the continued sustenance of this project, it would be imperative for the Turkmen government to show some degree of flexibility on gas pricing. If that does not happen, it will perhaps force India to reconsider its participation in the project.

The reasons are quite simple. Recent geo-political developments in India’s neighbourhood have come as a blessing in disguise for its energy diplomacy. Such improved circumstances in India’s neighbourhood imply that it has multiple alternatives to source its gas supplies6. It has been argued that as a result of US-Iran deal on nuclear issues, India should look towards Iran for satiating its natural gas demand from Iran through a deep sea pipeline7. Hence some of the stalled energy projects, whose fate seemed to have been sealed earlier, may receive renewed attention from policy planners in New Delhi.

With India being relatively immune to external geopolitical pressure, the sole factor that might influence its decision making in joining natural gas projects will be commercial considerations. In the last one year quite a few energy options have opened up for India. For example, the LNG deal with Australia, opening of Iran’s energy sector and prospects of shale gas imports from United States are some options that have the potential to satisfy India’s gas demand in the coming years.

What these options have essentially done is infuse an element of comfort into natural gas decision making in India, providing options that suit its commercial interests. This also means that certain projects which were signed earlier primarily based on geopolitical constraints and relatively limited natural gas supply sources globally may perhaps be re-visited. The current Indian effort to re-negotiate gas prices must therefore be seen in this context.

So the ball is now in Turkmenistan’s court. The Turkmens will be faced with an option to either show flexibility on gas pricing or continue to insist on current prices. If they do not show flexibility on gas price negotiations, then it would compel India and other major consumers to take a fresh look at their participation in the project. Such a development will have serious consequences for Turkmenistan’s gas export policy and in turn its economy.

As reported in the press, Turkmenistan which currently relies on Chinese markets for its gas exports, sees the TAPI project as an opportunity to sell its gas to South Asia8. So if the project doesn’t take off, it will force Turkmenistan to remain dependent on China. Can Turkmenistan afford dependency on China? To cite the example of Myanmar, Bertil Lintner observed that over-dependence on China posed serious political and social challenges for the military-led government in Myanmar9. If one goes by this experience, then continued dependence on China will also not augur well for the Turkmen government in the long run. Hence, to avoid this, it will be imperative for Turkmenistan’s government to demonstrate some flexibility on commercial issues.

On its part it will also be pertinent for the Indian government to handle the situation delicately. At no point of time should the Turkmens be pushed to the wall during gas pricing negotiations. Noted scholar Michael Tanchum argues that the TAPI pipeline provides India with substantial strategic presence in Central Asia10. Therefore, it would be practical for India to overlook certain commercial constraints for larger strategic goals in Central Asia.

At this juncture India needs to make up its mind on whether it would be ready to commit itself to the project in the event of Turkmenistan’s refusal to accommodate India’s concerns on gas pricing. In the meantime, India must do its own bit. As has been argued earlier, it would imperative for New Delhi to ensure timely implementation of investment commitments promised by Prime Minister Modi during his trip to Ashgabat11. This will go a long way in strengthening its position vis-à-vis Turkmenistan while negotiating on gas pricing issues. The sustenance of the TAPI project would be contingent upon each side’s ability to accommodate the concerns of different stakeholders in the project. Only time will tell if the projects’ stakeholders can demonstrate such an attitude. It is indeed necessary for them to overcome the minor constraints and see the gains to be made from the fruition of the project.

*The writer is a PhD Scholar at National Institute of Advanced Studies, Bangalore

Originally published by Institute for Defence Studies and Analyses (www.idsa.in) at http://www.idsa.in/idsacomments/key-to-tapis-success_skulkarni_231215

One thought on “Flexibility From Participating Nations: Key To TAPI’s Success – Analysis”