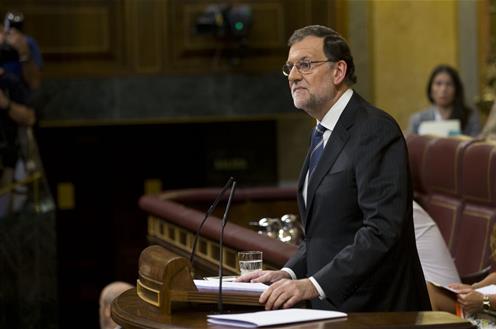 During a speech at Moncloa Palace in which he assessed the regional elections held on Thursday in Catalonia, Spain’s Prime Minister Mariano Rajoy said that he trusts this will lead to a period in the region which is based on cooperation and the recognition of plurality leading to certainty. Additionally, Rajoy stressed that he has no intention to call early general elections and that he will try to ensure that “the legislature concludes as and when scheduled, which will be in mid-2020”.

“A legislature lasts for four years because people cannot be constantly forced to vote over and over again,” Rajoy said.

In Rajoy’s opinion, “the Government of Spain is governing calmly, with the economic recovery consolidating itself and jobs being created”.

Rajoy stressed that the regional elections, “once the principle of legality had been restored”, were held with all the proper guarantees and the involvement of all political parties. Furthermore, the day unfolded “with normality and calm”, while the legal representatives and authorised officials were able to fulfil the duties allocated to them by law.

Rajoy also pointed to the high turnout, “a reflection of the civic response from the people of Catalonia to the existing political situation and the future challenges now facing Catalonia”.

As for the result, Rajoy congratulated Inés Arrimadas and her party, “which has won the elections in terms of both the number of seats and the number of votes”. He went on to add that the downside is that “those of us who wanted change have not obtained enough seats to implement those changes”.

Rajoy said he believes that the results show that “Catalonia is not monolithic but in fact plural, and we should all encourage this plurality as a virtue and source of wealth”. Repairing the cracks caused by radical attitudes in Catalan society will take time and “should be the first obligation for all political stakeholders”, he said. This “reconciliation” should be sought “hand-in-hand with the law and a respect for the rights of all, both majorities and minorities.”

Rajoy called on the political parties of Catalonia to offer “solutions which provide governability”. He also trusts that this marks the beginning of a period in Catalonia “based on dialogue and not confrontation, on cooperation and not on imposition, on plurality and not on unilaterality.”

Rajoy said that Article 155 of the Spanish Constitution was applied in Catalonia reasonably, prudently and intelligently, in consensus with a majority of the Upper House of Parliament, majority support from the political parties and European backing.

Rajoy argued that it was triggered in light of “an exceptional situation, and that exceptional situations in a democracy should be short-lived”. In this regard, he justified the calling of snap elections “with the fundamental goal, which was indeed achieved, of restoring legality”.

When asked about the withdrawal of these measures, Rajoy replied that they will cease to apply on the date set by the Upper House of Parliament; in other words, when there is a new regional government in place in Catalonia.”

He stressed that the Government of Spain offers “its full collaboration and greatest willingness to engage in constructive, open and realistic dialogue, provided that this falls within the framework of the law, to whatever regional government is formed now in Catalonia with a view to resolving the problems of the Catalan people and building a framework of certainty and security”. He said that this will be the only possible way to maintain growth and job creation in Catalonia, recover the investments and companies lost, and improve “the wellbeing and wealth of the people, which, at the end of the day, must be the goal for any government worth its salt”.