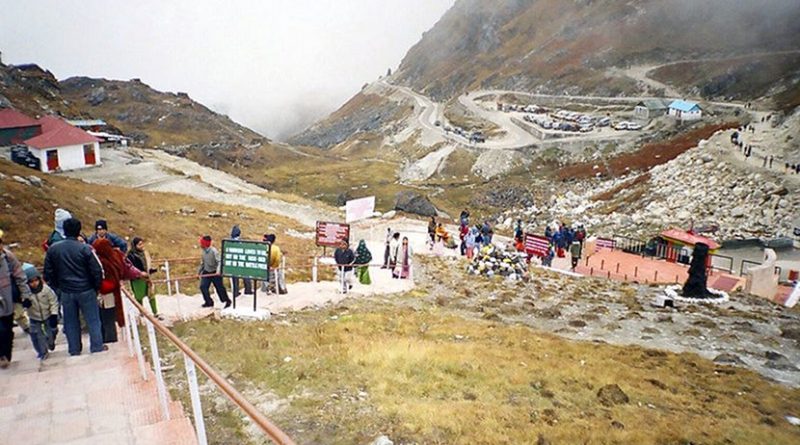 Stairs leading to the Nathu La Pass from the Indian side, and near Doklam. Credit: Wikimedia Commons.

China has done little in reducing the earlier tensions of Doklam, while India has taken no action, other than protecting its national security concerns. Doklam is likely to again become a spoilsport between the two nations.

Doklam was in the news for almost three months this year, until the standoff concluded in August. In recent days, it is back again, with reports of Chinese enhancing its activities in the area close to Doklam plateau, including construction of buildings, gun emplacements and enhancing its deployment in the region. Speculations are ripe on possible Chinese intent, including recommencing road construction or resorting to offensive actions. These speculations are based on the analysis of satellite images of the region.

The recent meeting between Indian External Affairs Minister Sushma Swaraj and her Chinese counterpart, Wang Yi, in Delhi, underlined the fact that Doklam ‘severely tested’ the bilateral relationship between the two countries. They accepted that its peaceful resolution avoided a major confrontation. It also brought home the fact that there is lack of mutual trust between the two nations, which should be amended.

Resolving this complex issue may be the agenda of the next round of talks between Indian NSA Ajit Doval and the Chinese Special Representative. Recent press statements indicate India’s unwillingness to separate Doklam from border talks, which China desires. The distance between the two nations has also increased in recent times as China has become more assertive in its territorial claims with all its neighbours and India has indicated its intent on not backing down from what it considers as being against its national security. Hence enhancing confidence building measures between the two nations becomes all the more important.

There are other issues which also add to differences between the two countries. These include the Chinese veto on Hafiz Saeed, its unwillingness to change its stance on India’s entry into the NSG and Indian reluctance to join the BRI, including claiming that the CPEC flows through disputed territory. The growing trade deficit is also a matter of concern for India. Indian growing proximity to the US, supplying military hardware to Vietnam and continued Chinese support to Pakistan, adds to the distrust. However, it is Doklam which has again come into the limelight as a possible flashpoint.

China has done little in reducing the earlier tensions of Doklam, while India has taken no action, other than protecting its national security concerns. Doklam is likely to again become a spoilsport between the two nations. Winters are severe in the area and hence little offensive action could be expected during this period. However, this sudden interest by China, enhancing its troop density, building infrastructure and increasing its firepower resources in the region has been raising eyebrows in Indian strategic circles.

The questions being debated include likely Chinese intent in the region of reigniting the Doklam fire or pressurising Bhutan to dump India in its favour. China has presently confined all its activities to the region under its control and has not commenced any offensive action to provoke India. Will it take another step to provoke India or only hold its own area in strength to continue to apply pressure on India? Most importantly, even if Doklam reoccurs, it may again be a localised action, rather than an across the Line of Actual Control (LAC) action, spread along the front.

Doklam was closely monitored by all nations of the region with varying intent. Bangladesh, Sri Lanka and Nepal were observing Indian support to Bhutan and its determination to withstand a belligerent China. Other nations in Southeast Asia were observing Chinese reactions, as a possible lesson to resolving their own border disputes in the future. Hence, both countries needed to hold onto their stance, for ensuring their international stature and reputation.

Satellite images do not indicate any enhanced force levels across the LAC, other than Doklam. Hence, any action by China is aimed at being a localised action, likely to offset its decision to withdraw prior to the BRICS summit in August. China has never repeated an action, and hence it may not recommence road construction. It may attempt something different. This would be aimed at countering Indian defensive advantage as also to offset any counteraction by India.

It may adopt options including nibbling disputed Bhutanese territory, which India would not be able to officially counter, akin to its actions in Doklam, thus pushing Bhutan to seek talks, moving them into the Chinese fold. This would, over time, reduce Indian control and support to Bhutan. It could also commence employing the Doklam plateau as a training ground, increasing force presence in the region, denying India the ability to counter. Regular movement of vehicles in the region would create tracks, which could be converted to a road at an earliest opportunity.

It could also aim at enhancing the quantity and quality of patrols to regions it claims as its own, including those under dispute. These as a sign of assertiveness would be countered by India, but would provide them with the advantage as they have taken the first step. India has no claims beyond the watershed, hence would remain on the defensive.

The infrastructure that it is creating in the Doklam region would always be to its advantage in future operations, an action which should compel India to re-evaluate its defensive strategy, its existing deployment and infrastructure development. China historically has never easily backed down and is unlikely to especially when it has increased its assertiveness. It was compelled to this time for political reasons, but unlikely every time.

Tensions and disagreements, despite a series of meetings, may not end soon. India needs to be wary of  wargame options China may adopt, from the advantage it has gained by enhancing force levels and infrastructure in Doklam and be prepared with contingency plans. India should also realise that the possibility of China repeating its earlier mistake of undertaking an activity, which could be easily countered by India, is unlikely and hence may attempt something different.

Home » What Could The Chinese Be Planning For Doklam? – Analysis

2 thoughts on “What Could The Chinese Be Planning For Doklam? – Analysis”