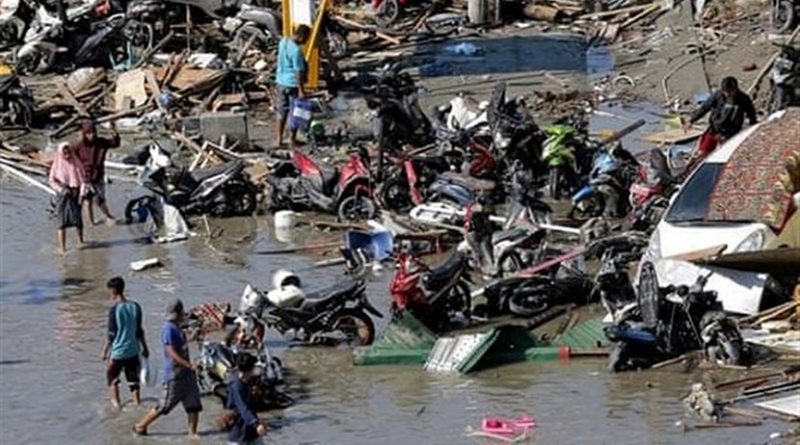 The tsunami that struck the Indonesian islands of Java and Sumatra late on Saturday has so far claimed 222 lives, injured 843 people and damaged hundreds of buildings. It was thought to have been caused by undersea landslides following the Mount Anak Krakatau volcanic eruption in Sunda Strait, between the two islands.

Indonesian social media was abuzz with criticism toward the country’s official response for downplaying initial reports of a tsunami.

The Meteorology, Climatology and Geophysics Agency (BMKG) tweeted on Saturday night that the waves which hit coastal areas on both sides of the strait were high tidal waves caused by the full moon. It advised people to stay calm and ended its tweet with a sunglasses emoji.

It revised the tweet shortly afterwards and announced that the agency had not recorded any seismic activities that could have triggered a tsunami. It also acknowledged that the emoji on its previous tweet was inappropriate.

The spokesman for the National Disaster Mitigation Agency (BNPB), Sutopo Purwo Nugroho, who has become a reliable source for the series of disasters that have hit Indonesia, announced shortly after midnight on Sunday that tidal waves had swamped beaches in Lampung province on the southern tip of Sumatra and in Banten on the western coast of Java.

BMKG head Dwikorita Karnawati said in an early morning, televised press conference said the agency’s tide gauges detected a rise on the sea level but could not immediately determine whether it was a tsunami and needed more time to analyze it.

“Further analysis showed that the wave was indeed a tsunami. The pattern of the waves were similar to that in Palu,” Karnawati said, referring to the tsunami triggered by undersea landslide that followed a 7.5 magnitude earthquake and hit Palu and its neighboring districts on Sept 28. The BMKG was also under fire for lifting its tsunami early warning too early following the Palu earthquake.

BNPB’s Nugroho has since apologized for the error in his earlier announcement which stated that the wave was only tidal surge waves instead of a tsunami, saying that BNPB based its announcement on the BMKG’s analysis.

No tsunami warning was issued as the result of the confusion on the agencies’ initial assessment. The BMKG said that, based on the geology agency’s record, the eruption occurred at 9.03pm on Saturday, and the tsunami hit coastal areas in Lampung and Banten at 9.27pm. The authorities have not provided information on the height of the waves.

The worst hit area was the Pandeglang district of Banten, where popular beach resorts were packed with holiday-goers spending the Christmas and New Year holiday season. The western Java transmission unit of the state electricity company, PLN, was having a staff and family outing at one resort and had hired a band called Seventeen. Video footage showed the wave crashing over the stage as the band performed. The band said it had lost its bassist, guitarist and road manager, and that other members, including the wife of the singer, were still unaccounted for.

Nugroho said 164 people were killed in the district, with 446 houses, nine hotels, 350 vessels and boats and 73 vehicles badly damaged.

“This is a lesson for us because we don’t have early warning system for tsunami triggered by undersea landslides or volcanic activities,” Nugroho said.

The Mount Anak Krakatau volcano is a new volcano that began to form in 1927 in the caldera of Krakatau, decades after that volcano’s major eruption in 1883 that triggered a mega tsunami and killed about 36,000 people in the then Dutch Indies. The sound of its eruption was heard as far as the western part of Australia and its volcanic ash drifted as far as Europe.

The volcano, which is one of the 127 active volcanoes that dot the Indonesian archipelago, has continued to form and its activity has increased its height by 4 to 6 meters every year, Nugroho said.