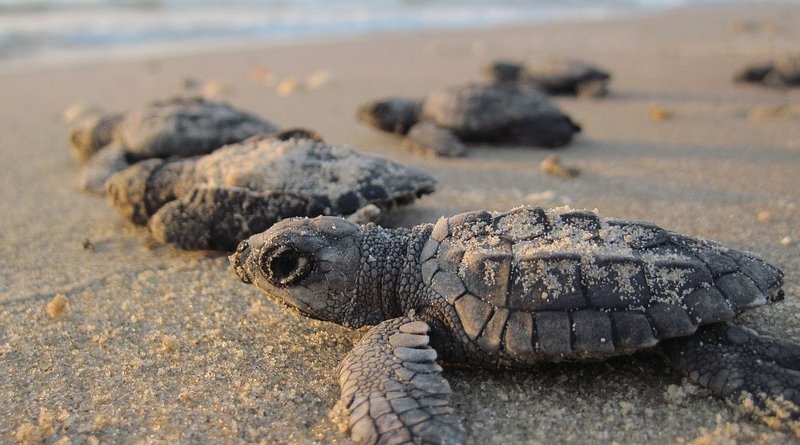 A team of Florida researchers and their collaborators created a first-of-its-kind computer model that tracks where sea turtle hatchlings go after they leave Florida’s shores, giving scientists a new tool to figure out where young turtles spend their “lost years.”

“The model gives community groups, scientists, nonprofit agencies and governments across borders a tool to help inform conservation efforts and guide policies to protect sea turtle species and balance the needs of fisheries and other human activity,” Putman said.

The team’s simulation model and findings were published this week in the online journal Ecography.

The model is built to predict loggerhead, green turtle and Kemp’s ridley abundance, according to the authors. To create the model, the team looked at ocean circulation data over the past 30 years. These data are known to be reliable and routinely used by National Ocean and Atmospheric Administration and other agencies.

The team also used sea turtle nesting and stranding data from various sources along the Caribbean, Gulf of Mexico and Florida coasts. The dataset includes more than 30 years of information from UCF, which has been monitoring sea turtle nests in east Central Florida since the late 1970s. Mansfield, Seney and Putman previously worked together on other sea turtle studies in the Gulf of Mexico.

“The combination of big data is what made this computer model so robust, reliable and powerful,” Putman said.

The group used U.S. and Mexico stranding data–information about where sea turtles washed ashore for a variety of reasons–to check if the computer model was accurate, Putman said. The model also accounts for hurricanes and their impact on the ocean, but it does not take into consideration manmade threats such as the 2010 Deepwater Horizon oil spill in the Gulf of Mexico, which occurred during the years analyzed in the study.

The computer model also predicts where the turtles go during their “lost years” – a period after the turtles break free from their eggs on the shoreline and head into the ocean in the Gulf of Mexico and northwest Atlantic. The turtles spend years among sargassum in the ocean, and any data about that time is scarce. Better data exist when they are larger juveniles and return to forage closer to coastlines. What young sea turtles do in between hatching and returned to nearshore waters takes place during what is called the “lost years” and is the foundation of sea turtle populations. Understanding where and when the youngest sea turtles go is critical to understanding the threats these young turtles may encounter, and for better predicting population trends throughout the long lives of these species, said Mansfield.

This work was supported in part by a National Academy of Sciences gulf research program grant awarded to Mansfield, Seney and Putman to synthesize available sea turtle datasets across the Gulf of Mexico.

“While localized data collection and research projects are important for understanding species’ biology, health and ecology, the turtles studied in one location typically spend different parts of their lives in other places, including migrations from offshore to inshore waters, from juvenile to adult foraging grounds, and between foraging and nesting areas,” said Seney, who helped coordinate data compilation from the multiple locations. “Our extensive collaborations on this project allowed us to study the Gulf of Mexico’s three most abundant sea turtle species and to integrate nesting beach data for distant nesting populations that ended up having close connections to the 1- to 3-year-old turtles living and stranding along various portions of the U.S. Gulf coast. Without the involvement of our Mexican and Costa Rican collaborators, a big piece of this picture would have been missing.”