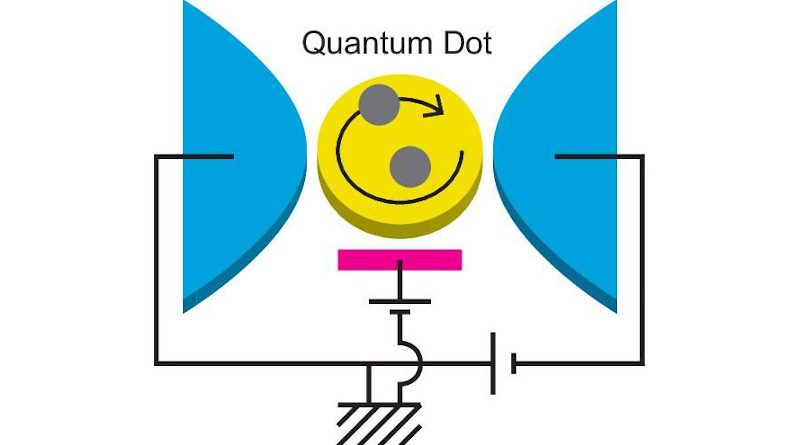 A quantum dot (the yellow part) is connected to two lead electrodes (the blue parts). Electrons tunneling into the quantum dot from the electrodes interact with each other to form a highly correlated quantum state, called "Fermi liquid." Both nonlinear electric current passing through the quantum dot and its fluctuations that appear as a noise carry important signals, which can unveil underlying physics of the quantum liquid. It is clarified that three-body correlations of the electrons evolve significantly and play essential roles in the quantum state under the external fields that break the particle-hole or time-reversal symmetry. CREDIT: Rui Sakano

nal Physical Review Letters, could be applied to further theoretical research about the physics of quantum dots, ultra-cold atomic gasses, and quarks.

At issue is ‘the Kondo effect’. This effect was first described in 1964 by Japanese theoretical physicist Jun Kondo in some magnetic materials, but now appears to happen in many other systems, including quantum dots and other nanoscale materials.

Normally, electrical resistance drops in metals as the temperature drops. But in metals containing magnetic impurities, this only happens down to a critical temperature, beyond which resistance rises with dropping temperatures.

Scientists were eventually able to show that, at very low temperatures near absolute zero, electron spins become entangled with the magnetic impurities, forming a cloud that screens their magnetism. The cloud’s shape changes with further temperature drops, leading to a rise in resistance. This same effect happens when other external ‘perturbations’, such as a voltage or magnetic field, are applied to the metal.

Teratani, Sakano and Oguri wanted to develop mathematical formulas to describe the evolution of this cloud in quantum dots and other nanoscale materials, which is not an easy task.

To describe such a complex quantum system, they started with a system at absolute zero where a well-established theoretical model, namely Fermi liquid theory, for interacting electrons is applicable. They then added a ‘correction’ that describes another aspect of the system against external perturbations. Using this technique, they wrote formulas describing electrical current and its fluctuation through quantum dots.

Their formulas indicate electrons interact within these systems in two different ways that contribute to the Kondo effect. First, two electrons collide with each other, forming well-defined quasiparticles that propagate within the Kondo cloud. More significantly, an interaction called a three-body contribution occurs. This is when two electrons combine in the presence of a third electron, causing an energy shift of quasiparticles.

“The formulas’ predictions could soon be investigated experimentally”, Oguri says. “Studies along the lines of this research have only just begun,” he adds.