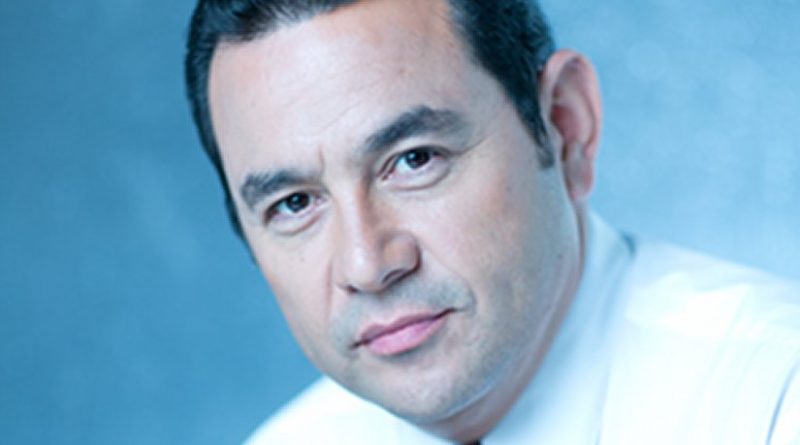 On Jan.14, Guatemala inaugurated a new president who will govern until 2020. Jimmy Morales, 46, swore to uphold the law and to govern as president with “patriotic love.” That same day, the Congress that was newly elected on September 6 also took office.

Morales, from the National Convergence Front (FCN), won the runoff election in Oct. 25 with 67 percent of the vote, while Sandra Torres, from the National Unity of Hope (UNE), received 33 percent of votes. Morales’s victory is seen as a vote of protest against widespread corruption in the country, which forced the resignation of former president Otto Perez Molina (2012-2015) on Sept. 2. Perez Molina is currently imprisoned.

“Thank you God for the privilege you have given me to serve my people,” were Morales’s first words after swearing in to office. He is a conservative and deeply religious comedian. “There is no magic. Let’s stop resigning ourselves to pessimism. A new Guatemala is possible and worthwhile.”

Morales emphasized that he will attack, with the support of the citizens, corruption and poverty — which affects nearly 60 percent of the 16.7 million people in Guatemala — as well as improve health services and education, among other policies.

“I am sure that we do not want to wake up to see the dinosaur of corruption, nor the traditional way of doing politics, or the feuds of those who make a living by dividing us Guatemalans,” added the president.

In a hearing with Morales the day after his inauguration, the Executive Secretary of the United Nations Economic Commission for Latin America and the Caribbean (ECLAC), Alicia Bárcena, suggested spearheading “a new model of economic development that promotes social inclusion and helps fight poverty.”

“This model must be based on a policy of productive transformation with technological innovation and competitiveness to create decent and quality employment, as well as on a budgetary scheme that is more flexible and allows the country to increase its tax revenue, which in 2013 represented 13 percent of Gross Domestic Product (GDP), compared with an average of 21.3 percent in Latin America and the Caribbean as a whole,” said Bárcena.

To do this, Guatemala “should boost its domestic regional development, reducing the costs of logistics, security, electricity and the Internet, while also adopting a foreign policy that integrates the areas of trade, investment, culture and politics and that reassumes leadership in regional integration processes,” she added.

ECLAC calculates that Guatemala ended 2015 with growth of 3.9 percent and estimates that this pace will hold steady in 2016, when the expansion is forecast at 4 percent.

Among the challenges Morales will face is a majority opposition in Congress, chaired by Mario Taracena Díaz Sol, of the UNE. Of the 158 representatives, the Renewed Democratic Liberty party (LIDER) — whose leader Manuel Baldizón was the favorite to win the elections but ended in third place — has the largest number of legislators (45), followed by UNE (33) and the Patriotic Party (18) of Pérez Molina. The FCN has only 11 representatives, which will force the president to negotiate with the different political forces to adopt legislative initiatives.

Human rights will also be an important issue that the new government will have to address. On Jan. 6, 13 military officers were accused of forced disappearances and other crimes against humanity. Among the accused are retired General Benedicto Lucas García, former chief of staff during the regime of his brother, the former dictator Romeo Lucas García (1978-1982), and retired Lieutenant Colonel César Augusto Cabrera Mejía, whom Morales intended to appoint Minister of Interior. According to the Public Ministry, the officers are responsible for the disappearance and death of at least 558 indigenous people in the 80s.

Additionally, on Jan. 11 the trial of former dictator Efraín Rios Montt, 89, was suspended. Montt is accused of genocide during his rule between 1982 and 1983, a time considered the bloodiest in the 36 years of armed conflict. This period ended with the signing of the peace agreements in 1996 and left more than 200,000 dead and disappeared. The court decided to suspend the trial until three writs of amparo filed by Rios Montt’s defense are resolved.

While some sectors were concerned about the presence of businessmen in the new cabinet, the head of the International Commission Against Impunity in Guatemala (CICIG), Iván Velásquez, confirmed that the cabinet members Morales appointed were analyzed by the committee, finding no inconsistencies regarding their integrity.
“President Morales asked us to review whether there was any information about some people he hoped to appoint to his government,” Velásquez said. “We worked exclusively on that, and there were no active role or suggestions of the candidates for the positions. We expressed what we knew about the people that the President submitted for consideration, and we did so with the full confidence and confidentiality as appropriate in matters of this nature.”