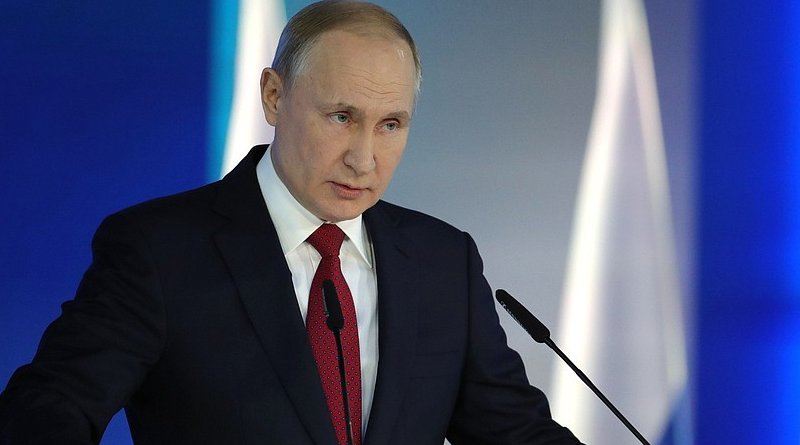 Vladimir Putin’s proposed changes to the Russian constitution portend a shift toward one-party rule and lay out a framework by which he can continue to be a major power broker well beyond the end of his presidential tenure in 2024.

On Jan 15, 2020, in his State-of-the-Nation address to the Russian political elite, Russian president Vladimir Putin proposed some major constitutional amendments, perhaps the most significant of which was a boost of power for the State Duma (Russia’s parliament). Immediately following the speech, Russian PM Dmitry Medvedev announced his resignation, as did the entire rest of the cabinet. Medvedev will move into the position of deputy chairman of Russia’s national State Council. Putin named little-known Mikhail Mishustin, 53, the head of the Federal Tax Service, to replace Medvedev as PM.

These constitutional changes mark the long-anticipated transition of power in preparation for 2024—Putin’s last year as president. With these moves, Putin is carving out significant political space for himself to occupy after the expiration of his presidential term.

These proposals, coming as they did almost a year and a half before the next parliamentary elections and well before the 2024 presidential elections, are a bit earlier than expected. Still, a move to amend the constitution has been hinted by the Russian media for the past year. The timing and careful wording of these hints pointed toward shifts in the power of the President of Russia and that of the State Duma.

A vision of post-2024 Russia had to be articulated, as such a vision is essential to ensure stability and prevent infighting among power groups for resources and important government positions. The country’s politicians, economic figures, and siloviki (politicians of a military or security background) all needed to hear this vision clearly expressed.

Through Medvedev’s resignation, Putin removed from a vital position a man who has been seen for years as predominantly a liability rather than an asset. The inefficiency of the government, alleged links to large corruption schemes (as published by Russian opposition figures), and other negatives all tainted Medvedev. His removal essentially means the end of the Putin-Medvedev tandem, which more or less successfully functioned in 2008-12 when Putin served first as PM and then as president. It also means Medvedev is now highly unlikely to serve as Putin’s successor.

One of Putin’s central propositions is to increase the State Duma’s role in the formation of the Russian government: namely, the Russian PM will be chosen by the deputies and the president will have to approve the decision. Until now that decision was made at the discretion of the president.

To a certain extent, this is a revolutionary proposition.

The 1993 Russian constitution laid out a vision for an all-powerful president. At the time of the collapse of the Soviet Union, a period of great social and economic destabilization, measures propping up presidential rights were argued to be necessary. It was under those measures that Putin assumed the presidency in 2000. He is now setting out to change this system.

Moreover, Putin essentially ruled out the possibility that any president will be able to serve more than two consecutive terms. He said he would not oppose eliminating the word “consecutive”, which would bar him from returning to the presidency himself in the 2030 elections (when he will turn 78).

For the moment, a critical question about post-2024 Russia has been answered: Putin is unlikely to stay on as president. But it opens up a new one: where will he go?

As he is bolstering the PM’s position, many believe, quite naturally, that his intention is to move into the PM’s position after 2024. Others have suggested that he might take up an altogether different position as chair of the State Council, created by Putin in 2000, which is to have its greater status enshrined in the constitution.

He might even be both, which would enable him to limit intrusions and influence from the future president.

Still, the presidency will remain a powerful political role. Putin has stated explicitly that Russia “must remain a presidential republic”.

Putin has several viable options to help him maintain a leading role after 2024. What is less clear is how power will be shared with such a political heavyweight.

Moreover, the proposed changes raise a longer-term issue. If the PM is to be approved by the State Duma, it will be troublesome for the ruling elite if opposition parties enter the legislature. That could suggest that we are witnessing not only a transition of power in Russia but a more momentous process: the slow emergence of a one-party state, with the “United Russia” party set to dominate Russian politics for years with almost no room left over for any other political entities.

Such a development would comport well with Russian history. Imperial Russia was characterized by strong leadership that left no room for political parties or constitutionally secured ministers or chancellors. The Soviet Union, too, was dominated entirely by the Communist Party.

One-party rule in China and the concomitant growth of Beijing’s global geopolitical influence could serve as a good modern example of successful one-party rule.

However, another influence could be Kazakhstan, where a power transition occurred following the March 2019 resignation of veteran leader Nursultan Nazarbayev. To ensure national stability, Nazarbayev became head of Kazakhstan’s State Council for life, thus remaining a major political influence behind the scenes.

Putin made another notable suggestion in addition to the major changes discussed above. He recommended that only those who have resided in Russia continuously for more than 25 years and who have never possessed a foreign passport or permanent residence permit be permitted to run for president.

This would be a significant development. A great many Russians reside abroad—the official figure is 543,000, but others estimate the figure at nearly 10.5 million. Many are wealthy and educated. If this change goes into effect, it would bar them from active political life in their homeland.

This is a preventive step by Putin, as most Russians abroad oppose his long rule. It also fits well into the so-called nationalization of the Russian elites—a process that sped up after the Ukraine crisis with the West and the nascent “de-Europeanization” of Russia’s geopolitical outlook.

There is an alternative interpretation of the proposed constitutional changes. Many in Russia believe the increase of the PM’s and State Duma’s powers is a positive development as it will outlive Putin. The system will thus be more efficient under future presidents, PMs, and State Dumas.

Whether that proves true or not, the proposed constitutional changes will have a lasting effect on Russia’s internal political development. Though the role of the PM and the State Duma will grow, the country is heading toward more centralized rule that will largely crowd out opposition parties. As to Putin’s future, his suggested constitutional changes point to his remaining a major power broker for Russia’s internal and foreign policies well beyond 2024.

One thought on “With Putin’s Proposed Changes, Russia Begins Its Transition To One-Party Rule – OpEd”