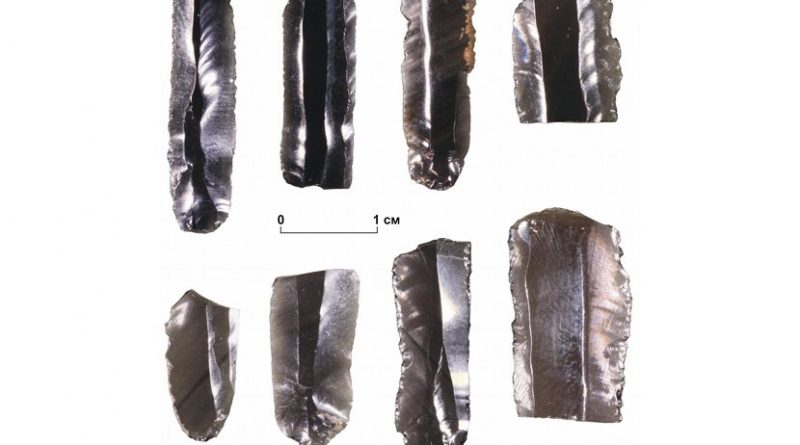 Russian scientists studied the Zhokhov site of ancient people, which is located in the high-latitude Arctic, and described in detail the way of life of the ancient people had lived there. It turned out that, despite the sparsely populated area, the ancient people had communicated with representatives of other territories and had even exchanged various objects with them through some kind of the fairs.

The Arctic is the coldest part of our planet, where there are no favorable conditions for life. The Arctic regions of the Earth are hardly populated by humans, although in some countries, including Russia, the United States and Norway, there are industrial zones. These zones increase the average population density to 0.35 people / km2 but basically it does not exceed 0.03-0.04 people / km2.

Zhokhov Island, located at 76º N in the New Siberian Islands, 440 kilometers north of the modern coast of the East Siberian Sea, belongs to the High Arcti?. It was discovered here the settlement of the ancient man, Zhokhov site, considered the earliest evidence for human habitation in the High Arctic. In the settlement that existed 9300-8600 years ago, 25-50 people lived permanently. In the remote past, Zhokhov island was a part of the vast plain formed due to drastic sea level drop during the Last Glacial maximum. Because of the post-glacial sea-level rise, this plain was flooded and eroded.

At present, Zhokhov site is located in the south-western part of the modern Zhokhov island, near the foot of a low – about 120 m – hill covering it from the severe north-west wind. This place was very convenient for the ancient people. The hill served as an observation point, and because of the proximity to the coast, they always had a supply of wood, which was brought by sea.

The scientists conducted excavations in permafrost and have already investigated a significant part of the monument – 571 square meters. In the course of work, many tools were found made of stone, bones, horns, tusks and wood. These are different tools, items of hunting weapons, details of sleds and diverse home utensils. Among the lithic artifacts there are a lot of microprismatic blades, which served as side-blades for composite tools that served as spear/dart/arrow points and knives. Most of them had been produced of various silicious rocks of local origin, while some of them were made of exotic raw materials unusual for this part of the world such as obsidian, or volcanic glass. The researchers found 79 such items. The ancient people appreciated this material for the best splitting ability among other rocks and valued its extremely thin and sharp cutting edge. This material is also highly appreciated by the researchers because each deposit of obsidian has its own unique geochemical signature, which helps finding the source of the material. Then it is possible to see how it moves through the space and thus we can learn more about the life of ancient people.

However, there is no obsidian source nearby Zhokhov Island. The closest area with such source locates near Krasnoye lake in the lower reaches of the Anadyr River in Chukotka, which is some 1,500 km in a straight line, and the actual travel easily could be more than 2,000 km. It would seem that the ancient people could not travel such a distance physically.

The authors studied the unearthed obsidian objects by the X-ray Fluorescence method. This is non-destructive examination method that allows to determine the geochemical properties of the samples and thus find the gives the way to locate the source of the material using the unique signatures.

“We found that particular obsidian type was coming to Zhokhov Island from the area of the Krasnoye Lake. This is a super long-distance travel, and it is hard to imagine that the ancient people could possibly make such trips some 9000 years ago. Most likely, they met other people at the intermediate points and exchanged products made of obsidian, or enjoyed primitive trade,” said one of the authors of the article, Vladimir Pitulko, RSF project’s principal investigator, Ph.D. in history, senior researcher at the Paleolithic Department of the Institute for the History of Material Culture, Russian Science Foundation.

The researchers also analyzed more than 54 000 faunal remains of hunting and reconstructed the yearly economic cycle of the inhabitants of the Zhokhov site. The occupants of the site were classic terrastrial hunters who practiced reindeer hunting. However, in the winter time they hunted polar bears sleeping in bear lairs. For them, that was reliable and stable way of getting food supply, because there were quite a lot of the bear dens in this area.

Previously, scientists investigated the bones of medium-sized canids; they indicate the presence of a well-formed dog that lived together with the people of Zhokhov site. In addition, these animals are similar in size and body weight to the modern breed of sled dogs. Findings of parts of sleds in the form of runners prove that the inhabitants of these territories had a well developed transport system. Thanks to that system, the inhabitants of Zhokhov site travelled to the nearby territories, which were still part of the mainland at that time, and maintained relations with their inhabitants.

Vladimir Pitulko also noted that sites in the mouths of Kolyma and Indigirka rivers could serve as the intermediate points in that trade. In this case, the distance between the exchange points was about 700 km, which is quite possible to travel in early spring by sled dogs.

Such “meetings” turned into fairs later on as the inhabitants of the north of Eastern Siberia organized them in the 18th-19th centuries, but not only for the exchange of goods. The exchange of various information was considered to be of much more importance. In any case, the material evidence on Zhokhov island is presented with a minimum of findings. Probably an important result of such meetings was the marriage contacts necessary secure biological stability of small groups of people who lead a rather isolated life.

“The results of our research indicate a high level of sociocultural relations that existed among the ancient population of the Arctic in Eastern Siberia 9000 years ago, and about the engagement of people from the Zhokhov site. These people who lived on the edge of the earth were not isolated. On the contrary, contacts within these societies were much more developed than it used to be thought,” concluded Vladimir Pitulko.