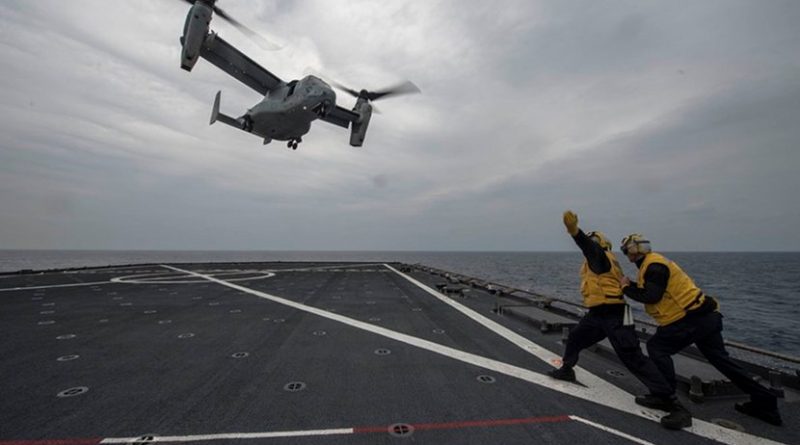 There is heightening hysteria in the U.S. regarding the ‘China threat’.  Recent controversial statements by a couple of Chinese military officers have added fuel to the fire.   https://www.businessinsider.com/south-china-sea-chinesenavy-ram-us-ships-2018-12; https://www.news.com.au/technology/innovation/military/sink-two-aircraft-carriers-chinese-admirals-chilling-recipie-to-dominate-the-south-china-sea/news-story/aaa8c33d57da62e7d5e28e791aa26e0f  .

Referring to these outbursts, one US expert has warned that in China “the language of war is creeping in”. https://www.google.com/search?q=cronin+china+threat+national+interest&rlz=1C1NHXL_enUS733US733&oq=cronin&aqs=chrome.1.6

But these particular Chinese military officers are well known for their over-the top rhetoric, and their thinking and threats are atypical.  Nevertheless, such fears and frustration are not surprising given the ‘in your face’ US policy, rhetoric and actions flaunting its dominance and essentially daring China to do something about it.

Let’s try to imagine what the situation may look like from the perspective of China’s leaders.

To them it must seem that just as China is regaining its cultural – and – national – dignity from a ‘century of humiliation’, it is being faced with a possible 21st century repeat of history. Indeed, geopolitical developments are likely seen by the general population as evidence of a grand conspiracy of Western civilization against it. It is hemmed in by US bases and rotational assets in US allies and strategic partners stretching across a wide swath of Asia from Japan and South Korea in the east to the Philippines, and Australia in the south and Singapore, Malaysia, and Thailand in the southwest.  And the U.S. is trying to make military inroads with Vietnam and India.  Worse, the U.K. is considering establishing a military base in Southeast Asia. To China’s leaders this must add to a feeling of being threatened. As one US analyst put it “from Beijing’s perspective, primary threats center on issues of sovereignty and domestic security that could question CCP legitimacy”. https://www.google.com/search?q=cronin+china+threat+national+interest&rlz=1C1NHXL_enUS733US733&oq=cronin&aqs=chrome.1.6

Indeed, Chinese leaders are sensitive to the expectations and nationalism that they have stoked with their sometimes belligerent rhetoric and promises that China will not be bullied.

From their vantage point, US rhetoric has become increasingly shrill and belligerent. It seems like it has launched a campaign of condemnation of China’s behavior and of warning others of China’s wicked intentions –in general, and in the South China Sea in particular. It has named China as a “strategic competitor” and a “revisionist” nation and declared that “a geopolitical competition between free and repressive visions of world order is taking place in the Indo-Pacific region”. https://www.whitehouse.gov/wp-content/uploads/2017/12/NSS-Final-12-18-2017-0905-2.pdf.

More ominous to them, the U.S. has proposed a rubric of a ‘Free and Open Indo-Pacific’ and is pushing for the “Quad” – a potential security arrangement among the four large democracies of India, Australia, Japan. To China this seems intended to counter its rightful rise. The US rhetoric campaign culminated in a 4 October speech by US Vice President Mike Pence criticizing China across the board and in particular for behavior in the South China Sea.  https://www.whitehouse.gov/briefings-statements/remarks-vice-president-pence-adminstrations-policy-toward-china/

Regarding the South China Sea, the U.S. has declared that it will not accept China’s militarization of man-made islands there. US National Security Advisor John Bolton has made it clear that the U.S. is preparing to build up its forces in the region and in particular its patrols in the South China Sea. https://www.straitstimes.com/asia/se-asia/duterte-says-china-already-in-possession-of-south-china-sea-tells-us-to-end-military

Indeed, on 12 February Phil Davidson, the Indo-Pacific Commander told a US Senate panel that “Pacific forces_ _ are being repositioned to better respond to conflicts_ _ in the South China Sea”.  https://freebeacon.com/national-security/u-s-bolstering-pacific-military-forces-to-counter-massive-beijing-buildup/

Implementing this apparent shift in policy emphasis, the U.S. has already increased the frequency and aggressiveness of its FONOPs there. To some Chinese military leaders , this may appear to be the U.S. flaunting its superior military power and daring China to take the political and military risk of confrontation and possible conflict. The U.K.—at US urging– has also undertaken a FONOP targeting China’s claims and may be planning more. https://www.cnbc.com/2019/02/11/uk-to-send-new-aircraft-carrier-loaded-with-f35-jets-into-south-china-sea.html Australia is apparently considering launching its own. The recent “unsafe” and “unprofessional” confrontation and near collision https://www.foxnews.com/us/chinese-destroyer-made-unsafe-and-unprofessional-move-toward-uss-decatur-in-south-china-sea-official-says  between a Chinese warship and the US warship Decatur while it was executing a FONOP may be China’s response to what it sees as a growing conspiracy of maritime powers against it.

Reinforcing their notion of a ‘US threat’, the U.S. has stepped up its naval transits of the Taiwan Straits – – an anathema to China’s leaders. Moreover, its “continuous bomber presence missions” deploying nuclear capable aircraft over the South China Sea must appear to China to be a clear and continuous threat. https://www.airforcetimes.com/news/your-air-force/2018/06/06/us-b-52s-again-fly-in-contested-airspace-of-south-china-sea-claims/

Now that the U.S. has withdrawn from its Intermediate Range Nuclear Forces treaty with Russia, China probably expects that it will deploy such missiles into the western Pacific thus counterbalancing its own mid -range missiles—the so-called aircraft carrier killers. https://www.thehindu.com/opinion/op-ed/irking-the-dragon/article26206709.ece

Likely even more worrying to China’s military leaders, is the increasing overall US strategic nuclear threat.  China has built a new submarine base at Yulin on Hainan in the South China Sea for its nuclear armed submarines. These are its deterrent of a first nuclear strike against it.  China sees intelligence, surveillance and reconnaissance probes in China’s ‘near seas’ as designed in part to detect, track and if necessary target these submarines thus diminishing its deterrent and exposing China to nuclear intimidation.

China’s leaders must have observed that over the past few years, bashing China has become quite common in the U.S. foreign policy community—even for some supposed objective and balanced think tanks, analysts and opinion writers for the media.   More recently, the opprobrium and prescriptions by pundits has become more strident, in some instances bordering on ‘yellow journalism’—which in the past has prodded the U.S. into war. https://www.wsj.com/articles/america-cant-afford-to-cede-the-seas-1526338043.

Indeed, some have tried to goad the U.S. into action which could lead to war over the tiny indefensible features in the South China Sea even though there is no threat to a US core security interest. A case in point is a recently posted piece in “War on the Rocks” by Ryan Martinson and Andrew Erickson of the US Naval War College that urges the U.S. to “re-orient” its sea power to challenge China in the South and East China Seas . https://warontherocks.com/2018/05/re-orienting-american-sea-power-for-the-china-challenge/.

China’s leaders would likely feel compelled by their body politic and their own rhetoric to meet such a challenge in kind.

But as retired Admiral Michael Mcdevitt of the Center for Naval Analysis has asked rhetorically  about China’s action in the South China Sea,  “What vital US interest has been compromised?  Shipping continues uninterrupted, the US continues to ignore_ _ their requirement for prior approval, our MDT with Manila remains in force_ _ “. https://www.cna.org/news/south-china-sea ;”https://ippreview.com/index.php/Blog/single/id/600.html   Chinese military leaders and strategists probably think the hyped false US concern with protecting the sea lanes of the South China Sea is just part of a fundamental strategy of constraint, containment and ultimately confrontation.

China’s leaders know that it is militarily inferior to the U.S. So they are using a whole-of- government approach to combat what they see as the US threat to prevent China  from fulfilling its deserved destiny. In the military sphere, they are trying to give the impression that if there is a military confrontation in the South China Sea, the U.S. will suffer grievous and politically unsustainable losses – – regardless of the eventual outcome. That is the message these controversial statements are sending—probably more out of fear and frustration than an offensive threat.

The views expressed herein are solely those of the author.

A version of this piece first appeared in the South China Morning Post. https://www.scmp.com/comment/insight-opinion/united-states/article/2187284/chinese-military-officers-tough-talk-us

Home » The America Threat: An Imagined View From China – Analysis