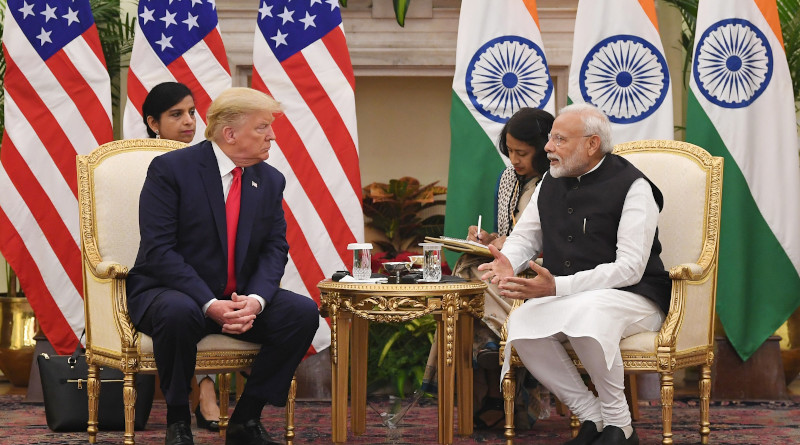 By The White House

(Hyderabad House, New Delhi, India) — PRIME MINISTER MODI:  My friend and President of the United States, Donald Trump; respected members of the American delegation; ladies and gentlemen, good afternoon.  Once again, a very warm welcome to President Trump and his delegation in India.  I am especially really happy that he has brought his family with him on this visit.

In the last eight months, this is the fifth meeting between President Trump and myself.  Yesterday, the unprecedented and historic welcome for President Trump yesterday in Motera will always be remembered.  Yesterday, it became clear once again that the relations between the United States and India are not just limited to the relations between two governments; they are people-driven and they are people-centric.

This relationship is the most important partnership of the 21st century.  And therefore, today, President Trump and I have taken a decision to raise our partnership to the level of a comprehensive global strategic partnership.  President Trump’s contribution in raising our relations to this level have been invaluable.

Friends, during our discussions today, we had a productive exchange on every important aspect of our partnership, whether it is defense and security, our strategic energy partnership, technology cooperation, global connectivity, trade relations, or people-to-people ties.

The increasing defense and security cooperation between India and the United States is a very important aspect of our strategic partnership.  Cooperation in ultra-modern defense equipment and platforms will enhance India’s defense capabilities.  Our defense manufacturers are becoming a part of each other’s supply chains.

Indian forces are today doing the maximum training exercises with U.S. forces.  In the last few years, there has been an unprecedented increase in interoperability between our armies, friends.  In the same way, we are also increasing our cooperation in the area of homeland security and in fighting international crime.

Today, the decision taken on homeland security will further strengthen this cooperation.  We have also taken a decision today to further increase our efforts in order to hold supporters of terrorism responsible.

President Trump has given priority to the fight against the drugs and opioid crisis.  Today, we have also agreed on a new mechanism to fight serious problems, such as drug trafficking, narco-terrorism, and organized crime.

Friends, the recently established strategic energy partnership has become even stronger and, in this area, our mutual investment has grown.  The U.S. has indeed become a very important oil and gas source for India.  Over the last four years, our total energy trade volume is about $20 billion.  Whether it is renewable energy or nuclear energy, indeed our
cooperation finds itself instilled with new energy, friends.

Similarly, in the area of new emerging technologies, India and U.S. partnership has attained new levels, in terms of innovation and enterprise.

In the fields of Industry 4.0 and of the new technologies of the 21st century, the talent of Indian professionals have reinforced U.S.’s companies’ technological leadership.

Friends, India and the United States are committed to openness and fair and balanced trade in the economic sector.  Over the last three years, our bilateral trade has witnessed double-digit growth and it has also become more balanced.

Whether it is energy, civil aircraft, defense, or a higher education, over the last four or five years, just these four sectors has contributed $70 billion to the relationship between India and the U.S.  A lot of this is due to the policies and the willingness of President Trump, and I’m fully confident that, in the years to come, this will further grow.

As far as bilateral trade is concerned, our commerce ministers have had very positive discussions.  President Trump and I, we have both agreed that the understanding reached by our commerce ministers will take it forward to give it a legal shape.  We have also agreed to initiate negotiations for a bigger deal.  We are confident that this will yield good results that will be in our mutual interest.

Friends, cooperation between India and the U.S. at the global level is founded on our common democratic values and objectives, especially in the Indo-Pacific region and other global commons.

Both of our countries agree on the importance of sustainable and transparent financing in the development of connectivity infrastructure across the world.  This mutual understanding and synergy between us is in the interest of not just our countries, but also in the interests of the world at large.

Friends: Indeed, the cornerstone of this special friendship between India and the United States is our people-to-people relations.  Whether it is as professionals or students, the Indian diaspora in the U.S. has contributed the most to furthering these relations.  These ambassadors of India are not only contributing to the U.S. economy with their talent and hard work, they’re also energing [sic] the American society with their democratic values and rich culture.

I have requested President Trump that the contribution of our professionals, in terms of social security, should be discussed further within the framework of a totalization agreement.  This will be of mutual interest to both of us.

President Trump’s visit has played a historic role in further strengthening our relationship in all its dimensions.  Once again, I wish to express my heartfelt thanks to President Trump for coming to India and for taking Indo-U.S. relations to new heights.

PRESIDENT TRUMP:  Well, thank you very much.  And, Prime Minister Modi, this has been a very special visit — unforgettable, extraordinary.  What can you say?  Very, very wonderful to be with you.  Thank you very much.

And Melania and I have been awed by the majesty of India and the exceptional kindness and generosity of the Indian people.

We’ll always remember the magnificent welcome the citizens of your home state showed us upon arrival.  It was a profound expression of strength and of — of real love.  Really, it was love.  And I think everybody saw that; everybody witnessed that for themselves.

The First Lady and I also reflected on the memory of Mahatma Gandhi at his ashram.  And this morning, in Delhi, we laid a wreath in his honor.  We visited one of your nation’s most stunning cultural treasures: the world-famous Taj Mahal.  And we look forward to continuing our visit tonight, doing a wonderful state banquet with President Kovind at the Presidential Palace.

I know Prime Minister Modi will agree that this has been a very productive visit for both of our countries.  Earlier today, we expanded our defense cooperation with agreements for India to purchase more than $3 billion of advanced American military equipment, including Apache and MH-60 Romeo helicopters — the finest in the world.  These deals will enhance our joint defense capabilities as our militaries continue to train and operate side-by-side.

In our discussions, Prime Minister Modi and I affirmed our two countries’ commitment to protecting our citizens from radical Islamic terrorism.  In this effort, the United States is also working productively with Pakistan to confront terrorists who operate on its soil.

Together, the Prime Minister and I are revitalizing the Quad Initiative with the United States, India, Australia, and Japan.  Since I took office, we have held the first Quad ministerial meeting — I guess you would call it a meeting, but it seems like so much more than that — and expanded cooperation on counterterrorism, cybersecurity, and maritime security to ensure a free and open Indo-Pacific.

As we deepen our partnership with India, we remember that our two countries have always been united by shared traditions of democracy and constitutions that protect freedom, individual rights, and the rule of law.

During our visit, we discussed the importance of a secure 5G wireless network and the need for this emerging technology to be a tool for freedom, progress, prosperity — not to do anything where it could be even conceived as a conduit for suppression and censorship.

To guarantee that the infrastructure of the future is built in a safe, transparent, and accountable manner, the United States is working with a range of partners, including Australia and Japan, to create the Blue Dot Network, a major initiative to ensure countries around the world to have access to private sector-led, sustainable, and trustworthy options for high-quality infrastructure development, and that’s what’s happening.

Another major focus of my discussions with Prime Minister Modi is forging bilateral economic relationships that is fair and reciprocal.  Our teams have made tremendous progress on a comprehensive trade agreement and I’m optimistic we can reach a deal that will be of great importance to both countries.

Since I took office, U.S. exports to India are up nearly 60 percent and exports of high-quality American energy have grown by — thank you very much — 500 percent.  That’s great.

As India grows, so do its energy needs.  Yesterday, ExxonMobil signed a deal to improve India’s natural gas distribution network so that the U.S. can export even more LNG to India.

To further strengthen our economic ties, the United States is pleased to announce that the U.S. International Development Finance Corporation will be establishing a permanent presence right here.

America is especially committed to working with India to improve development and empower women entrepreneurs.  That is why my daughter Ivanka attended the Global Entrepreneurship Summit in Hyderabad to highlight women’s economic empowerment.  Ivanka, please — great job you’ve done.  Thank you very much.  (Applause.)  Thank you.

We have since launched the W-GDP initiative, which is now spearheading projects supporting women in the economy from New Delhi to Kolkata.

Prime Minister Modi, we have made tremendous advances for our people over the past two days.  And, working together, I know that our two nations will continue to achieve new breakthroughs, unlock new potential, and forge even brighter futures in the years ahead.

We think we’re at a point where our relationship is so special with India.  It has never been as good as it is right now and I think that’s because the two leaders of each country — really, we feel very strongly about each other.  And we have — we have done something that’s very unique and we’ve made some wonderful deals for each of our countries.

Once again, we want to thank you and the entire nation of India for honoring the United States with its outstanding welcome.  And I‘m pleased to say that the U.S.-Indian partnership is now truly stronger than ever before.  This was a great visit with a tremendous friend and a tremendous leader, Prime Minister Modi.

We won’t be taking questions now; I’ll be having a news conference at 5 o’clock and we’ll take plenty of questions.  Thank you all very much.  Thank you.  (Applause.)