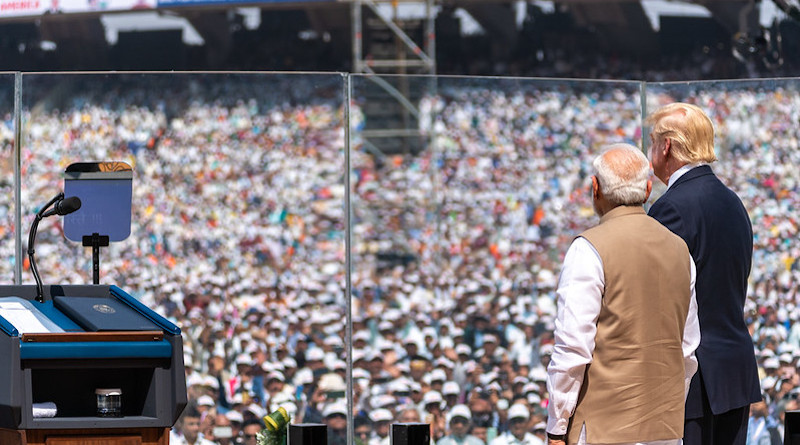 President Donald Trump calls PM Narendra Modi the father of India; according to him he has been successful in combining every section of society like a father combines the whole family through caring for the needs, necessities and reservations of his children.

Including praise for PM Modi, President Trump has raised very serious matters for the nations of the world in his recent speeches. Throughout his tenure, President Trump has remained centred on the idea of “American Exceptionalism.” As evident in his statements, he has already expressed in one of his recent speeches that “The future does not belong to globalists, the future belongs to patriots”. He further explained that this is the rise of nationalism and fall of globalism. Though, whatever the ideology guiding President Trump’s statements and strategies it still creates several complexities for the world, especially for weaker developing nations. In the same way, PM Modi has expressed his ideas and thoughts – as influenced by RSS ideology – which are also based on a similar sense of superiority albeit based around a predominantly Hindu inspired nationalism.

Taking into account this idea of America as the saviour of the world -, as evident in its penchant to intervene in any part of the world – the US has created its own definitions what is just and unjust. Likewise, PM Modi’s more hands-on approach to Kashmir and even to a certain extent Gujrat represents a similar approach couched in a sort of ‘saviour’ complex.

According to PM Modi, the ancient books of Hinduism give the lesson of humanity throughout the world that it is protected under their responsibility. In this regard, they will work in collaboration with other states who also want to protect the same cause of saving humanity as described by both President Trump and PM Modi during the Howdy-Modi gatherings in United States. Thus, hinting at perhaps a dangerous penchant for a more interventionist approach to world politics.

Now this is psychological rhetoric used by different entities to provide a moral justification for their actions in an attempt to make their actions legal and just in front of a specifically targeted audience. As such this kind of manoeuvring, used by States and individual rulers via looking over the changing global dynamics, is all about gaining interests, power, dominance and influence.

There was a period when Narendra Modi was banned in America as well as some other countries of the world. He was banned because of the numerous atrocities, massacres, misconducts and the spread of RSS extremist ideology. He was the central person who was allegedly involved in the massacre of the Babri Masjid in Gujrat, India. He has been an active member of the RSS for a very long period of time. As such he remains famous for his fascist, extremist, hawkish and discriminatory policies imposed on the people of India. These include his harsh policies against the people of Jammu and Kashmir which are glaring proof of several human rights violations.

PM Modi and President Trump have the same ambitions despite the varying differences between the status, development levels, technology, and economies of their respective countries. However, there are numerous similarities within their ideologies, policies and actions as they are mostly inspired by their far-right more conservative electoral bases. Such types of states or individual rulers use beliefs and ideologies for legitimizing their actions. In this regard, United States of America has been practicing these policies and actions within various parts of the world like Palestine, Middle East, Afghanistan. If America is imposing such injustices such a significant share of the world’s population while projecting itself as the saviour of human right violations, then any state with the ability to project power and influence could exploit the situation against the pretext of saving human right violations. As evident, it is this same mentality that has led to the deterioration of the security of various parts of world.

Similarly, Narendra Modi’s ideology has been generating serious issues for the security of South Asia. In this regard, PM Modi along with several other RSS stalwarts have been accused of spreading violence, discrimination and hatred against India’s marginalized communities such as Dalits, Sikhs Christians particularly Muslim and other religious minorities. The recent controversy embroiling the Citizenship Amendment Act (CAA) is an example of such violent and extremist policies which have already resulted in mass agitations and strikes throughout India. The policies and actions adopted by PM Modi have been the cause of various problems within India as well as in the region including the repeated threats from BJP leaders against Pakistan.

When there are nuclear states being led by such leaders who have already fought several wars over multiple issues, they require a certain maturity, sense of responsibility, rationality and understanding in their behaviours as well as the actions of their rulers. Such kind of statements and behaviours portray a picture of madness or irrationality which can generate various problems for the peace and security of both nations as well as regional stability. Both PM Modi and President Trump would do well to ponder over that together during their meeting in India which is considered very important for the strategic partnership of India as well as regional security and stability.