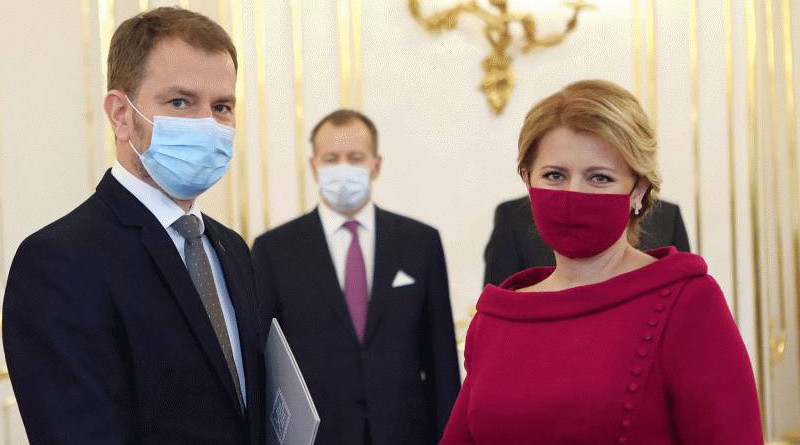 Slovakia’s biggest political challenge in a decade coincides with the worst health crisis in a century. ‘It’s going to be a fight for survival,’ says the country’s new — and untested — prime minister.

Photos of Slovakia’s new coalition government will have a special place in history books: a prime minister and his 14 ministers and vice premiers lined up in suits and dresses, accessorised with protective masks and gloves.

“No other government in Slovak history has ever started in such a complicated situation,“ President Zuzana Caputova said in a speech on March 19, expressing confidence that the cabinet would lead the country through the coronavirus crisis..

The new centre-right government is made up of four coalition parties: OLANO (Ordinary People and Independent Personalities), the anti-establishment party led by new Prime Minister Igor Matovic; the conservative We Are Family; the liberal Freedom and Solidarity (SaS); and the centrist For the People.

After being sworn in on Saturday, this motley crew took over from the government of former premier Peter Pellegrini and the long-ruling populist SMER-SD party.

“People expect the change that they’ve asked for from us,” said Boris Kollar, leader of We Are Family and the new speaker of parliament.

That was a theme echoed by Matovic as he warmed to his new role as prime minister. “Let’s show the nation that this country can be governed fairly,” he said, adding that he would promote an open government that will “rule with the people and for the people”.

Analysts agree that Matovic’s government could not be starting work at a more difficult time. Since March 15, Slovakia has been in a state of emergency as it battles to keep COVID-19 from spiralling out of control.

“When we look at the conditions that previous governments entered into, this one is starting with the worst situation we’ve ever had,” said Grigorij Meseznikov, a political analyst at the Institute for Public Affairs think tank in Bratislava.

“They have to deal with issues that are not ideological or political. Nobody could have expected that.”

To make matters worse, new Health Minister Marek Krajci and premier Matovic say they discovered in their first few hours on the job some major irregularities by the previous government in its handling of the health emergency.

“The worst surprise was that we found we only had 3,000 regular test kits that we can use,” Matovic told TV Markiza on Sunday. “The state material reserves deposit is empty.”

Krajci said that even though the last government bought 100,000 new tests from China last week, they were ineffective for regular testing and therefore useless. “These tests won‘t help us,” he said on Saturday.

As of Sunday, Slovakia had completed more than 3,300 coronavirus tests, with 185 confirmed cases.

According to Matovic, the state company responsible for buying protective materials and medical supplies has inked multi-million-euro contracts with obscure companies with little or no track record.

Besides a lack of respirator masks and protective suits for medical staff, he said he found discrepancies in the state company’s books amounting to millions of euros.

“They bought 200,000 quick tests at a price of 30 euros per piece,” Matovic said. “In China, the price from these manufacturers is two to five euros.”

On Monday, the government announced it would fire the head of the state material reserves company. “Instead of the public interest, he took care of his own business,” Matovic said.

He added: “If we want to win this fight, we need to start the mass testing of people.” He cited the example of Taiwan, Singapore and South Korea — countries that have managed to contain the spread of the virus through extensive testing and contact-tracing.

Matovic said he wanted Slovakia to carry out 3,000 tests a day — 10 times more than it is doing now. The government has set out to buy hundreds of thousands of new test kits with the help of both state institutions and private laboratories.

Composed of 12 men and three women, the cabinet is full of political novices with no previous experience in power.

The new faces personify the parties’ promise to fight corruption. The ministries of interior, agriculture and investment are all led by prominent anti-corruption figures.

Not surprisingly, the most powerful portfolios are in the hands of coalition leader OLANO, which is ideologically amorphous but won the election on an anti-corruption ticket.

Roman Mikulec, the new interior minister, is a former director of the military’s secret service who exposed extensive asset-stripping within the institution in 2013.

Veronika Remisova from For the People will head the deputy prime minister’s Office for Investments and Informization, as it is known. She wants to focus on the effective use of EU funds across Slovakia.

“We will be responsible for justice returning to the judiciary and for preventing anyone from profiting from EU funds and informatization,” she said on Saturday.

“There are people who have shown good qualifications in the past,” Meseznikov said of his new cabinet. “I also see some people I have never heard about before, but there are some who bring in real experience, for example Ms Kolikova or Mr Korcok.”

Korcok is a seasoned diplomat not affiliated with any political party who returns to Bratislava after serving as ambassador to the United States. Before he can take up his new job, however, he will have to undergo a compulsory 14-day quarantine following his arrival from Washington, D.C.

In addition to fighting coronavirus, the new cabinet vows to battle corruption, clean up the judiciary and protect the economy.

Prime Minister Matovic also says he wants to promote tolerance towards minorities. In his first speech after being sworn in, he said he dreamt of a “Slovakia where people from national minorities won’t be moved to the side just because their mothers taught them a different language”.

The new minister of defence, Jaroslav Nad, has professed clear pro-NATO and pro-European views. Meanwhile, Matovic has reiterated that he wants to be a reliable partner for Slovakia‘s foreign allies.

However, critics say Matovic has himself been unreliable and unpredictable.

Over the past decade, he has clashed not only with government politicians but also with his partners from opposition parties, and he makes no bones about portraying OLANO as a movement that breaks the political mold.

Analysts describe him as a populist and conservative politician, able to switch between different ideologies while tirelessly beating his anti-corruption drum.

“He has some good characteristics that can help in a crisis situation like this,“ said Meseznikov from the Institute for Public Affairs. “But he also has traits that can make it even more complicated.”

Meseznikov said Matovic can be hard to predict and is prone to conflict. “We need to prepare for a different kind of prime minister than we got used to before.”

Experts question how stable the new government will be after years of entrenched rule by the nominally left-wing SMER-SD.

Viera Zuborova, a political analyst at the Bratislava Policy Institute think tank, sees the new administration as an “irrational protest against everything that we know under terms like liberal democracy, standard political parties, professional politicians”.

She also expressed concern about We Are Family, which has close ties to the nationalist and far-right parties of French opposition leader Marine Le Pen and former Italian interior minister Mateo Salvini.

A chance for extremists?

Matovic’s coalition has already taken heat for its stance toward Kotelbists – People’s Party Our Slovakia (LSNS), the far-right party of teacher-turned extremist Marian Kotleba, which re-entered parliament with 17 seats.

“They should be given a committee — let them show themselves [as they truly are],” Matovic said last week, prompting a clamour of criticism from journalists and activists.

Zuborova from the Bratislava Policy Institute told BIRN: “I don’t think this approach is appropriate, or that they [LSNS] will show their unprofessionalism or incompetence like that. It will have the opposite effect. They have shown already that they are capable of changing the discourse and rhetoric of some standard parties.”

As parliament started to vote on the heads of parliamentary committees on Friday, a group of civil activists launched a petition.

“We protest against fascists and individuals supporting dictatorships or illiberal regimes receiving public functions,” the petition said. “We view it as a continuation of a dangerous legitimisation of powers and individuals, whose hidden interest is to destroy democracy.”

Historian Jakub Drabik penned an appeal in the Dennik N daily asking parliament not to repeat the mistakes of the past.

“Fascists have got to power in a democratic way twice in history,” he wrote, citing the example of Adolf Hitler in Germany and Benito Mussolini in Italy — dictators who gained power through the ballot box. “Let’s not do that again.”

For political analyst Meseznikov, the coalition’s response to what he regards as a neo-fascist menace is incomprehensible.

“It [LSNS] is clearly a fascist party and to even think about giving them some positions is completely wrong,” he said. “It shows there is a higher acceptance of this party.”

Commentators agree that Matovic’s government faces enormous challenges other than coronavirus over the next four years.

Slovakia is a leader on global corruption charts and public trust in democratic institutions and the justice system is at a historical low. The country is still recovering from the brutal murder of journalist Jan Kuciak in 2018. Slovakia’s judiciary is in crisis, with 13 judges accused of corruption in an unprecedented case.

Meanwhile, the health system was in trouble long before COVID-19 hit.

“It will have to go hand-in-hand with dealing with trust in the state, solving the economic crisis and fighting coronavirus,” Matovic told TV JOJ last week. “We are entering a fight on three battlefronts at once.”