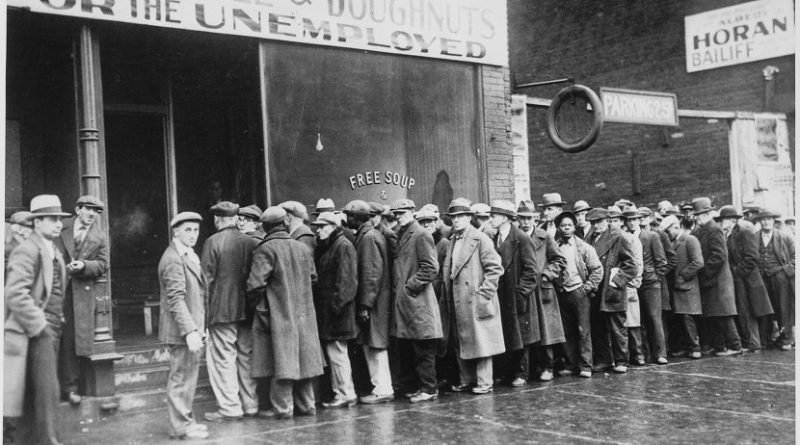 The latest report on new unemployment claims was abysmal, coming in at 4.4 million last week, some 100,000 more than surveyed economists had expected. The continuous claims came in at just under 16 million, an all-time record. Mainstream labor economists estimate that, all things considered, the actual unemployment rate now (which is only officially reported with a lag) is above 20 percent—a rate not seen since the darkest days of the Great Depression. Indeed, all of the job gains since the Great Recession have been wiped out in just a matter of weeks.

What’s worse, even though the official unemployment rate is probably not quite as high as it was in 1933 (when it averaged 24.9 percent), there are reasons to believe that our labor market is currently in even worse shape economically than it was at the lowest depths of the Great Depression. Furthermore, once we take into account insights from Austrian capital theory, we can see why Keynesian hopes for a rapid recovery—and calls for longer lockdowns due to health concerns—are misguided.

Why the Current Unemployment Is Worse Than the Great Depression

In the first place, there is a technical reason that the government’s official unemployment figures for 1933 are misleading: at that time, people who held “make work” jobs funded by government relief efforts were counted as unemployed. (In my opinion, this was the correct judgment.) If instead we use adjusted figures (according to Darby 1976) then annual unemployment during the Depression peaked at 22.5% in 1932. In other words, if we count unemployment in the 1930s the way we count it today, then arguably the “official” rate is already the worst in US history, period.

At the same time, plenty of other businesses remained afloat, but they cut back their workforces. Again, businesses laid off the most expendable workers, as judged by the managers/owners.

Intuitively, during the Great Depression (and any other standard recession, for that matter), the economic system sheds those jobs that are the least important, in order to gradually reallocate workers into niches that are more appropriate. The deeper the malinvestments have been during the boom phase, the more workers will find themselves in unsustainable outlets when the crash occurs. But given the fact that X-percent of the jobs need to disappear, the market economy during a normal downturn sheds them in the most economical areas, causing as little disruption to the flow of goods and services as judged by the consumers.

In complete contrast, today the principal criteria for which 20+ percent of current workers have lost their jobs are (1) they don’t work in an occupation that can be done from home and (2) they aren’t deemed “essential” by government officials. Naturally, these criteria don’t come close to approximating what is the most economical way to shed jobs, from the perspective of consumers.

An Analogy with the Household Budget

In the previous section, I argued that our current labor market disruption was much more economically significant than what was seen even during the depths of the Great Depression. Let me use an analogy to drive home the point.

Suppose your household were forced to restrict its spending by 25 percent. (Indeed, this might not be a mere hypothetical for many unfortunate readers right now.) However, there are two options for achieving this outcome. Under Option #1, the adults in the household get to decide where they will cut their spending, subject to the requirement that they reduce the total by 25 percent.

Under Option #2, an outside government official—in consultation with various experts—forces the household not only to cut spending by 25 percent, but also specifies where the spending cuts will occur.

Which option would be more burdensome? The answer is clearly #2.

Likewise, given that the economy has to endure an unemployment rate above 20 percent, it’s far preferable if consumers and business owners get to effectively pick (through voluntary market actions) which workers are laid off. It is far more devastating to endure our current situation, in which the workers who have lost their jobs have been selected by technological facts (i.e., whether a job can be done remotely) or through the political process.

Besides the important distinction between layoffs and lockdowns, there is another reason that Keynesian economists are underestimating the devastation wrought by the current policies: Keynesians typically don’t have a long-term “capital structure” in their models the way Austrians do.

The problem here is that Summers is viewing things through the lens of aggregate demand: following a financial crisis, consumers and businesses try to pay down debt, and this means that only government pump-priming can boost total spending up to full employment levels (especially if we’re in a liquidity trap).

But since that’s not the issue here, Summers thinks that once the lockdown ends all of the “pent up” consumer demand will return and things should go back to normal. Why, it will be just like people going back to work on a Monday.

Yet what Summers is leaving out is that there’s more to the economy than labor going into a production function in order to spit out goods for purchase. Each of us at our respective jobs uses all sorts of intermediate goods produced by other people in the distant or recent past.

The weekend, or tourist season at Cape Cod, is a very predictable event, and we have enough inventories (in food, refined gasoline, etc.) to carry us over the hump. Likewise, if a certain area of the country gets hit with fires, an earthquake, or a tornado, such that workers in that region can’t get to their jobs even for weeks at a time, it’s manageable because the rest of the economy can pick up the slack.

But in our current lockdown the entire country has been forcibly prevented from doing business as usual. The longer this process continues, the more our integrated, complex capital structure is going to break down. It does no good for the carpenters to go back to work if there are no new nails available for them to use.

Most states are currently poised to begin a phased return to work within the next week or two, so hopefully we can get ahead of the breakdown before it becomes too bad. But those economists arguing that we should extend the lockdown for many more months, and that we can use government “relief spending” to carry us over the hump, are being quite blind to the dangers in such a policy.

As a final note, let me mention that in our household we are being extremely cautious about the coronavirus because of my wife’s medical history. I am not elevating concerns of GDP over health.

In fact, from a purely self-centered standpoint I want low-risk people to leave their homes so that they can get the virus and (hopefully) only suffer mild symptoms, so that its overall prevalence in the community quickly fades away. This will make it safer for members of my household, if and when we carefully venture out into the world after this initial period of isolation.

*About the author: Robert P. Murphy is a Senior Fellow with the Mises Institute. He is the author of many books. His latest is Contra Krugman: Smashing the Errors of America’s Most Famous Keynesian. His other works include Chaos Theory, Lessons for the Young Economist, and Choice: Cooperation, Enterprise, and Human Action (Independent Institute, 2015) which is a modern distillation of the essentials of Mises’s thought for the layperson. Murphy is co-host, with Tom Woods, of the popular podcast Contra Krugman, which is a weekly refutation of Paul Krugman’s New York Times column. He is also host of The Bob Murphy Show