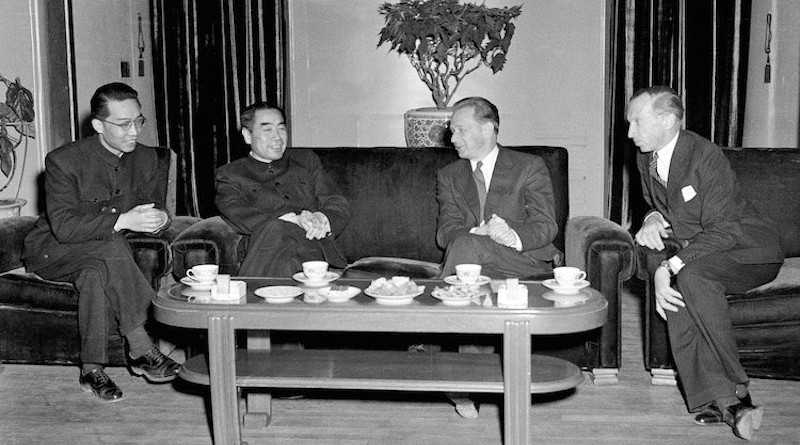 If U.S. President Theodore Roosevelt believed that if you “speak softly and carry a big stick: you will go far”, half a century later and many thousands of miles away, another man practised it. His name was Zhou Enlai.

If Mao Zedong represented the crude face of Chinese communism, then Zhou was the epitome of its refinement. Where Mao preferred to exercise his power from “out of the barrel of a gun”, Zhou preferred to seduce his opponents through word and gesture in the pursuit of national self-interest, with the elegance of an opera star. The stick was used rarely, and only when all other means of persuasion failed.

When General Douglas MacArthur’s armies crossed into North Korea, Zhou summoned the Indian Ambassador in Beijing to deliver a message to the Americans: “If the U.S. troops cross the 38th Parallel… we will intervene.”

The manner of his delivery was as subtle as its message was blunt. Zhou could have thrown down the gauntlet in public but chose to give diplomacy a chance.

When, however, the U.S., regardless of Chinese concerns, crossed the 38th Parallel, the Chinese attacked and brought the world’s greatest power to a standstill.

A few years later, in 1954, the Chinese made their entry onto the world stage in Geneva. The Vietnamese were winning against the French in the First Indochina War, and the Americans were preparing to intervene fearing that another “domino” would fall to communism. China’s self-interest lay in ending this war while denying the U.S. a foothold in its backyard. Zhou’s strategy was to undermine western unity. His watchwords were persuasion and compromise.

Describing his presence in Geneva as “a performance on the stage”, he deployed all his charm, vitality and intelligence. He even gave “face” to the French who had just lost to the Vietnamese in the battle of Dien Bien Phu, by travelling the “extra mile” to meet Prime Minister Pierre Mendès-France to secure the peace. At the start of the Conference, U.S. Secretary of State John Foster Dulles had pronounced that the “Chinese communist regime will not come to Geneva to be honoured by us, but rather to account before the bar of world opinion”. Playing the weaker hand, Zhou turned the tables on the U.S.

A year later, at the Afro-Asian Conference in Bandung, Zhou used the same tactics to pursue another objective; the leaders of the Afro-Asian countries. He deliberately kept a low profile, allowing Prime Minister Jawaharlal Nehru and Indonesian President Sukarno to take the lead. His tactic, he reported to Mao, was “not to be involved in provocative or disruptive debate”. His guidance to his team was to “strive to expand the united front of the world peace force… and create conditions for establishing diplomatic work or diplomatic relations between China and a number of Afro-Asian countries”.

All roads led to Beijing

Zhou’s style of diplomacy came to define Chinese foreign policy over the next half-century. The strategy was consistent: avoid isolation, build solidarity with non-aligned countries, divide the West. The tactics were called ‘united front’ — isolate the main threat by building unity with all other forces. It was a game that Zhou would play with consummate skill.

Under Zhou, diplomats of calibre kept the ship of state steady in a churning sea full of storms, some self-made like the Cultural Revolution. When the tide rose, these diplomatic fishermen gathered the fish — expanding China’s global presence and gaining international acceptability. When it ebbed, they saw to it that the ship remained firmly moored. They navigated the Cold War, playing the Soviets against the Americans.

To relieve pressure, Zhou opened border talks with the Soviets and channels to the U.S. Public animosity did not deter him from turning on the full extent of his charm on either Alexei Kosygin or Henry Kissinger. In February 1972, he persuaded U.S. President Richard Nixon to abandon Taiwan when the communists had not exercised actual sovereignty over that island even for a single day since 1949. It was a staggering act of diplomacy.

In the 1980s, when Deng Xiaoping took up the reins, Zhou’s ‘sailors’ continued to navigate the Chinese ship through the early days of opening up to the outside world. Deng supplemented Zhou’s strategy with a “24-Character Strategy” of his own: “Observe calmly; secure our position; cope with affairs calmly; hide our capacities and bide our time; be good at maintaining a low profile; and never claim leadership.”

It became the ‘mantra’ of Chinese diplomacy. Chinese diplomats measured their words and kept their dignity. They projected power but rarely blustered. They were masters of their brief because Zhou had taught them that the real advantage in negotiations was to know more than the other side. They flattered acquaintances, calling them “old friends”. They built relationships by making it a point to engage the less friendly interlocutors with greater courtesies than friends.

Behind closed doors, they were tireless in whittling down opposition through negotiation, and skilful in putting the onus of responsibility for failure on the other party. And occasionally, ever so subtly, they would hold out a veiled threat with a look of concern rather like an uncle anxious to save you from embarrassment. But they rarely offended.

The 1980s and 1990s were the high noon for Chinese diplomacy. All roads led to Beijing. U.S. President George Bush and Russian leader Mikhail Gorbachev made their way to the Forbidden City. They normalised relations, settled borders and won hearts and minds through general financial help. So seductive was Chinese diplomacy that the Americans even broke their own sanctions imposed after the 1989 ‘Tian An Men Incident’, within a matter of four weeks.

A decade later, the U.S. and the European Union bought into Chinese assurances that it would soon transition to a market economy, and helped steer it into the World Trade Organization.

Breaking away from moorings

Deng died in 1997. China prospered just as Deng had imagined. It began to occupy centre stage in world diplomacy, but the ship began to come apart from its moorings. A new generation of diplomats, with knowledge of the English language and a careerist mindset, has started to whittle away at the anchors laid down by Zhou and Deng. Arrogance has replaced humility. Persuasion is quickly abandoned in favour of the stick when countries take actions contrary to Chinese wishes.

The Chinese pursue unilateralism instead of compromise in the South China Sea. In place of ‘united front’ tactics, they are bent on creating irritations simultaneously with multiple neighbouring countries. To avenge the ‘Century of Humiliation’ that China endured in the hands of western imperial powers from roughly 1839-1840 to 1949, they adopt a one-size-fits-all approach, uncaring that much of the world has done nothing to China and, indeed, shares a similar historical experience.

Statements of fact or reasoned opinion are seen by them as insult or humiliation. Foreign governments are educated about their responsibilities in managing the media and the narrative, even as the Chinese manipulate the same media to serve their purposes. They expect to receive gratitude for everything they do, including handling COVID-19, as if it was only done with the foreigner in mind. The veneer of humility has thinned. The reserves of goodwill are fast depleting. The ship seems to be adrift at sea.

China, post-COVID-19, will be operating in a very different external environment. It may wish to recall what Kissinger told the White House staff in July 1971 after his trip to the country: “The Chinese style is impressive. The Russians will fight you for every nickel and dime, and elbow you at every level, and lose a million dollars of goodwill in the process. The Chinese have a sense of the longer trends and focus on that, not on ploymanship.” The Chinese appear to have lost that style. If they cannot regain it, the ship of diplomacy could be dragged further afar from the shore on the receding tide.

*This article by a former Foreign Secretary of India and a former Ambassador to China first appeared on The Hindu on 20 March 2020. It is republished because of an insider’s view of the changing nature of China’s diplomacy characterised by unilateralism and a one-size-fits-all approach. “China, post-COVID-19, will be operating in a very different external environment.”