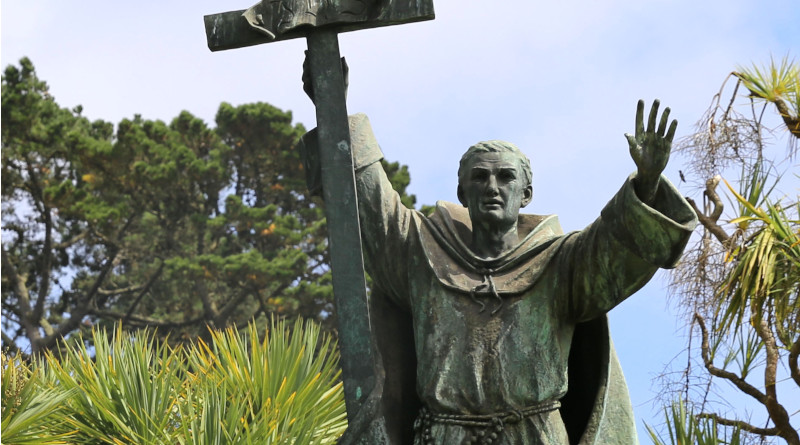 As rioters across the United States target statues depicting historical figures, the Bishop of Madison, Wisconsin on Tuesday denounced that destruction, along with calls to destroy some depictions of Jesus Christ and the Blessed Virgina Mary.

“Should certain statues be placed in museums or storage? Perhaps. Should we let a group of vandals make those decisions for us? No,” Bishop Donald Hying of Madison said in a June 23 letter.

“If we allow the commemorative and visual history of our nation to be destroyed by random groups in the current moment of anger, how will we ever learn from that history? Does toppling and vandalizing a statue of George Washington because he owned slaves, really serve our country and our collective memory?”

Hying also responded to a recent viral tweet from podcast host and activist Shaun King, who said June 22 that “statues of the white European they claim is Jesus” are a form of “white supremacy” and ought to be torn down, along with “all murals and stained glass windows of white Jesus, and his European mother, and their white friends.”

Hying noted that every culture, country, ethnicity, and race “has claimed Jesus and the Blessed Virgin Mary as their own,” depicting them with their culture’s skin color and dressed in their culture’s garb.

The Catechism states in paragraph 1149, that “the liturgy of the Church presupposes, integrates and sanctifies elements from creation and human culture, conferring on them the dignity of signs of grace, of the new creation in Jesus Christ.”

For example, the bishop mentioned, Our Lady of Guadalupe appeared as “mestiza,” or “mixed” race; African art depicts Jesus as black, and Mary in African cultural garb; and there are numerous Asian representations of Mary as well.

While at some points in the Church’s history, some have mistakenly equated “the fullness of Catholicism with European culture,” Catholics should instead strive for “unity in that which is essential, and diversity in those things which are not,” Hying said.

“In this context, are white representations of Christ and His Mother inherently signs of white supremacy? I think not. Because the Son of God became incarnate in our human flesh, does not all of humanity – every race, tribe, and tongue – have the spiritual ability to depict Him through the particular lens of their own culture?” the bishop asked.

Depictions of Jesus are holy to Christians, he said— they are physical manifestations of God’s love, and remind us of the “nearness of the divine.”

“The secular iconoclasm of the current moment will not bring reconciliation, peace, and healing. Such violence will only perpetuate the prejudice and hatred it ostensibly seeks to end…Only the love of Christ can heal a wounded heart, not a vandalized piece of metal,” Hying concluded.

In Madison on Tuesday, rioters pulled down a statue of Hans Christian Heg— an abolitionist who famously fought against Confederates and slave-catchers— and threw it into Madison’s Lake Monona. Though the Heg statue has since been recovered, it suffered serious damage and is missing its head and a leg.

A statue known as “Lady Forward”— a replica of a famous statue created by a woman, and depicting progress— also was torn down and was dragged at least a block through the center of Madison by rioters.

Across the country, protestors have in recent days toppled statutes of Confederate leaders and figures associated with slavery, but have also, in some places, pulled down statues of Catholic saints, abolitionists, and other figures.

The violence in Madison reached a fever pitch Tuesday night when protestors attacked and injured State Senator Tim Carpenter (D-Milwaukee) near the Wisconsin state capitol, ostensibly because Carpenter was filming the protests with his phone.

Speaking to CNA on Tuesday, Hying emphasized that many of the most successful protests of the Civil Rights era were predicated on Christian ideas of nonviolence, and a Scriptural understanding of the human person.

The principles of Catholic social teaching— the dignity of the human person; the value of solidarity, “we’re all in this together;” a preferential option for the poor— need to be present in any Catholic’s response to injustice, he said.

“If it’s not grounded in that, then it really ends up being about power— that I need to assert my power, in situations where I feel powerless,” he explained.

“It becomes a struggle over power, rather than a transformational relationship into how God wants us to live as brothers and sisters.”

Some Catholic figures on social media have called for bishops to attend the rallies in their cities and physically prevent rioters from tearing down statues.

Hying said anything a bishop does in public must be rooted in a “prayerful, spiritual response,” and not in any political motivation.

Any political movement that does not recognize the dignity of every person is prone to “power politics” and violence, Hying said.

Many Catholics and even some bishops have attended and prayed at peaceful rallies across the country.

Hying said it is clear to him that the violence and ill-treatment of Native Americans and the oppression of African Americans through slavery are two of the country’s greatest moral failings.

The situation requires, he wrote in his letter, better knowledge of history and respectful discussions about statues, buildings, and memorials.

“We must study and know this history in order to transcend it, to learn from it and to commit ourselves to justice, equality, and solidarity because of it,” Hying said.

“At the same time, even the worst aspects of history should be remembered and kept before our eyes. Auschwitz remains open as both a memorial and a museum, so that humanity never forgets the horror of the Holocaust.”

Protestors in San Francisco’s Golden Gate Park tore down a statue of St. Junipero Serra on June 20, along with statues of Francis Scott Key and Ulysses S. Grant. In Los Angeles the same day, rioters pulled down a statue of Serra in the city’s downtown.

While many activists today associate Serra with the abuses that the Native Americans suffered, biographies and historical records suggest that Serra actually advocated on behalf of the Natives against the Spanish military and against encroaching European settlement.

Archbishop Salvatore Cordileone of San Francisco decried “mob rule” that led to the tearing down of Serra’s statue in his city. Bishop Thomas Daly of Spokane, Washington, a California native, also condemned the statues’ destruction.

“The Church, by no means, desires injustice to go unanswered, but two wrongs do not make a right. If we cannot acknowledge the good of a saint such as Junipero Serra, we risk preferring ideology to the truth,” Daly said June 22.