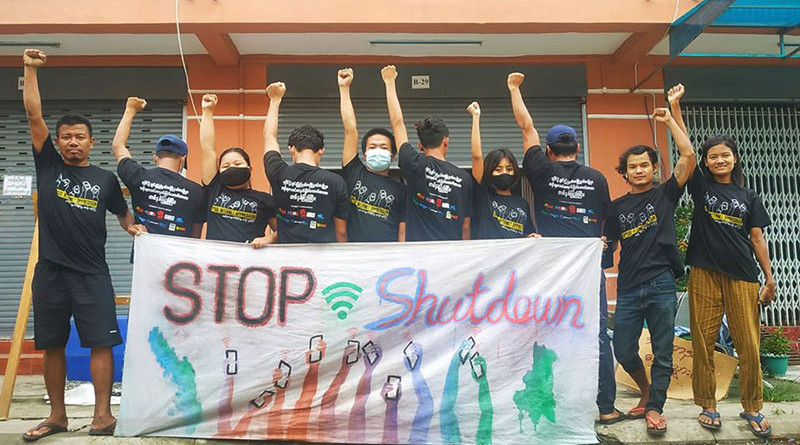 A Tatmadaw spokesperson said the leaking of sensitive information about military operations and positions was one of the primary reasons for an internet ban in parts of Arakan State that entered its second year over the weekend.

The secretary of the Tatmadaw True News Information Team, Brigadier-General Zaw Min Tun, was speaking at a news conference in Nay Pyi Taw on June 23.

“Military information such as which military column is moving from what location to which area is uploaded on social media,” he explained. “And there is some information that makes people in the country and abroad misunderstand the Tatmadaw. So, we have to shut down the internet in the region for security reasons.”

Zaw Min Tun described the internet embargo as also intended to put a stop to the dissemination of extremist rhetoric, hate speech and misleading information, saying the Tatmadaw had no plan as yet to recommend a lifting of the ban to the government.

The long-running deprivation of internet access has drawn much criticism over the past year, and this week Pyithu Hluttaw lawmaker U Pe Than piled on.

“In other countries, the internet is not shut down to avoid hate speech and [leaking of] military affairs. If such action is imposed [in other countries], the ban is lifted in short order. Our country has imposed the internet ban for a year. It should not happen,” said U Pe Than, who represents Myebon Township.

The government should resolve its issues using other approaches and should lift the internet ban, he suggested.

He added that internet access was an important accountability mechanism for a war-ravaged people vulnerable to potential human rights abuses.

The government imposed its internet ban on Buthidaung, Maungdaw, Rathedaung, Ponnagyun, Kyauktaw, Myebon, Mrauk-U and Minbya townships in Arakan State, and Paletwa Township, on June 21, 2019. The ban was lifted in some of the townships on September 1, only to be reimposed on February 3. Maungdaw Township saw its internet access restored for a second time on May 2.

More than 1 million people across the eight affected townships in Arakan and Chin states remain without internet access.

Since Hitler dismembered Czechoslovakia and created the protectorates of Bohemia and Morava, most people have not wanted to use the