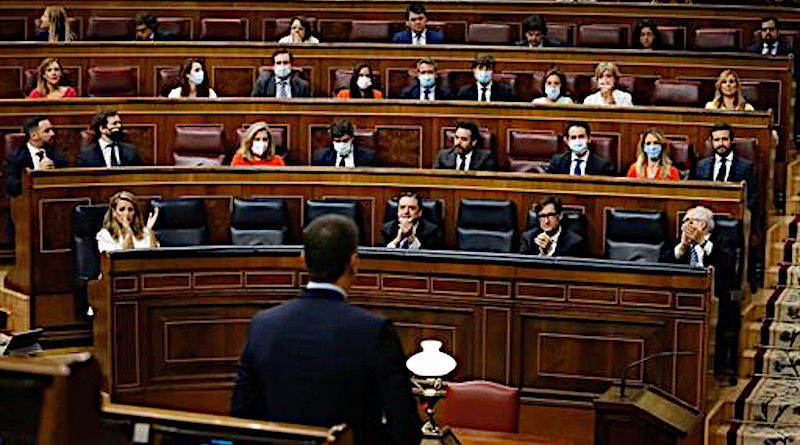 Spain’s Prime Minister Pedro Sánchez called in the Lower House of Parliament for unity in defense of Spain’s interests in the European Union. He also stressed that there is no impunity in Spain and justice must work independently.

At the government control session in the Lower House of Parliament, Pedro Sánchez reiterated that unity “not only saves lives, but also companies and jobs”.

“If you want to reach agreements”, Sánchez responded to the MP for the People’s Parliamentary Group, Pablo Casado, “let’s start with the basics, and jointly defend with the government Spain’s interests in negotiations on the Recovery Fund in Brussels”.

Sánchez also called for respect for rights and freedoms in Spain not to be brought into question before the EU institutions, and to support the creation at a European level of a tax on the large digital corporations, which the United States Administration is opposed to.

“In short, if you want to definitively work side-by-side, what you should do is defend Spain’s interests in Europe and outside of Spain, which is what the government is doing”, he declared.

In his response to the question posed by the MP for the Republican Parliamentary Group, Gabriel Rufián, the Prime Minister argued that no-one goes unpunished in Spain, since “impunity means that punishable actions are not penalised” by those who must uphold this; in other words independent judicial power.

“No-one can be outside of the actions of the judiciary, but nor can anyone, above all the legislative power, be attributed the role of judge or prosecutor”, Sánchez stated.

Pedro Sánchez remarked that the government’s position on this matter is firm and clear. “Not to interfere in the work of judges and prosecutors”.

The goals and commitments of the investiture agreement remain in force, although compliance by some have been slowed down by the COVID-19 pandemic – this was the response Sánchez in the control session to the MP from the Plural Parliamentary Group, Joan Baldoví.

Pedro Sánchez added that, despite the fight against the health emergency demanding a great many political and material resources and action, the government has continued working over these months on essential questions for the Region of Valencia and the other autonomous regions.

In this regard, Sánchez highlighted the commitment of the Minister for the Treasury, María Jesús Montero, to send “the first outline” of the new regional financing system in the month of November.

Furthermore, the government, added Pedro Sánchez, has set up the non-refundable fund of 16 billion euros for the regional governments, has updated the amount of the payments on account under the regional financing system and has prepared the necessary paperwork so that the regions can re-allocate unassigned European funds.